WESTFIELD – Gateway Senior Little Leaguer Johnny Haskell set the tone for his team by clubbing a lead-off homer to begin Friday night’s district tournament game at Hampton Ponds Field. It was a harbinger of things to come.
Haskell went 3-for-4 at the plate with a HR, 2 RBIs, and a run scored, and tossed a two-hitter in 3 1-3 innings of work on the mound in Gateway’s 11-0 win over Westfield.
The Gateway starter recorded seven strikeouts.
Gateway’s Matt Hewes broke it open with a third-inning grand slam. The long ball made it 6-0. Jayden Marge drew a bases-loaded walk one batter earlier, and one batter later, Haskell singled. A run scored when the outfielder misplayed the ball.
Haskell’s RBI single in the sixth made it 8-0. Smart Gateway base running and error-plagued defensive plays from Westfield allowed a ninth run to score. The lead ballooned to 11-0 when a two-out, two-run single from Marge found its way into center field.
The game seemed to cruise along, save for the walks, but slowed to a crawl in the sixth inning when Westfield catcher Alec Best was injured on a play at the plate, and the umpire was smacked with a pitch on a misplayed ball from the backup catcher.
Gateway reliever Trevor Bruno closed out the final 2 2-3 innings with hitless ball. He struck out three batters. 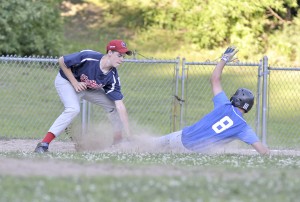