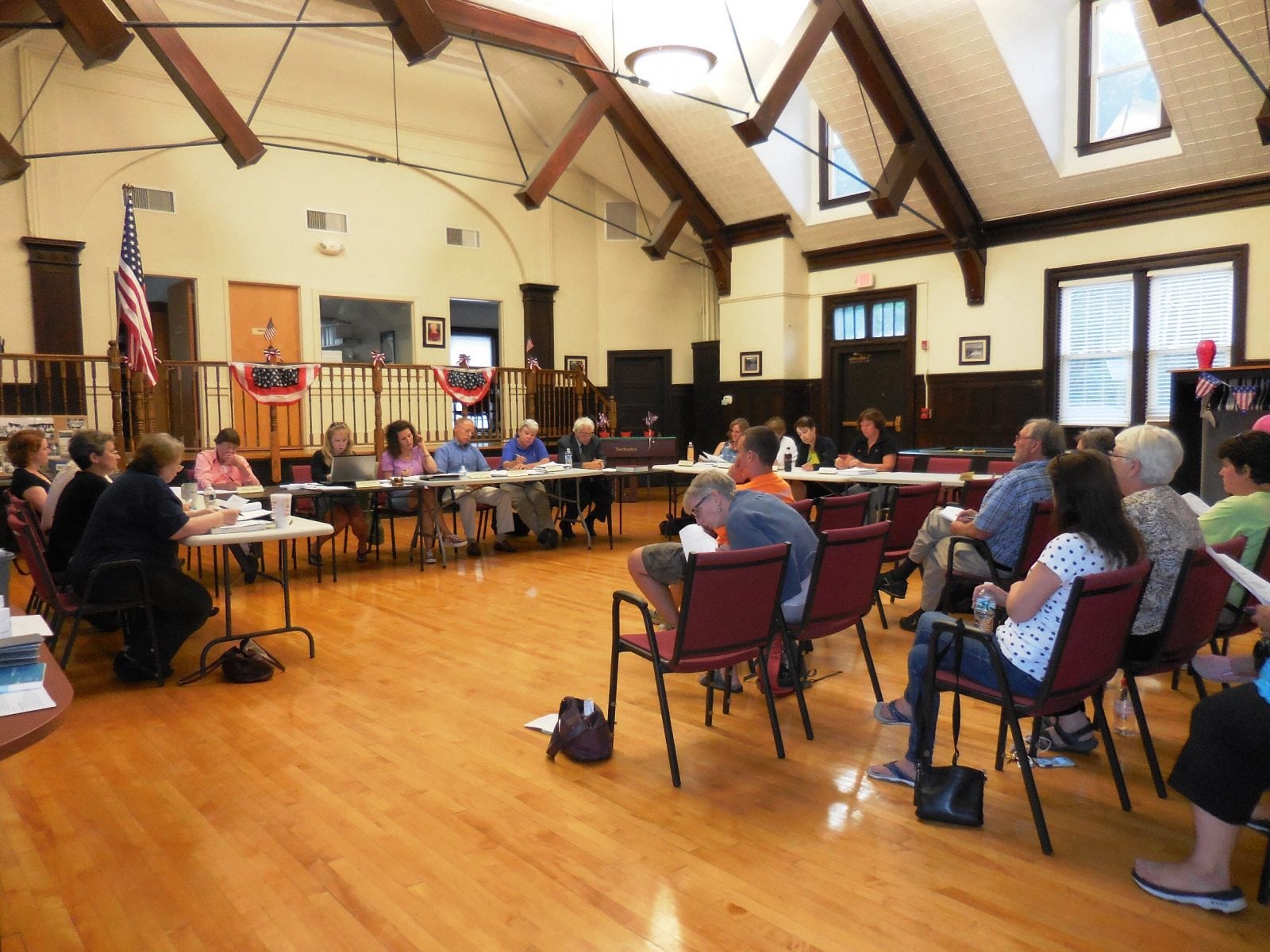 RUSSELL – The Gateway Regional school committee met in the Russell Senior Center Wednesday evening, in the first of their meetings on the road. In August, they will travel to Middlefield, and in September they will meet in Blandford and Montgomery.
During the public input portion, Darlene McVeigh of the Huntington Finance Committee challenged the school committee on their vote to transfer $106,658 in unexpended insurance funds into the new OPED (Other Post Employment Benefits) Liability Trust Fund at their last meeting. McVeigh questioned the wisdom of putting funds into a restricted account instead of E&D (Excess and Deficiency), when mitigation funds are uncertain, and two towns may be forced to tax above their levy limit. Funds that go into E&D offset town assessments.
Dr. David Hopson, school superintendent, explained that should the mitigation funds not come through, they could then use the money in the OPED account towards the health insurance line item in the budget, and free up the same amount for E&D.
Gateway Business Manager Stephanie Fisk said Gateway has $14 million in unfunded benefits, and she and Hopson thought putting the unexpended funds into the OPED account would be a place to start.
Later in the meeting, Hopson reported that the budget had gone to the governor on Wednesday for his signature. Hopson said according to Rep. Stephen Kulik, the supplemental budget which would contain the mitigation funds should be voted on within fifteen days. Hopson said that the fifteen day extension voted by the School Committee at the last meeting gives them until July 28 to propose a new budget. He said they could wait until the supplemental budget is released to vote on a new budget, or take action at this meeting.
“I’d rather take action tonight, because in my experience, special meetings in the summer often don’t produce a quorum,” Ron Damon of Huntington said. Damon has served on the Gateway school committee for more than thirty years.
“If we vote on a budget tonight,” Kennedy said. “we’ll have to send in the same budget. We can’t send a budget to the towns that they can’t afford.”
Hopson said he recommended setting a special meeting on Wednesday, July 22. He said it would require a two-thirds vote from the committee for passage of a new budget.
“Failure to have the committee take action on a new budget means the old budget,” Hopson said. A motion was made and passed to set the special meeting at Gateway.
“I suggest that we send a special letter to school committee members about its importance,” Shirley Winer of Chester said, referring to the special meeting.
The School Committee was then tasked with reorganizing, nominating and electing officers. There were no contests, and all officers will remain the same: Michele Crane of Blandford, chairperson;Martha Otterbeck of Chester, vice-chairperson; Stacy Stewart of Gateway, secretary; Deborah Kuhn of Gateway, district treasurer; Ruth Kennedy of Russell, legislative contact; and Dupere Law Office as counsel and negotiator for the committee.
Crane raised the issue of School Committee professional development that was moved forward at the last meeting. She suggested members first complete a self-evaluation survey provided by MASC (Massachusetts Association of School Committees).
There was some concern expressed about the structure of the evaluation and survey. Mary Ann Laurie of Russell asked whether the committee had previously voted it down.
Otterbeck made a motion to take the survey, saying, “We’ve got to start somewhere. I was someone who brought my concern to the committee about the lack of cohesion.”
“It may not be perfect, but at least it’s a discussion starter,” Sarah Foley of Middlefield said.
The motion passed with one opposed.
Crane then asked that the vote from the executive session at the end of the last meeting be announced. In the session, there was a unanimous vote to support one day’s pay for each non-union member who took furlough days.
Hopson brought to the School Committee a request by (GTAC) Gateway Towns Advisory Committee and voted on at several town meetings to look ahead at the sustainability of the district, and what it will look like in 2025. He laid out a suggested quarterly calendar for action, beginning with Gateway leadership team meetings, then broadening it to focus group discussions among students, alumnae, parents, staff, community members and town officials. The discussions would then be compiled, and action plans formulated. Hopson said that GTAC also sees a potential for looking at shared services and shared superintendencies that should be considered.
Wendy Long, district grant writer, announced that Gateway has a new vendor (School Point) and a new website at www.grsd.org. “One of the features we really liked about School Point is that it fits on a mobile device,” Long said.
Hopson said they had done a good job of transferring information over, although it was not yet complete.
“There are a number of links that aren’t working the right way, i.e. the budget, which didn’t transfer over.”
He said the new website is $3,000 cheaper than the old website, which was originally paid for by federal funds.