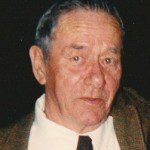 WHITEFIELD, NH – True to his word, “I will be right behind you,” George R. Pinkham, 89, Whitefield, NH died on Monday, April 22 , thirty-seven days after the passing of his wife of sixty-six years in March. His death at Lafayette Center in Franconia, NH, followed a worsening of his Parkinson’s Disease. Born in Whitefield in 1923, George was the first child and only son of Laura Michaud Pinkham of Whitefield and George R. Pinkham, originally of Marblehead, MA.
After the death of his father in 1929, George became the “man of the family” at the age of just under four, a position he held all of his mother’s life, as she raised her three children single-handedly through the Great Depression. George recalled the many times he would ride his bicycle along roadsides, picking up bottles that he would then take to Elgosin’s for redemption. He always did what he could to help his mother and two sisters. Being brought up poor, he would tell his own children, was no excuse – you just had to work harder, which is what he did all of his life.
After graduating from Whitefield High School in 1941, George worked briefly before being drafted into World War II, serving with Battery A of the 733rd Field Artillery Battalion. Without a doubt, his World War II experience was a defining point in his life. During almost three years, he served in Europe, participating in the Invasion of Normandy, as well as campaigns in northern France, the Rhineland, and Central Europe. His military experiences spurred his lifelong interest in military history of the US Civil War and World War II. He enjoyed producing his German military artifacts when his children and grandchildren expressed interest in seeing them and hearing his “war stories.” Most recently, his daughter was researching these items and identifying them for preservation.
Upon returning to Whitefield in 1946, he met his future wife, Daphne Brigham, at a dance in Groveton. They married in 1947 and had four children. George was a foreman at Mellin and Quincy, Inc. in Whitefield when lightning struck the furniture factory, causing the loss of the business. Following local employment, he became a rural mail carrier, retiring from that position after twenty-five years. In his retirement, he enjoyed activities that both he and his wife could enjoy together: bicycle-built-for-two riding, walking, square dancing as members of the Littleton Squares club. He enjoyed golf, and his wife would often caddy for him in order to get exercise and to find lost golf balls. They traveled with their daughter with the Canadian Maritimes; Quebec; Pennsylvania Amish land; Niagara Falls; Williamsburg; Washington, DC; and Civil War battle sites among their favorite locales.
George took great pleasure in decorating his Brown Street property for Christmas. The thousands of lights he used in these holiday decorations took him hours and hours to place and maintain. One of his favorite holiday memories was made when the workers at MKF next door to his property asked him to turn on his lights early in the morning in order for them to enjoy the sight when they drove by on their way to work. He was happy to oblige. As a younger man, he coached Little League teams for many years; in later years he enjoyed being a spectator at his sons’ soccer games and events his grandchildren participated in. He maintained memberships in the Littleton Elks club, the Whitefield VFW, and the Whitefield American-Legion.
George is survived by four children; Barbara Pinkham of Whitefield, NH, George R. Pinkham III and his wife Suzanne of Henniker, NH, Linda Pinkham Berry and her husband John of Russell, MA, and David Pinkham and his wife Meryl of Gilford, NH; as well as by one sister, Corinne Pinkham Glines and her husband Chester of Deerfield, NH. In addition are five grandchildren; Kasie Berry Sisneros and her husband Steven of Prescott Valley and Scottsdale, Arizona, Ryan Pinkham of Chicago, IL, John Berry of Chester, MA, Devann Pinkham Steele and her husband Kevin of Louisville, KY, Brittany Pinkham of Chapel Hill, NC, and two great-grandsons; Christopher Pinkham of Concord, NH, and Steven Sisneros of Arizona. He considered his niece, Jeanne Bilodeau, of Dalton, NH, and friend, Carol Anne Gillis, of Littleton, NH, part of his immediate family. Many nieces and nephews round out his list of survivors. Finally, he leaves behind his beloved Abyssinian cat, Sheba II. He was predeceased by both of his parents and a sister, Dorothy Pinkham Emo.
Burial of their parents will be private however, the children of George and Daphne Pinkham will be having a joint remembrance of their parents at Ross Funeral Home, Whitefield Chapel, 69 Lancaster Rd, Whitefield, NH on Saturday, May 4, at 11:00 a.m.
In lieu of flowers, memorial donations in his name may be sent to Second Chance Animal Rescue, 1517 Meadow Street, Littleton, NH 03561. For more information or to send a private note of condolence to the family go to www.RossFuneral.com