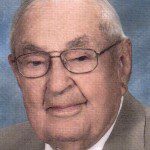 WESTFIELD – Gustave A. Strebel of Westfield, died peacefully at home on Sunday, April 21, 2013. He was 99 years old. He was born March 29, 1914 in Syracuse, New York.
He graduated from the University of Rochester School of Optometry and later received his Doctorate from the New England College of Optometry. He practiced optometry in New York State until 1944, when he relocated to Oak Ridge, Tennessee, to establish the country’s first industrial vision program, for Eastman Kodak Company, which was participating in the Manhattan Project.
After World War II, he remained with Eastman Kodak in Rochester, New York, where he was head of the Eye Service Dept. and a pioneer in the field of industrial eye safety. Retiring from Eastman Kodak in 1977, he lived briefly in Avon, Connecticut, before settling in Westfield in 1980. After his wife of 62 years, Adelaide Corridon Strebel, died in 1999, he became active in the Westfield Senior Center, where he was a regular. There he taught beginning computer skills; founded a small band, the Rhythm Ramblers, with which he played keyboard; and was an avid cribbage player. He was a member of the Senior Center’s singing group, the Do Re Mi’s, until his death, singing with them as recently as April 18th, 2013.
He is survived by a son, Dr. Stephen C. Strebel and his wife, Mary, of Westfield; a daughter, Sandra Strebel Peavey and her husband, Bernard, of Hingham, MA; five grandchildren, Maggy Pietropaolo and her husband, Vincent, of Lincoln, MA, William Strebel and his wife, Margaret, of West Hartford, CT, Stephanie Jasmin and her husband, Carl, of Longmeadow, MA, Sarah Cameron and her husband, Roger, of East Longmeadow, MA, Dr. Joseph Strebel and his wife, Heather LaPorte, of Longmeadow, MA; 15 great-grandchildren: Zackery, Sofia, Leila, Brendan, Aidan, Declan, Ryan, Sam, Ben, Nathan, Grace, Owen, Ruby, Izabella and Sawyer.
The family requests that in lieu of flowers, donations be made to the Westfield Senior Center. Arrangements will be private.
firtionadams.com