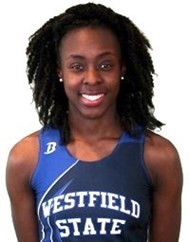 WESTFIELD – Westfield State University senior sprinter Targie Gervais (Springfield) and sophomore shot putter Naloti Palma (Westborough) will be competing in the NCAA Division III women’s indoor track and field championships on March 14-15.
Nebraska Wesleyan is hosting the national championships at the University of Nebraska’s Devaney Center.
Gervais is making her third trip to the national championships. The two-time All-American placed second in a photo finish at last year’s indoor national championships with a school record time of 7.61 in the 60 meter dash. During her freshman season she earned All-America honors by placing seventh in the 100 meter dash at the NCAA outdoor championships.
Despite being set back by injuries this season, Gervais is ranked 13th in the 17-athlete field with a time of 7.78. Palma is ranked 16th in the competitive shot put field with a school record toss of 13.62 meters (44-8 ¼). Palma is making her second NCAA national championship appearance. During the outdoor season last year she placed 11th in the shot put. Palma also holds the school record in the outdoor shot put with a heave of 45-6 ¼.
The 60 meter dash preliminaries are scheduled for Friday, March 14 at 3:30 p.m. (Central Standard Time), with the finals slated for Saturday at 3:25 p.m. All 17 shot putters will be competing in the finals on Saturday at 10:00 a.m.