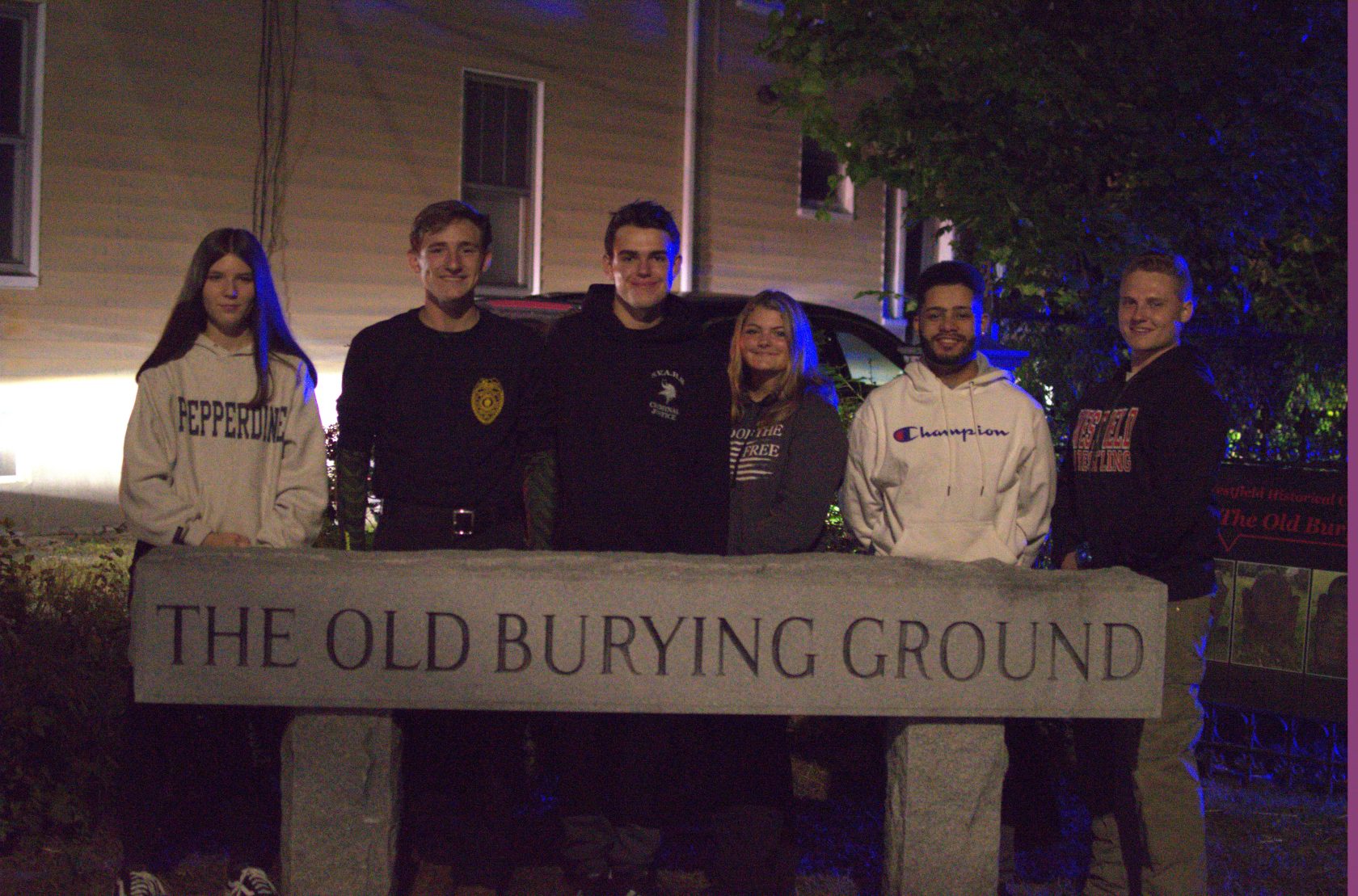 WESTFIELD — Historical Commission Chair Cindy Gaylord said that this weekend’s Ghost Tours at the Old Burying Ground was one of the most successful in the history of the annual event. 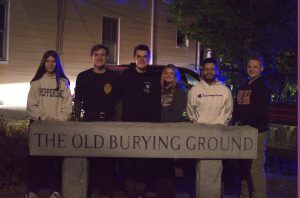 From left: Police Youth Cadets Heaven Timmerman, James Coach, Dylan Arruda, Natalie Laiselle, Miguel Vazquez, and Michael Durkee were among those who stayed overnight at the Old Burying Ground both as a group exercise and to act as a deterrent against theft of equipment left in the cemetery overnight. (PETER CURRIER/THE WESTFIELD NEWS)

Dozens of people at a time gathered for a one-hour tour of the historical cemetery and its most notable gravestones. Local volunteers played the roles of Westfield’s most significant historical figures, often standing next to the figure’s gravestone. Among the portrayers were state Rep. Kelly Pease in the role of John Moseley, state Sen. John Velis as Ezra Clapp, and Art Sousa as the Rev. Edward Taylor.

Gaylord said that tickets for the tours were not only sold out, they were oversold, leading to larger crowds for each individual tour. As of Monday morning, Gaylord said a final count had not been taken for how much money was raised. Proceeds will go into the maintenance and promotion of the Old Burying Ground and its historic gravestones.

Gaylord said she was grateful for all of the volunteers and the Historical Commission for making the tours happen after a year off due to the pandemic.

“It takes so many people to pull this off. Everybody so freely gave their time and energy to make this happen,” said Gaylord.

Following the final tours on Friday and Saturday night, a group of about 10 Police Youth Cadets stayed overnight in the Old Burying Ground with two police officers as a sort of security measure. Following the most recent tours in 2019, somebody broke into the Old Burying Ground overnight and stole lighting equipment belonging to Jay Pagliuca of Westfield on Weekends, who donates his time and equipment for the special effects of the tours each year.

Gaylord said that the overnight stay by the cadets was a success, as there were no incidents to be reported or attempts to steal any equipment. The cadets said that they stayed awake all night grilling burgers and playing cards inside the burying ground, which surrounded by houses on Mechanic Street.

Some of the money raised from the tours will be used to repair the wrought iron gate at the entrance of the Old Burying Ground, which is in need of repainting, and for some of the spikes of the gate to be bent back into place.