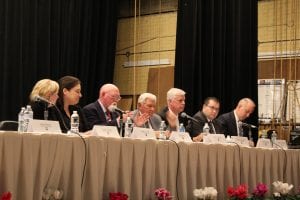 WESTFIELD – While the candidates for Westfield’s at-large city council seats discussed their priorities and goals, they also highlighted some issues concerning behavior with the current council on Wednesday night.

“It has been an embarrassment watching the council lately. Calling residents who speak at your public hearings a parade is revolting and sending emails while you are doing council business at the table is wrong,” said candidate Kristen Mello to applause from the audience. Throughout the event, Mello also discussed that fixing the water contamination in Westfield is her priority and the main reason she is running for a council seat.

In his closing statement, Councilor Matt Emmershy voiced his displeasure against the negativity and lack of professionalism on the council while also addressing one of his priorities, which is fighting against Westfield hitting the tax levy in the next several years. “People wonder why their taxes are going up — 17.1 percent in three years is what the city payroll has increased. There’s your answer, we need to reign that in,” he said. 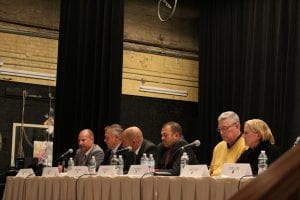 Councilor Dave Flaherty included various graphs regarding Westfield’s economic situation, including a graph showing the city’s tax levy and growth. In his closing statement he cast his doubt on some of the other candidates’ promises because of the tax levy. He said, “It is impossible to do some of the things we’re promising people. We promised employees benefits that we have no way to pay. It’s mathematically impossible.”

Andrew Surprise, the current ward three councilor said one of his priorities is finding a solution to Westfield’s water contamination problem.

“I’ve traveled to Boston and Washington D.C. to advocate on your behalf for help to clean up our water issue. I’ve researched the water issue and talking to scientists to see if carbon filtration will work for our community. Short answer, it won’t,” he said.
James Adams discussed his intentions to support public safety and education.

“Education, police and fire departments, I’ve spent thousands of dollars out of my own pocket supporting those three things. I will continue to do everything I can to keep us safe,” he said.

While some of the candidates discussed their thoughts on specific issues during their opening and closing statements, others discussed their experience and what being a city councilor means to them.

Councilor Brent B. Bean II focused on the future during his opening statement and discussed what he wants to see Westfield become. “Westfield’s been everything to me,” he said before discussing the retirement of two commissioners who spent 30 years working for the city. He added, “I want to help keep their dedication going in the city of Westfield.”

Cindy C. Harris, currently the only woman who has an at-large city seat, discussed her experience as one of the greatest assets for her campaign to be reelected. She said, “As a human resources expert, I understand jobs, pay and what is necessary to run a good business, which is the city.”

Dan Moriarty, one of the new candidates challenging for a spot on the council discussed his philosophy when it comes to being in office. “It’s more than having an agenda, it’s about having priorities. And listening and investigating what’s going on to make decisions that are in the best interests of the city,” he said.

Former Mayor Richard K. Sullivan Jr. discussed a litany of accomplishments as mayor during his opening statement to set up his platform for the night. “Over the course of my career I think I’ve built a track record for investments in the future of Westfield. Especially in the issues that affect our quality of life in Westfield,” he said.

Former Councilor Matthew Van Heynigen discussed his experience serving Westfield in the past and how important the city is to him.

“I bring experience, skills, commitment and professionalism the position of councilor demands and the residents deserve. I am a stake holder in every sense of the word, I’m committed to my hometown and its future,” he said.

Rudy Musterait discussed that bringing fresh faces to the council only stands to benefit the Westfield Community. “I believe I can bring fresh new perspective to the council as well as new ideas in a respectful manner,” he said. He added that he thought there was a lack of respect between members on the current council over the past several years.

Incumbent Councilor Dan Allie discussed his thoughts to bring the community together to protect Westfield’s future and his desire to work with the community. He said, “As your city councilor, I listen to your concerns and work to be an independent voice on the council. We share the same future in this community, we need to work together to make Westfield a great place to live.”

The Oct. 30 forum wrapped up a string of events that brought the candidates for each of the different positions out to the public before the Nov. 5 election.