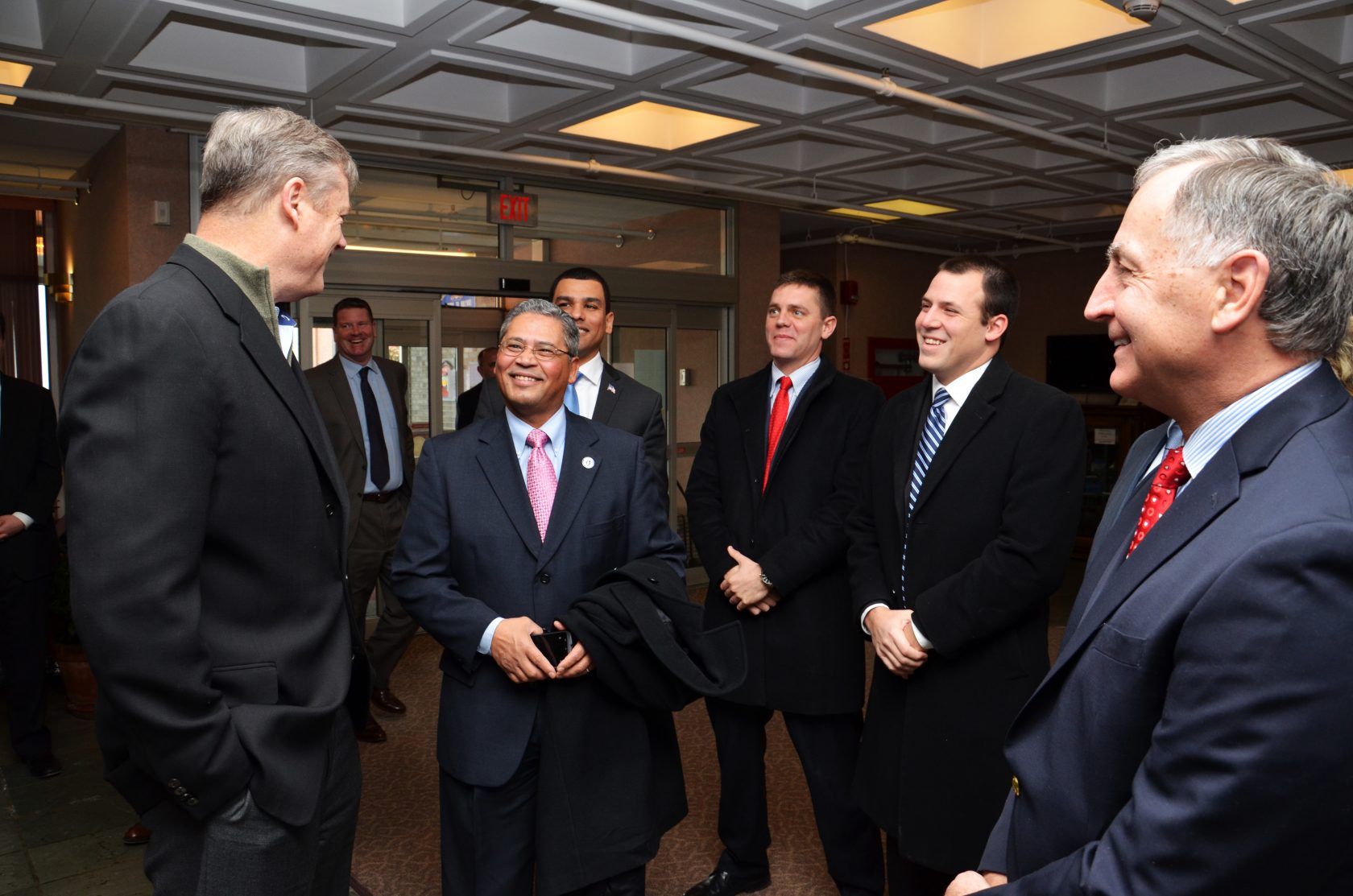 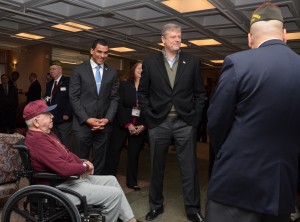 HOLYOKE – Gov. Charlie Baker toured the Holyoke Soldiers’ Home on Monday, his first visit to the facility since he took office in January 2015.
State Sen. Donald Humason and State Rep. John Velis joined Baker and members of the western Mass. State House delegation.
Baker proposed a modest, $1 million increase in the Fiscal Year 2017 state budget for the Holyoke and Chelsea soldiers’ homes. The governor was scheduled to meet with the home’s board of directors, and state and local officials.
In the past few months, the Soldiers’ Home underwent an upheaval in top leadership with the resignations of Superintendent Paul Barabani, Deputy Superintendent John Paradis and Board Chairman Steven Como.
The state appointed former Chelsea Soldiers’ Home Superintendent Cheryl L. Poppe as the home’s acting superintendent. An announcement is forthcoming on a new chief financial officer, a position gone unfilled for years.
The visit stemmed from a recent State House meeting between Baker and the western Mass. delegation. Velis told Baker that residents asked if and when he would visit the home.
The delegation, led by State Rep. Aaron Vega of Holyoke and Humason, greeted Baker just before noon on Monday.
Representatives from local veterans groups were present along with Chicopee Mayor Richard Kos.
Baker said the Soldiers’ Home has served area veterans for generations, including current residents who participated in the D-Day landings of WWII.
“We look forward to working with the trustees and the management team to continue to make sure it fulfills its mission,” he said.
Baker said he came across a number of residents who served in the Navy and Air Force.
“There’re folks here from 68-98, which is just amazing,” said Baker.
He said the home’s mission is to provide a “wonderful quality of life and quality of care” to western Mass. veterans.
Baker addressed if the funding increase would address nurse staffing issues in Holyoke. Baker said a recent survey indicated that quality of care, staff nursing and other activities “performed extremely well.”
While the Chelsea facility may receive between $4-5 million more in state funding, Baker said the facilities differ in services provided to resident and non-resident patients.
“Chelsea serves more people but at the same time doesn’t have a skilled nursing facility,” he said. “The staffing levels are different at Chelsea. This place (Holyoke) has a reimbursable operation and Chelsea isn’t reimbursable.”
Baker said the Chelsea Soldiers Home operates a costly power plant. Holyoke taps into a steady feed of cheap, renewable energy supplied by the Holyoke Gas and Electric.
Baker called for a closer examination of caring strategies for Massachusetts veterans, and to conduct a market analysis.
“It’s not just a big issue with the vets community – the aging of the population is going to be an issue we’re going to face in many, many different ways,” he said.
While pleased with the Baker’s visit, Velis said, “The point that needs to be reiterated is that we need you (Baker) to be out here. If anybody deserves that, it’s the veterans from western Mass. and beyond.”
Velis said the home should be treated as a “sacred” place, with special attention paid to care, staffing and funding.
“I’m happy the Governor is here. “Late is better than never,” he said.
He plans to meet in the coming weeks with members of the House Ways and Means Committee about the Soldiers’ Home funding and veterans issues.
Velis and Humason sit on the Joint Committee on Veterans and Federal Affairs. The House and Senate must draft and submit budgets for FY 2017.
Humason said he appreciated that Baker kept his promise to visit the Soldiers’ Home.
“This is sooner than we expected and we’re happy he’s here,” he said. “I hope he takes some time today to get to know the staff and residents at the Soldiers’ Home.”
Humason said the Legislature continually strives to increase funding for the Chelsea and Holyoke soldiers’ homes. “Obviously, the more staffing we provide here at the home, the more patients we can have, the more residents who can be here,” said Humason.
He added the struggle continues to raise nurse staffing levels and available beds in Holyoke.
“The Governor is sensitive to that and he’s also looking at the long term about what the mission and the future is,” said Humason.
In a small ceremony, Baker swore in Michael F. Case as the Soldiers’ Home’s new board chairman.