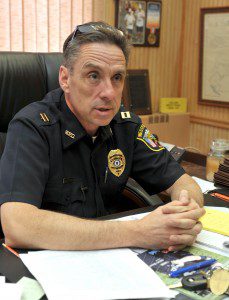 WESTFIELD – Efforts by city police to curtail consumption of alcohol by those younger than the legal drinking age will be boosted by a $10,000 grant to police, presuming the City Council accepts the grant, to be presented at an upcoming meeting.
Westfield Police Capt. Michael McCabe reports that $203,000 was made available by the National Highway Traffic Safety Administration and the Officer of Juvenile Justice and Delinquency Prevention of the U.S.Department of Justice to the commonwealth. The funds have been distributed to 25 police departments across the state by the Highway Safety Division of the Massachusetts Executive Office of Public Safety and Security.
McCabe said that the city’s $10,000 slice of the pie “provides much needed funding to target the problem of underage drinking.”
“Whether you are underage, plan to sell (alcohol) to a minor, or buy alcohol for a minor, this funding will aid us as we work diligently to enforce the law” he said.
McCabe said that the grant will fund a variety of police activities during the year, which will include compliance checks in local bars, restaurant and retail stores, as well plain clothes officers on duty (with the cooperation of the management) in liquor stores and bars, reverse stings and party patrols.
He said that police will work with other local agencies such as Westfield State University, Westfield District Court, and the city’s License Commission to analyze the extent of the issue locally and crack down both on minors attempting to circumvent the law and those persons and businesses which enable them.
“Teens and parents need to be reminded that underage drinking is not a game. It’s deadly serious,” McCabe said.
“Parents and anyone else supplying alcohol to those under 21 should also know they’ll face legal liabilities,” he said.
McCabe pointed out that traffic crashes are preventable and said that the grant will help the city police reduce the number of deaths and injuries due to vehicular accidents.
McCabe cited federal statistics which show that, in 2010, more than half of the 15-20 year-old youths killed in motor vehicle crashes were found to have blood alcohol levels greater that the legal limit for vehicular operators.
McCabe said that he hopes that the grant will be accepted by city officials, and thus available to be expended, in time to support police efforts to control underage drinking during “spring weekend” at WSU and other parties which generally occur as the weather gets warmer and the academic year draws to a close.