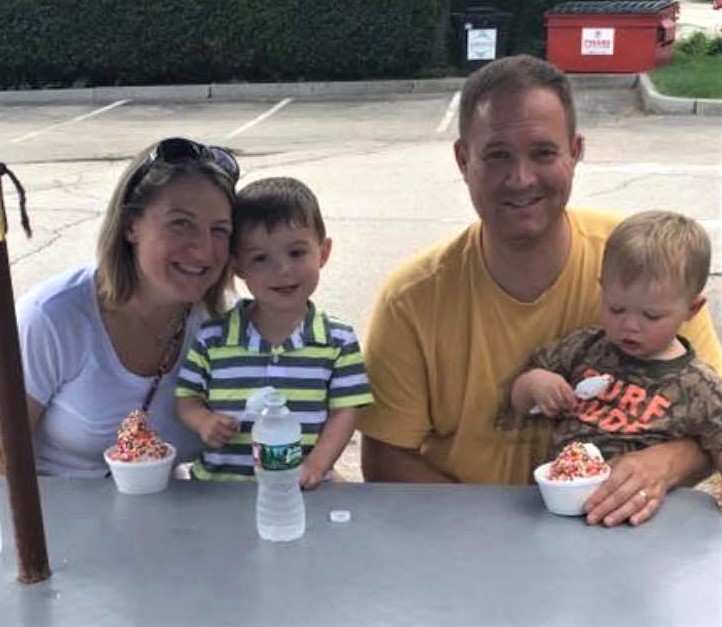 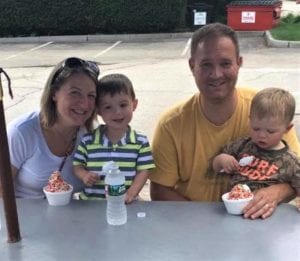 Colson’s great grandfather Charles Nutter started the business known for its milk, ice-cream and especially for its fudgesicles.

When the Dairy closed its Feeding Hills Road doors in 2004, Colson had a dream to bring back the chocolatey treat that was a mainstay not only for him, but for people across the region.

Now, Colson, a construction estimator full-time, is ready to bring them back and is seeking donations through a Kickstarter fund to help him get started.

“I really started to pursue it about five years ago right after my oldest turned one,” Colson said. “Per the pediatrician, that’s when toddlers can start eating chocolate. The little guy took to chocolate milk like bees to honey. I remember thinking ‘I have got to make this guy a fudgesicle somehow, he’s going to love it’.”

Colson began trying to recreate the original recipe in his Agawam home. He said it took four or five tries to get it just right, even with his family’s treasured recipe.

“The trick was hunting down the ingredients and proportionately scaling down the recipe and process for tiny tests batches,” he said.

Colson said it took some time to convince his father to give up the coveted recipe. 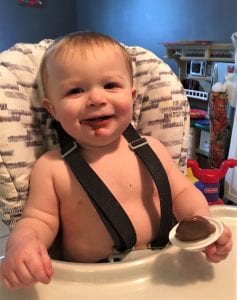 “It probably would have been easier to get struck by lightning while playing hopscotch with Bigfoot than it was to get my Dad to share the trade secret with me,” he joked. “After two-plus years of asking (aka begging) on a very regular basis, he finally agreed to share it with me, with the condition that I swear to secrecy and agree to guard it with my life. “
Colson’s goal is to raise $30,000 via Kickstarter.com (search under Pioneer Dairy Fudgesicle).

“I know that it’s a pretty high number but, to do this right it’s going to take the right equipment, and unfortunately it is not cheap,” he said. “The big ticket items needed are a popsicle machine, freezer, small homogenizer, heating and cooling tanks, package equipment, and other pertinent items and fees associated with this type of business.”

Colson said he has “a million memories of Pioneer Dairy and the friends and family that worked there.”

“It was my number one destination since I learned to cross the street.” He said. “I was very fortunate to grow up with it and to have had the opportunity to work there from a young age. Also, as a kid, the perks of having an ice cream factory in the family were enough to make Willy Wonka jealous, but I am hands down most thankful for the lessons learned from everyone involved along the way.”

Colson recalled being young enough to just barely open the freezer. He said he could back up to the milk cooler and take a leap to the edge of the freezer.

“From there I could hang over the side, balance at the waist and reeeeaaaccchhh down into the bottom of the cooler to retrieve fudgesicles for me and my brother,” he said. “A whole lot of effort, but in the end totally worth it. I guess that’s what I am doing again now — taking a leap and reaching towards the goal of fudgesicles, however it’s in a way taller freezer, and I need a boost to get there so i can bring it back for everyone again.”

Colson said he is in the very early stages of making the fudgesicle business a reality. He hopes the Kickstarter fund will help “open doors” for him as far as where and when he can begin producing Southwick’s famous fudgesicles.
Colson has contacted the Massachusetts Small Business Development Center about renting a commercial kitchen.

“I will most likely get things started there or somewhere similar that’s closer to home. A long-range goal/dream would be to eventually bring the operation back to the original property, get my dad and uncle back into it and rebuild,” he said.
Colson said legend has it that in Nutter’s early years in business, he “used to let a couple of ‘Friendly’ brothers use the ice cream equipment at night, as long as they put it back the way they found it. I’m not sure if the legend is true, or if that’s even possible in today’s business world, but if one of the local small dairy production plants and/or ice cream makers, with the right equipment, would let me moonlight at their facility that would be a tremendous leg up.”

Colson said he has had a lot of positive response so far.

“I want to relay my thanks and appreciation to all those that have commented, liked and shared my announcement on Facebook and have made a contribution toward the Kickstarter campaign,” he said. “I love reading their stories and positive comments — it’s incredibly motivating. Please continue to spread the word and I will continue to do everything in my power to get this venture going, one way or another, in time for summer.”