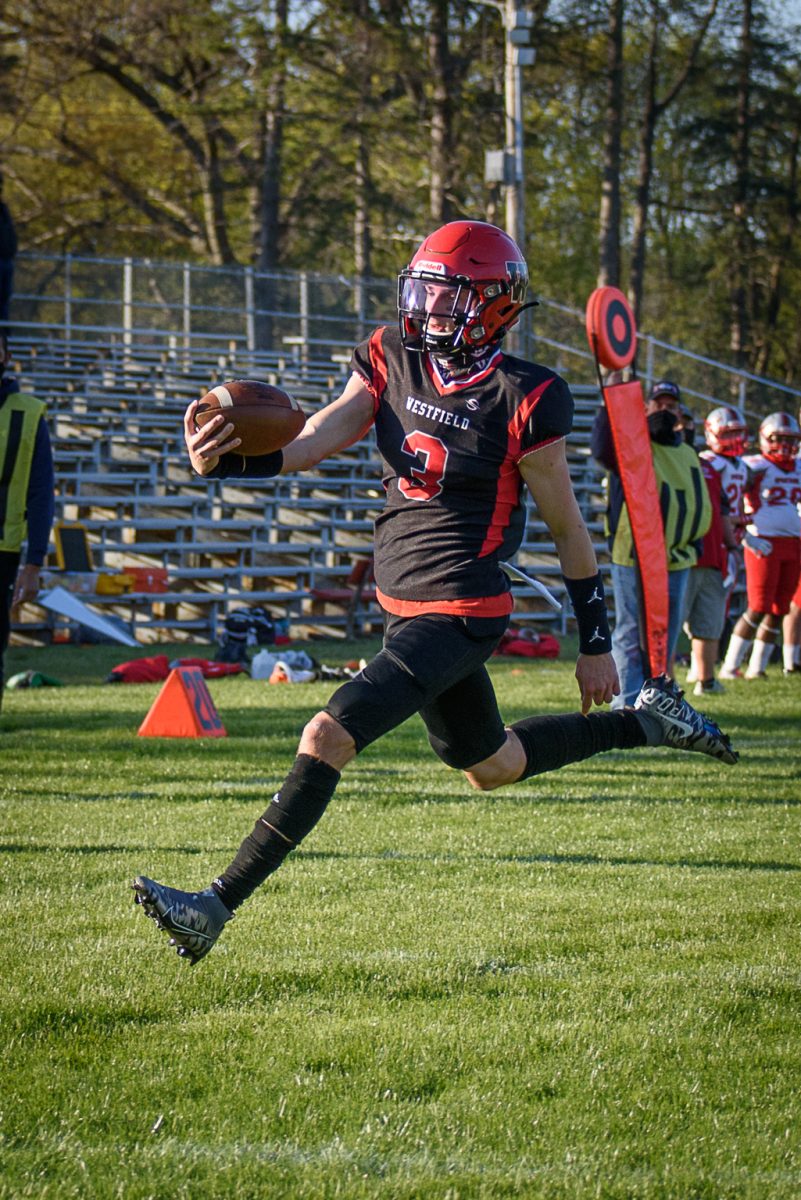 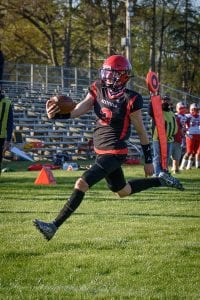 WESTFIELD – Playing without a single quarterback remaining on their roster, the Westfield High School football team’s final game of the 2021 “Fall II” season could have turned into a horror movie. Thanks to junior wide receiver Andrew Scott, it was a fairy tale ending.
With Westfield’s starting and backup quarterbacks both sidelined for Friday night’s senior sendoff, the team’s emergency QB received his first career start and delivered. Scott rushed for two touchdowns and led the Bombers to a convincing 30-6 win over East Longmeadow Friday night at Bullens Field.
“I was pretty nervous going out there but I just got in a rhythm,” Scott said. “We rallied around each other. We played our hearts out. We played with passion. We played with conviction. We just played Westfield football. …We needed one for the seniors and hadn’t won in a while so it felt really good to get one.”
After finally setting into the quarterback position, Scott jitterbugged his way to a 29-yard touchdown with 4:17 remaining in the first quarter. Westfield’s defense put their team in favorable position, forcing a botched punt and allowing the Bombers to begin their scoring drive at the East Longmeadow 30.
Westfield capitalized on its second possession of the second quarter. The Bombers began the drive near midfield, chewed up some yardage on the ground with solid runs from running back Ryan Cimini, and capped it all off with a 21-yard scamper from Scott for a 12-0 lead.
While Scott continued to stun the opposition, Westfield’s defense locked down East Longmeadow’s offense. The Bombers sacked the Spartans on two consecutive plays on the next possession, and deflected a punt.
Set up deep in East Longmeadow territory, Westfield once again took advantage. Cimini took a handoff from Scott, drove into a wall of defensive linemen, kept his feet churning, bounced outside, turned upfield and dove into the end zone for a hard-earned eight-yard TD run. The Bombers led 20-0 after Scott connected with Joseph Delgado for a 2-point pass.
Westfield’s defensive intensity remained at a high level. Bombers’ defensive back Matt Collins intercepted the ball, setting the Bombers up in the red zone. The series ultimately ended in a 32-yard field goal from Hunter Cain to make the score 23-0 just before the half.
If East Longmeadow was seeking a second-half comeback, Westfield extinguished those thoughts immediately.
Because Westfield deferred the kickoff in the first half, the Bombers took possession from the outset to begin the third quarter. On the quarter’s second play from the line of scrimmage, running back Nick Bates rumbled 55 yards for a touchdown. After Cain kicked the extra point through the uprights, the lead blossomed to 30-0.
East Longmeadow’s lone touchdown came on a short pass play late in the game. Westfield linebacker Jeremiah Masso, Jr., blocked the extra point.
“To have the team go into the week with some real adversity, our starting quarterback – – arguably our most talented player – – not playing,” coach Parent said, “the team rallied around that. I think that was a sign of growth in the team.”
“The effort was there on every snap,” Parent continued. “That’s something we didn’t see on a consistent basis throughout the year. We’d see it for a few plays at a time and then we’d kind of have a mental lapse and things would kind of go downhill. That didn’t happen for us tonight. We stayed committed, we stayed through it and we finally finished.”
It was made even more magical in the fact that the team’s wide receiver turned quarterback was part of it all.
“Give credit to Scott for stepping up in some big shoes and playing a really competitive game,” coach Parent explained. “He didn’t throw it great, but he competed. He ran well; he ran the offense well. The guys rallied around him. He rallied around the guys. That was the most important thing to see tonight. Regardless of the outcome and the score, to see how the kids responded to the adversity was the most important thing we saw tonight.”
NOTES: In his post-game interview, the Bombers head coach showed his appreciation for the Westfield School Board, which gave the go-ahead to play football during the pandemic. “First and foremost, I want to thank the school committee,” Parent said. “I want to thank the town for letting us have the season. The kids were awarded the decision. We didn’t have any issues all year. We made it through the entire nine weeks with no issues. Step No. 1 was just completing the season. I’m super grateful that we were able to have this opportunity to finish the season.”
For eight seniors – – Chris Barber, Will Brewster, Hunter Cain, Joseph Delgado, Connor Fitzgerald, Jaiden Giza-Bilodeau, Jeremiah Masso, Jr., and Jorge Serrano – – the football season came to an official end.
“I’m super happy for the seniors here tonight that had a season kind of ripped away from them and then given back to them for them to be able to finish,” Parent said. “We only had eight of them and only six played tonight. All six guys contributed in really meaningful ways. That alone really brings the season together. It’s a great culminating factor in a COVID year.”