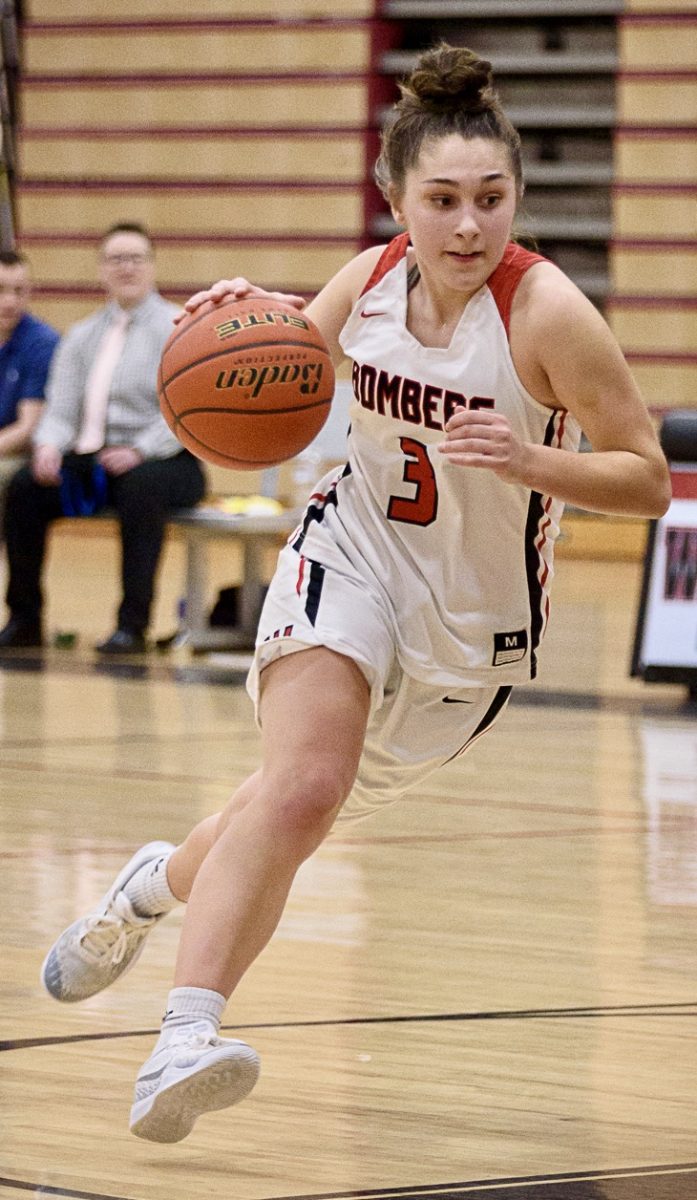 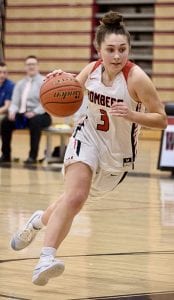 WESTFIELD – With the race for 1,000 firmly in her back pocket, Westfield senior guard Olivia Hadla and the Bombers girls basketball team are now not just chasing history, but a tournament berth.
Chicopee went on a 11-5 run to close out Friday’s contest and defeat Westfield 53-47. The Bombers, who fell to 8-7 overall, now need two wins in their final five games to qualify for the postseason.
“We are in playoff mode already,” Westfield girls basketball head coach Dylan Willey said. “We got to get two more wins to get in to breathe a little.”
There was very little breathing room against Chicopee. The two teams were tied 17-17 at the half, but the Pacers put together a strong third quarter to seize the lead. Westfield’s Emma Pedolzky made a key 3-pointer in the waning seconds of the quarter to give the Bombers’ life.
In the fourth, Hadla exploded for 12 points. She finished with 24 points for the second straight night, duplicating her effort put forth in a winning effort against Sabis on Thursday.
Westfield’s Chandler Pedolzky had 14 points, 10 of which came in the second half Friday. Despite the strong surge though, the Bombers were unable to contain the Pacers down the stretch.
Chicopee pulled away from a 42-all tie, scoring 11 of the game’s final 16 points.
“They have so many scoring options,” coach Willey said. “We knew at some points they’d figure it out and go on a run.”
Sophomore forward Yami Matos led Chicopee with 16 points. Westfield junior forward Ali Piper came off the bench to provide a spark, hauling down several rebounds and providing solid defense.
Westfield next travels to Palmer to take on the Panthers Tues., Feb. 4 at 7 p.m.

Thurs., Jan. 30
SKIING – PVIAC RACE RESULTS
Saints rise again
The Saint Mary’s High School boys ski team won again Thursday night at Berkshire East in Charlemont in both the division and the overall standings, solidifying their spot as one of the best teams in the league. The Saints placed two skiers in the top five overall and four in the top 10 in the division.
Less than a second separated the overall top five and Jack Masciadrelli was the fastest man on the mountain again (24.66).
“He’s really skiing strong this season and having fun,” St. Mary’s High School ski coach Andy Lussier said. “‘Shake & Bake’ was in effect again tonight. It was a technical set for the GS tonight and Jack and Hayden really attacked it.”
Hayden Lussier finished fifth overall and third in the division (25.51). Manny Umana (16th overall, 7th division) Kimura and Colin Freeman (21st overall, 10th division) put down solid runs to round out the team finish.
“They are continuing to ski well and they both feel there is more in the tank for themselves,” coach Lussier said. “They are working hard and we’re looking to have things come together for them for the state meet in a few weeks.”
Aiden Mapel led Southwick with a 17th place finish (26.81). Billy Fouche paced Westfield (30th overall).
The St. Mary’s girls ski team had another great night, finishing third in the division again.
Junior Chloe Lussier (4th overall, 2nd division) led the way for St. Mary’s. Saints’ Elianna Umana Kimura (16th overall, 6th division) and Mara Downie (13th division) followed.
“The Lady Saints are starting to show some consistency in the team results,” coach Lussier said. “Chloe is showing confidence in her skiing after her injury last season and it’s hitting at the right time before states. It was good to see her getting back to where she was before her injury. This was a great finish for her tonight.”
Westfield’s Emma Renaudette finished 14th overall (43.65). Southwick’s Grace Brockbank placed 39th (55.87).

Soltys’ 28 leads Indians past Rams
Ware 66, Southwick 42
Ware’s John Soltys scored a game-high 28 points to upend Southwick (2-12). Andrew Soltys had 15 for the Indians, and Keith Smith chipped in 11.
Josh Lis led Southwick with 15 points. Rams’ Ryan Molta had 12. Molta and Lis made all their baskets on 3-pointers.