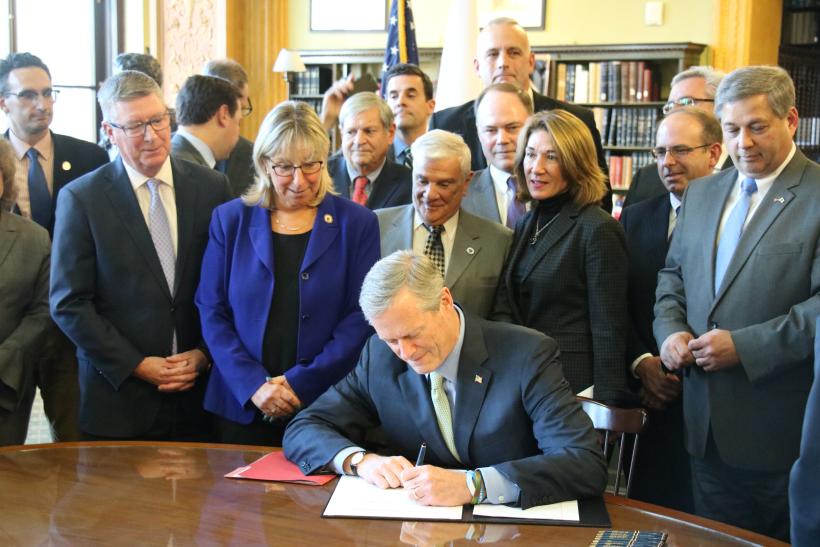 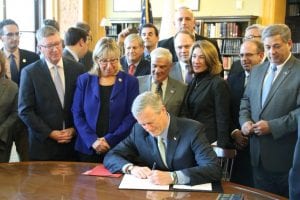 Gov. Charlie Baker Nov. 25 signs legislation banning the use of electronic devices that are not hands-free while driving. (State House News Photo)

BOSTON – Driving while using electronic devices that are not hands-free will soon be against Massachusetts law.

Gov. Charlie Baker Nov. 25 signed the legislation, which takes effect in 90 days. The law also sets forth penalties for violating the law and requires that law enforcement officers report data on violations so the information can be shared with the public.

“It’s not often that we in the Legislature can say we passed a law that will unequivocally save people’s lives,” Velis said. “This bill does just that.”

Velis said these deaths could be avoided.

“Distracted driving kills people on a daily basis and is, in my opinion, the most avoidable tragedy you can have,” he said. “There is no phone call, text message, email, or social media post that is worth hurting yourself or others over. A very clear message was sent today; when you’re driving, keep your eyes on the road and nothing else. “

Velis called it “a great day for public safety in Massachusetts.”

“As a victim of a distracted driver who was using his phone’s GPS and ran right into the rear of my truck while I was stopped on the MassPike on my way to work, I am pleased it is finally a law and hopeful it will give police the teeth they need to enforce it,” said Humason. “Luckily only my knees were injured in the accident. Far too many motorists have been badly injured or even killed. My hope is that this law will remind drivers that their number one job on the roads is to drive safely. The devices can wait.”

Baker acknowledged the work of stakeholders for efforts to get hands-free legislation passed and thanked the families of victims for sharing their personal stories during legislative hearings.

“Our Administration is committed to keeping the Commonwealth’s network of roads safe, and this legislation will substantially reduce distracted driving and hold operators accountable when they are looking at an electronic device instead of looking at the road ahead,” said Baker in a press release. “We are especially grateful for the many advocates and families that passionately fought to bring this bill to fruition, are thankful for the Legislature’s collaboration on this bill and look forward to continued efforts to improve road safety in Massachusetts.”

The release further states that Polito said there is a “shared obligation” among communities to keep roads safe.

“This commonsense legislation makes clear that in order to operate a vehicle safely, individuals must put safe driving first – ahead of reading emails or texting a friend,” she said.

Under the new law, titled An Act requiring the hands-free use of mobile telephones while driving, operators of motor vehicles and bicycles cannot use an electronic device unless the device is being used in hands-free mode. Operators cannot read or view text or look at images or video, unless what is being viewed on the device is helping with navigation and the device is mounted in an appropriate location. They also cannot make phone calls unless they are able to do so without holding the phone, utilizing technology such as Bluetooth.

Electronic devices can be use in response to an emergency and allows use if operators are stationary and outside of active travel lanes.

State Rep. Joseph Wagner, D-Chicopee, who first filed a hands-free bill in 2003 and served on the conference committee this session, said the law’s success was an “emotional moment,” according to State House News’ Chris Lisinski.

“I, along with my colleagues and various administrations, have put our fingerprints on a lot of important pieces of public policy that have impacted lives,” Wagner said to State House News. “But there is none in my 28-plus years that measures up to the law enacted here today and signed by the governor.”

The hands-free law takes effect 90 days after passage and has reporting requirements for law enforcement officers who make traffic stops. They must make note of data, including the age, race and gender of individuals issued a warning or citation. The Registry of Motor Vehicles will house the data and the Secretary of Public Safety’s office will annually release the information to the public. According to Baker’s office, the new law sets forth a process in the event there are suspicions a law enforcement entity may be engaging in racial profiling.