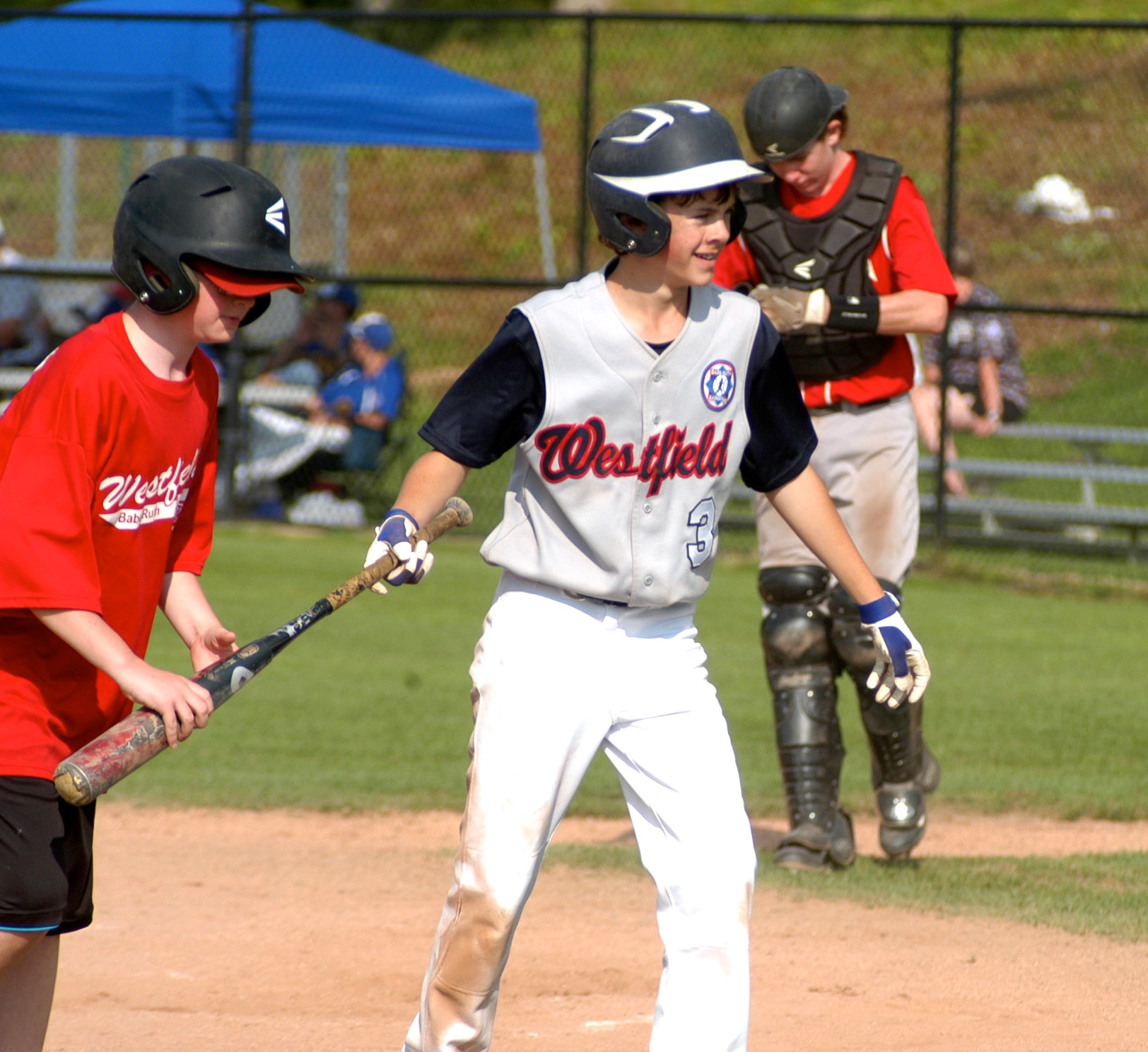 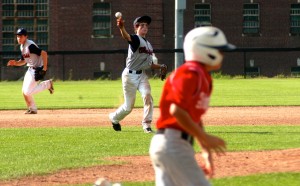 NEWTOWN, CONN. – The Westfield Babe Ruth Baseball 13-Year-Old All-Stars took their competition by storm in Game 2 of the eastern regionals tournament, schooling them in the art of hard knocks.
Westfield rallied for six runs in the seventh inning to overtake Arlington (Mass.) 10-8 Sunday to improve to 2-0 in the New England regionals tourney. The Whip City’s ballplayers made ESPN-type, highlight reel plays, and suffered some injuries in the process.
It was an inauspicious start for Westfield when starting pitcher Carter Cousins collided with first baseman Mike Nihill on a first-inning pop fly. Nihill held on to the ball, but Cousins was carted away by ambulance after suffering a blow to the head.
Players for Westfield pledged to honor their injured teammate by dedicating the game to him. Cousins should be proud.
Westfield took advantage of some well-placed hits, and some defensive ineptitude for Arlington to put together an early 4-1 lead. Arlington took advantage of reaching on a few errors of its own, and surged into a 4-4 tie in the third and a 6-4 lead in the fifth. 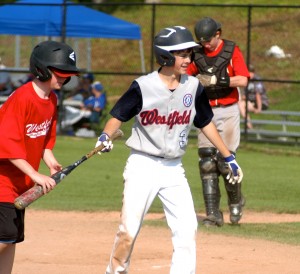 It was the seventh-inning rally that determined the final outcome.
Ryan Paro led off Westfield’s half of the seventh with a base hit. Jimmy Hagan walked, and Spencer Cloutier singled to load the bases. Ethan Dolan’s hard base running on the next play paid off as he reached on an error, pulling his team within one run of a tie, 6-5. Cam Parent tied the game 6-all with an RBI single to shallow right field. A balk put the Whip City back in front, 7-6. A two-run fielding error, and a wild pitch made it 10-6.
Hagan allowed a base hit and a bases-loaded single before retiring the side with a line drive out short, and two fly outs. Center fielder Bailey Collier was injured, making a diving catch to end the game, and preserve the victory. He walked away to a throng of cheers.
“Cousins is the heart and soul of this pitching staff, with Cloutier,” Westfield manager Mike Nihill said. “The kids were playing in a zone like they’ve never played before … running after things like I haven’t seen all summer long.”
“…It was all for Carter.”
Notes: Westfield was not only cheered on by several family members, friends, and fans, but also a collection of players from the Westfield Babe Ruth Baseball 14-Year-Olds, who were given the day off after their tournament game was rained out Sunday.

Saturday, July 26
Westfield 7, Waterford (Conn.) 3
NEWTOWN, CONN. – On a warm summer evening, Westfield began its quest for a New England regional championship with a decisive victory over the Connecticut State champion.
Once again, the dynamic duo of Spencer Cloutier and Jimmy Hagan kept the opposing bats silent, scattering a total of six hits over seven innings. Cloutier opened on the mound and went four innings. Hagan pitched the final three.
Westfield took the lead in the first inning, and never looked back.
Carter Cousins, Hagan and Ethan Dolan walked to load the bases. Cam Parent was hit by a pitch, resulting in the game’s first run.
In the second inning, Westfield loaded the bases again. Mike Nihill collected a base hit, Jack Blake was beaned, and Cousins walked, again. Hagan made it 2-0 with a long drive to center field.
In the fifth, Ethan Dolan drilled a base hit to center, Cam Parent singled, Joe Raco walked, and Bailey Collier unloaded a double down the left field line to score another run.
Westfield blew it open with four runs in the sixth.
Colton Baker led off the inning with solid base hit to right field. Cousins and Hagan followed with base hits. Cloutier drew an RBI walk. Cousins and Hagan scored on wild pitches, and Parent drove in the team’s seventh run of the game on a fielder’s choice.
Westfield had several defensive standouts, including three clutch catches by Mike Lurgio in left field, and a terrific play from Nihill, who ran down a loose ball in short right field, threw it to Cloutier, who, in turn, threw it to Parent for a tag out at third base.
Blake and Cam Davignone were solid behind the plate for Westfield.
Cousins reached base in all four at-bats with three walks and a single. – Jim Hagan contributed to this report