HARTFORD – Hartford Stage kicks off the new year with a brilliantly stylish production of Noel Coward’s 1930 comedy “Private Lives”, and it’s a feast for the ears and the eyes. Darko Tresnjak’s staging is simply suave. Alexander Dodge’s art deco sets dazzle (the first time in years that I’ve seen enthusiastic applause for a set change). Joshua Pearson’s costumes are tony and high hat. York Kennedy’s lighting designs bring out the colors of the sets, and J. Allen Suddeth’s remarkable fight choreography turns a bitch fight into ballet.
Simply put, “Private Lives” is a battle of the “exes”. Amanda and Elyot were fighting spouses, who have divorced and gone their own ways. They meet new partners, fall in love, marry for the second time and head to the South of France for a honeymoon. There’s one complication: they’re booked into adjacent honeymoon suites at their resort hotel. Their love is rekindled, and they run off together, only to resume bickering and arguing. Will they stay together? Return to their new spouses ? or..? 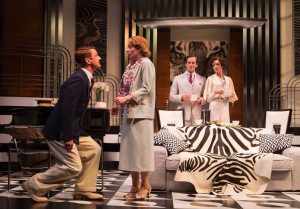 Noel Coward’s classic script shows the always bickering and fighting ex-spouses at the height of their “can’t live with each other / can’t live without each other” blend of tirades, flirtations, and reconnections. But, in the style of his contemporaries Cole Porter, Lorenz Hart, and Dorothy Parker, there’s a lot of innuendo, double entendres, and subtle moments in his very well-constructed script.
As theatre lore has it, Noel Coward was sidelined by the flu, while on a trip to Shanghai, and he wrote the play with the intention of starring in it opposite Gertrude Lawrence. It toured the British provinces in 1930, opened in London (with Laurence Olivier also in the cast) and became a major hit.
“Private Lives” was considered risque in its day, and the second act came under scrutiny by the Lord Chamberlain, who objected to a flirtation between two divorced people married to others. Coward pleaded his case, and “Private Lives” opened to acclaim. “Private Lives” has been frequently revived over the years. Elaine Stritch was directed by Charles Nelson Reilly in an Off-Broadway production. Tammy Grimes picked up a Tony Award for her rendering of “Amanda”. Elizabeth Taylor and Richard Burton, adept at marrying and divorcing and falling in love again, starred in a 1983 production.
The Hartford Stage performances are terrific. Rachel Pickup is a cool sophisticated yet hot-tempered “Amanda”. Ken Barnett cuts an elegant swath while behaving as a spoiled ex of Amanda. Jenni Barber and Henry Clarke play the roles of abondoned spouses beautifully, and Louise Montbertrand draws big laughs in her small moments onstage.
“Private Lives” holds up over the years as a debonair comedy of manners.. It’s often copied in film and television, but the original, as imagined by Hartford Stage’s Darko Tresnjak and company, is brisk, biting, and fun.
Hartford Stage presents “Private Lives” by Noel Coward. Directed by Darko Tresnjak. Scenic design by Alexander Dodge. Costume design by Joshua Pearson. Lighting design by York Kennedy. Sound design by Michael Miceli. Cast: Jenni Barber (Sybil Chase), Ken Barnett (Elyot Chase), Henry Clarke (Victor Prynne), Rachel Pickup (Amanda Prynne), Carine Monthbertrand (Louise). Through February 8. Hartford Stage. 50 Church Street, Hartford, CT. For tickets: 860-527-5151 or www.hartfordstage.org
Mark G. Auerbach studied theatre at American University and the Yale School of Drama. He’s worked for arts organizations and reported on theatre for newspapers and radio.