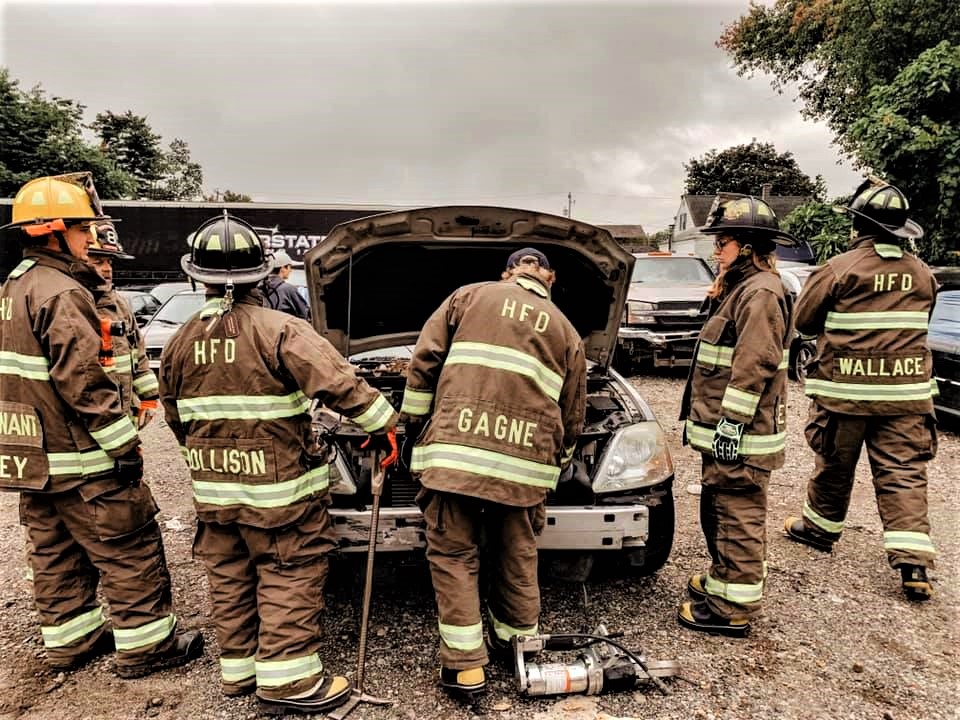 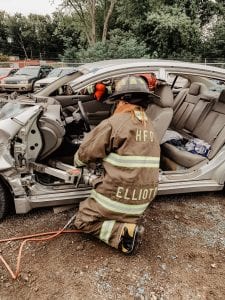 Huntington firefighter Paige Elliott with the Jaws of Life. (Photo by Brittany Dilley)

WESTFIELD – On Sept. 12, members of the Huntington Volunteer Fire Department went to the Interstate Towing yard in Westfield for some extraction training using the Jaws of Life.

Lt. Steve Graydon said that both Westfield and Southwick fire departments have used the yard for training on cars donated by Interstate Towing.  Graydon said some of the abandoned cars, which are scrapped after a period of time, are in pretty decent shape.

Eight Huntington firefighters attended the training, along with two juniors – up and coming firefighters who are still under 18. Graydon said they can observe, but do not have access to any of the tools.

Interstate Towing pulled a couple of cars out for the training. The Huntington department brought its new Fire Rescue truck, which has Jaws of Life equipment on it.

Graydon said there are two different tools; a cutter, which he said is like a big pair of scissors with a hook on the front, and a hydraulic jaw spreader, which can pop the doors right off. 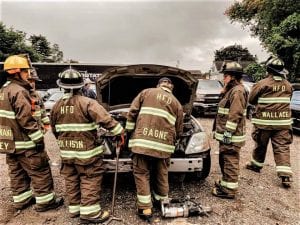 The first step is to cut off the batteries. The training included learning about how to do that with both regular and hybrid engines.

Then using the cutter, they cut the pillars between the windows, being careful to avoid airbags, which can explode.  After they cut all three pillars, they pull the roof right back.

Graydon said he has not used the Jaws of Life on a call, but also did the training last year. Afterwards, the department responded to a car that crashed into the Westfield River at Goss Hill Road Bridge. Graydon jumped in and held the driver’s head stable while the others used the Jaws of Life. He said the driver was fine afterwards.

“It’s a very important tool,” he said, and thanked Interstate Towing for donating the vehicles for the training.