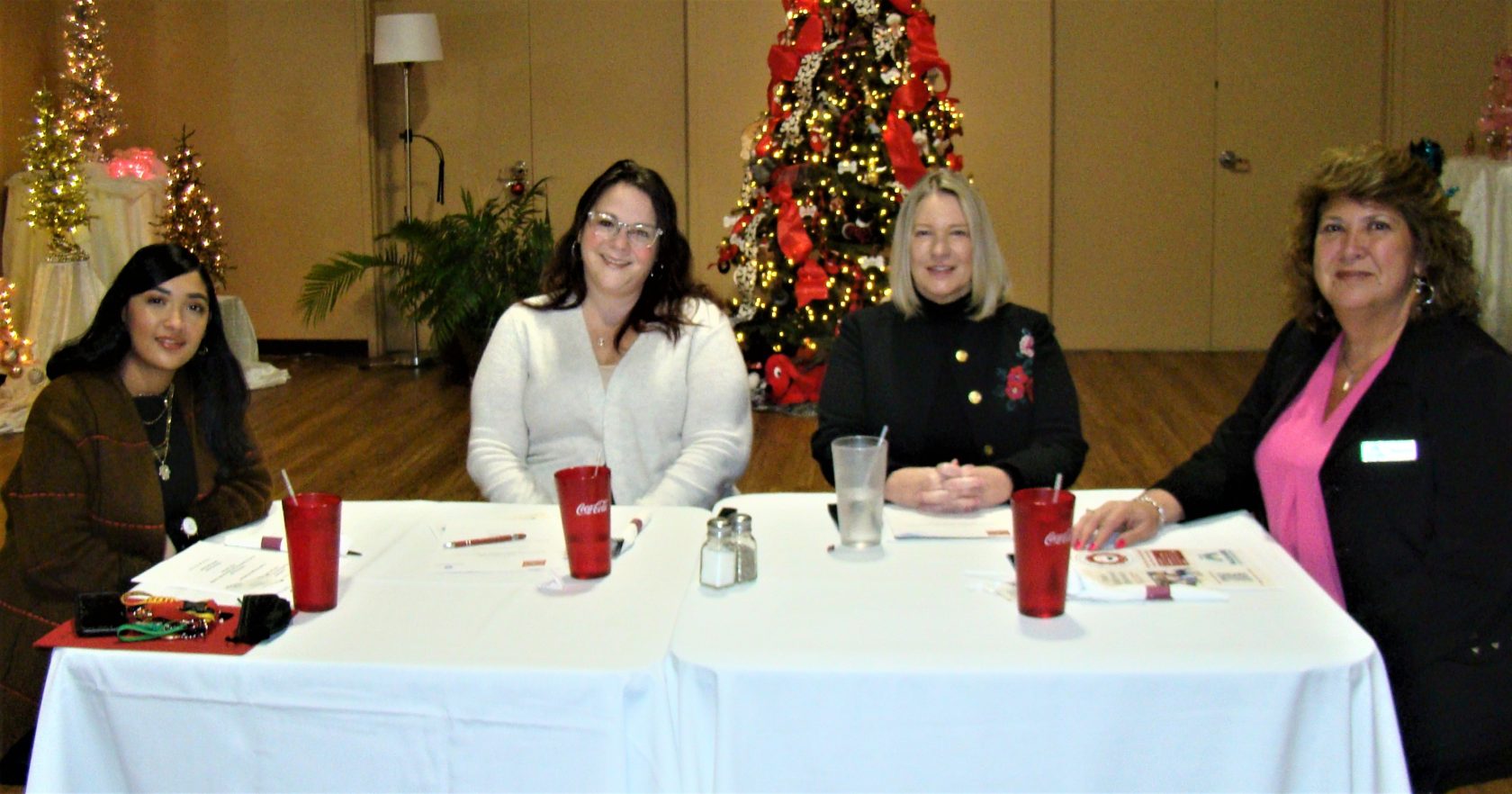 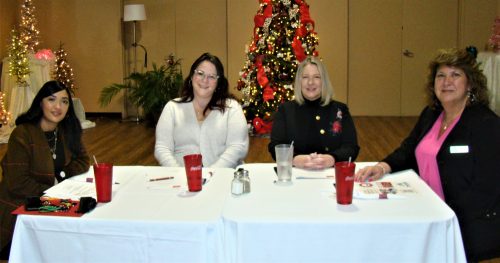 From left, Mishie Serrano of the Westfield High School, Jessica Roncarati-Howe of Dress for Success, Joanne Berwalk of Mestek and Ramona Rivera-Reno of MassHire were panelists at the Greater Westfield Chamber of Commerce luncheon on Nov. 30. (AMY PORTER/THE WESTFIELD NEWS)

WESTFIELD — A panel representing recovering addicts, disenfranchised women, teenagers seeking work and one local company seeking employees tackled the subject of making the most of available resources in a workshop sponsored by the Greater Westfield Chamber of Commerce at ShortStop Bar and Grill on Nov. 30.

Dawn Creighton, employment and training coordinator with MassHire Holyoke, served as emcee for the program, which she said came out of a legislative luncheon the Chamber held in October where the discussion spontaneously turned to difficulties in finding employees and filling positions.

On the panel were Ramona Rivera-Reno, executive director of the Reentry and Recovery Programs at MassHire in Holyoke; Jessica Roncarati-Howe, program director of Dress for Success; Mishie Serrano, coordinator of the Reed Career Center in Westfield High School; and Joanne Berwald, senior vice president of Human Resources at Mestek. Creighton said each of the panelists works with people to help equip them with the employment skills they need.

Rivera-Reno, who holds workshops on career re-entry in jails, recently received a national emergency grant on the opioid crisis, and will be launching a program in January on hiring people recovering from the crisis.

“We need to educate people in the community. Employers would save a lot of money if they understood what is going on,” Rivera-Reno said.

Creighton said she has been involved with the re-entry program for 15 years, and now with the recovery program.

“I really believe in the program,” she said.

She talked about recently having lunch with a friend in human resources, who said she couldn’t hire “those people.” Creighton said 50 percent of the workforce are “those people.” Soon after, she ran into the owner of that same company, who told her she wanted to be a part of their success stories.

Roncarati-Howe of Dress for Success talked about “Foot in the Door,” a program started by Creighton that just graduated its 10th cohort of women. The five-week training program teaches workforce readiness to disadvantaged women who may be single mothers, in poverty, and with backgrounds in trauma. The women graduate with a nationally recognized workforce readiness certification, a resume and set of references. She said the program offers a whole family approach to careers.

Berwald said Mestek has been 50 percent successful in hiring for jobs in Westfield in this environment. She said the company has had to increase its starting pay, give higher referral bonuses and attendance bonuses, adding that it have never had attendance problems before.

“We’re open to anybody. They don’t have to be trained — we’ll train you. We will pay for training and skills. We have upped all of that,” Berwald said.

Serrano said the Reed Career Center at Westfield High School helps students get work permits, with resume building and interview skills, and how to dress for a job interview, with access to the Community Closet in the school. She also reaches out to businesses who may need interns or volunteers.

“Our program is under construction coming out of the pandemic. We’re building from the ground up,” said Serrano, who joined as coordinator this year. She said students leave with cover letters, resumes and headshot photographs.

Serrano, who comes from YouthWorks, said she went through the program herself, and is now a coordinator of a program that’s all about careers and career readiness. Creighton asked if there is a particular industry students are interested in now. Serrano said nursing and medicine, and in hands-on trade jobs in industry. She said she is hoping to partner with Baystate Health for internships.

Rivera-Reno said hers is an on-the-job training program for people who have a foundation of skills. People in the recovery program go to a class for 60 hours before going into the workplace. She said has highly skilled people who have been out of work and in recovery for a few years, who are sometimes hard to place due to the stigma of substance abuse and their own feelings of being “less-than.” She said the program takes a holistic approach, helping them find self-confidence, self-awareness and self-esteem first.

“Engineers, not so much, they must have the skills,” she added. 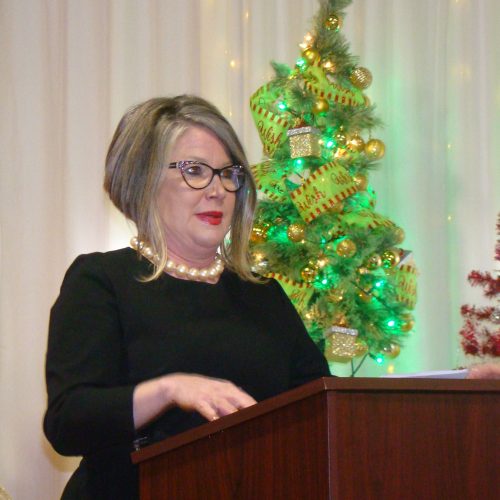 Creighton said the panelists had painted “a rosy picture,” and asked them what are the challenges.

“We need support and opportunities where women can come in and get training if they’re under-educated,” said Roncarati-Howe, adding that many of the women she works with are uncertain if they have the capacity to aim higher than working in fast food. She said they need opportunities that state very carefully, “we will train you if you put the effort in.”

She said the staggering statistics about the losses in the women’s workforce have a lot to do with the difficulty in finding child care.

“I know that’s not something a lot of companies can provide, but they might be able to offer flexibility to help women work and juggle life, child care, and caring for aging parents,” Roncarati-Howe said, adding that sometimes, that help “just looks like being able to shift their hours an hour or two one way or the other.”

She said she knows a woman with a toddler who recently relocated here due to domestic violence, and hasn’t been able to get a job because there she has no friends or relatives locally to watch her child.

“She gets hit with the stigma that people [like her] don’t want to work, they just want to get benefits,” Roncarati-Howe said.

Dress for Success got her three jobs to interview for, but she had to turn down two of them because she couldn’t get child care for the last hour of her proposed work shift. Roncarati-Howe said her group was able to partner with a childcare organization that could keep children in one room one hour longer for women who had to work until 5 p.m.

Rivera-Reno said being aware of the lack of transportation among new employees is another issue, especially in cities with limited bus schedules, such as West Springfield and Westfield. She said one company she worked with opened an Uber account for new employees until they were able to get a vehicle.

“Be creative when you’re doing hires. If employers are aware of resources that are available to help, they might be able to keep good employees,” she said.

Creighton suggested talking openly to employees about their challenges, and conducting exit interviews when they leave: “Have a conversation. Have HR share and be open with employees that resources are available,” she said.

“We don’t have youth babysitting and dog-sitting any more. Your youth are excited to work and to learn,” Serrano said. She said one key part in the decline in employees comes down to a lack of community. “Do you really know your coworkers?” she asked, saying that declining workforce participation rates aren’t a result of no one wanting to work, but a lack of communicating and communication. She said she is currently studying Latina studies in school, and hopes one day to start a community center in her hometown of Holyoke.

Berwald said everyone was making valid points, but speaking from an employer standpoint, her company has hired some wonderful people from programs like theirs, but is finding a gap in expectations between what the program graduates expect and what an employer needs, “such as, yes, you do have to work 40 hours, and yes, you must be on time.”

Rivera-Reno said she doesn’t just pass off her employees, she stays in touch weekly until people get acclimated in their positions.

Berwald also said the expectation is that more people will get back to work in the first quarter of next year, when the difficulties in hiring may ease up a bit.