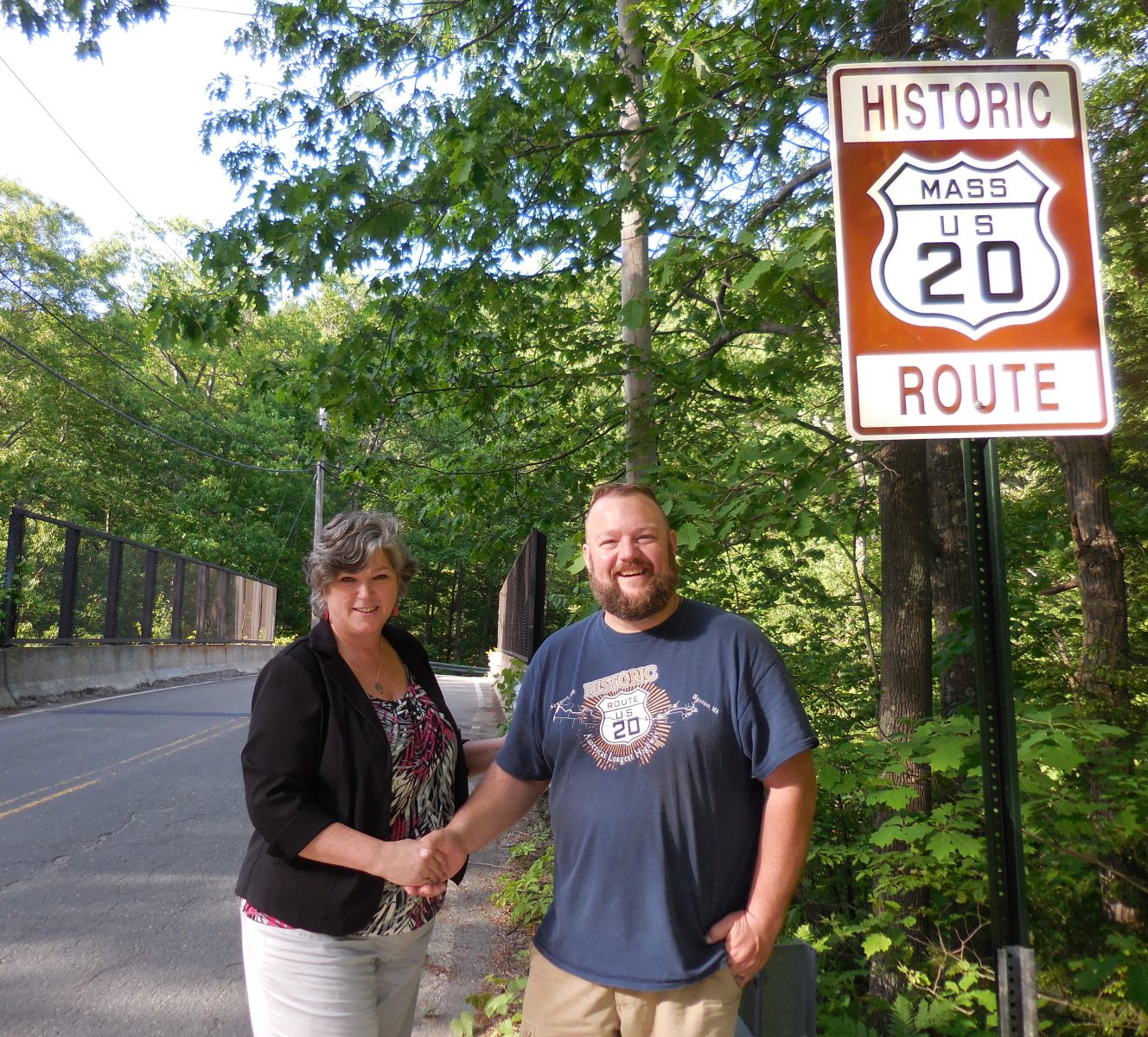 CHESTER – A new sign marking the Historic Route 20 was erected on Tuesday at the intersection of US Route 20 and the Old State Highway in Chester. Bryan Farr, president and executive director of The Historic US Route 20 Association put up the sign with the backing of the Chester Board of Selectmen.
“The town was totally behind the effort,” said Chester selectman Barbara Pease Huntoon, who was present for the sign’s unveiling. “We appreciate everything Bryan’s doing. He’s really kind of on a quest.”
The location of the sign in Chester was selected based on Route 20’s original alignment on Old State Highway, according to Farr. From 1926 to 1936, Route 20 was along the north side of the road between Huntington and Chester. In 1936, a disastrous flood wiped out many bridges along the Westfield River. The state then decided to move the highway to its present location. 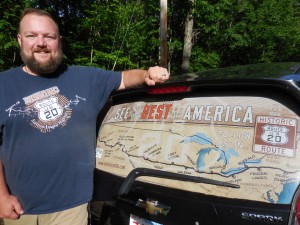 Bryan Farr, president of The Historic US Route 20 Association has the map of Route 20 displayed on his rear windshield. (Photo by Amy Porter)

The brown historic Route 20 signs are designed to be markers guiding travelers and tourists on the original highway locally and across the country. “Many people we have talked with want to take the original highway as it was assigned in 1926. Most of the original US 20 can still be driven in its entirety across the country without ever getting on the interstate,” Farr said. He said the organization has received calls and inquiries from almost every state, Canada and as far away as Switzerland and Australia about taking a journey on US 20.
Farr himself has traveled the whole route twice, all 3,365 miles from its start at the Citgo sign at Kenmore Square in Boston to Newport, Oregon on the Pacific Ocean. He says it takes about two weeks. He wrote a book about the trip, published in 2013, called “Historic US Route 20: A journey across America’s longest highway.”
Now his goal is to put Route 20 on the map as a cross-country travel destination, much like Route 66. “Route 20 has very little fanfare,” he said, adding that Route 20 and Route 66 were created on the same day in November 1925. “Many people do not realize that Route 20 was always intended to be a transcontinental highway. The zero indicated to travelers, that the road went from the Atlantic to Pacific.”
Right now, Farr, who lives in Chester, is focusing his efforts on Western Mass. Future signs are pending approval of local towns, including the Huntington portion of the road. Farr said In Massachusetts, when the roadway is maintained by the town, only town approval is needed to place the signage on the highway. Otherwise, permissions from MassDOT is needed.
In January, the Historic US Route 20 Association also sponsored a bill to make US Route 20 a historic highway in Massachusetts. Farr said the bill, which has other organizations sponsoring it as well, has come out of committee favorably. This would allow the placement of signs from Boston to Hancock.
Currently Chester is the second community in Massachusetts to erect the signage. Sturbridge was the first in the state to place signs on their portion of highway. To date, about 40 communities in nine states have put up the signs.
“We want to make Chester a destination for people,” said Huntoon. She said that Chester has a great history with the railroad, the keystone arches, and its abundance of gemstones, giving it the name “the Gem of the valley”.
“It’s sad. Route 20 is not the road it used to be. In the 1950’s when the turnpike came in – it really hurt the little towns,” Huntoon said, adding that her dad, who grew up in Middlefield, remembers Chester having five restaurants and a bus stop in those days. “The Historic Route 20 designation is definitely going to help,” she said.
“My goal is to bring people back to the small towns,” Farr said. “It’s a grass roots effort, going from town to town. Once we have support of the towns, it can continue to grow,”
Funding for the Chester sign and five other future signs comes from a Community Grant awarded to the organization from the WalMart Foundation via the Westfield Walmart. Communities, local organizations and individuals may also purchase signs from the organization via their website at www.historicus20.com.