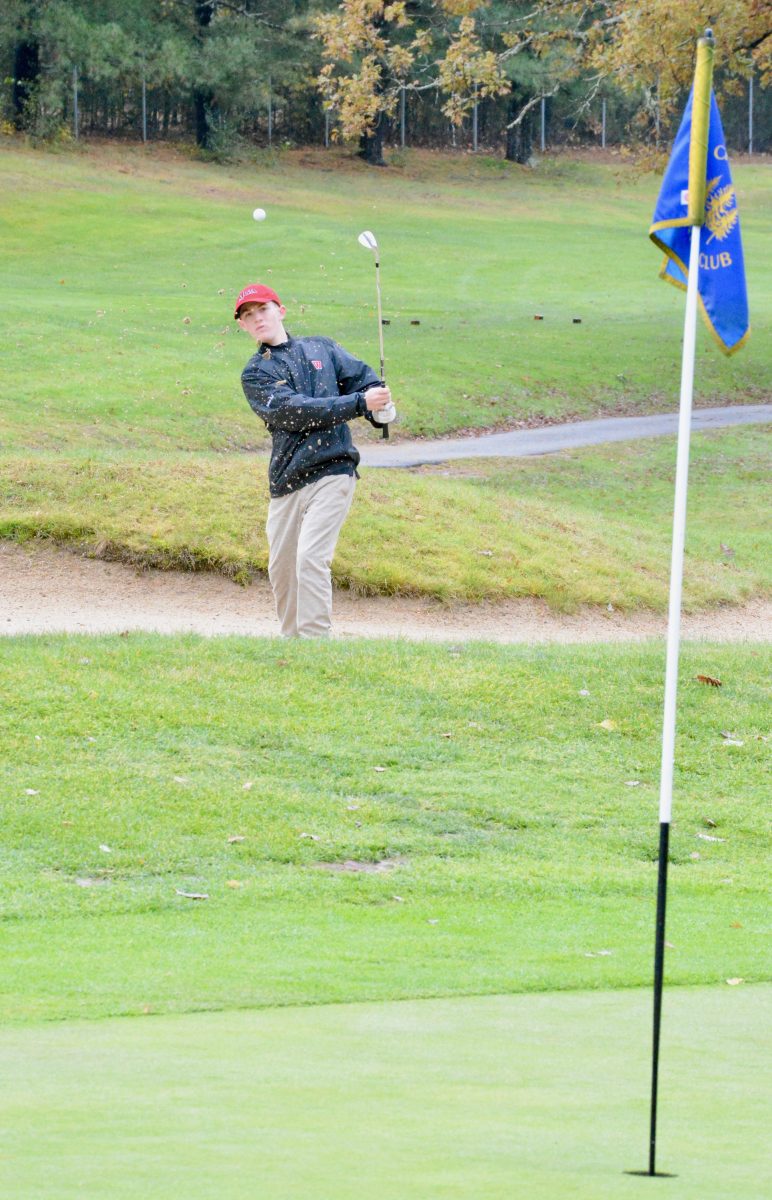 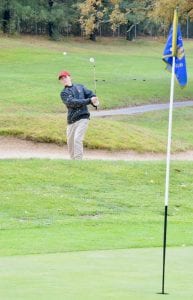 CHICOPEE – The best golfers from all around the state put their skills to the test, and one local student-athlete finished just outside the top 10.
Westfield senior Jack Hogan shot a 5-over-par 76 at the Division 1 state golf championships Monday at Chicopee Country Club to finish tied for 15th.
Brookline’s James Imai shot a first-place 67.
Hogan struggled at times putting but more than made up for it with an extremely effective day hitting the ball.
“It was his best of the season,” Westfield head golf coach Chris Strycharz said. “What a way to end it all.”
Hogan’s final shot was a pitch on the 15th hole that produced an eagle.
The Westfield High senior golfer concluded a career that figures to rank up there with former top Bombers’ Ryan Towle, Lee Albertson, and Dan Fanion.
Hogan missed the cut in qualifying for the state championships by just one stroke his sophomore and junior year. He averaged 38 this season before finishing sixth at Western Mass. There, he shot a 10-over-par 82.
DIVISION 3 UPDATE: St. Mary’s Luke Willenborg had a nice showing with an 83 at the D3 championships at Black Swan Country Club in Georgetown.

BOYS SOCCER
Tigers advance to finals
MVADA Vocational and Technical School State Tournament Semifinals
Westfield Technical Academy 2, Lynn Tech 1 (PK)
Westfield Tech goalie Dave Antonovschi stopped 22 penalty shots to send the Tigers to the MVADA finals Wednesday.
Stephaun Nikiel opened the game by stuffing in a rebound off a direct kick for the early 1-0 lead. Lynn Tech responded with a nice cross off the crossbar that found the back of the net.
In the two overtime sudden victory periods, Lynn Tech put the pressure on. Antonovschi responded with two amazing saves, including a hard shot lower right corner from about the PK mark that he swallowed up.
“Lynn Tech was very impressive,” Westfield Tech coach Kyle Dulude said. “They understood the game extremely well and had some very skilled players. …We did what we had to to survive and advance.”
Westfield Tech’s Frank Florek played center fullback for the first time in his four-year career.
“(I’m) very proud of a kid who has probably been the most humble over his four-year career step up at the most important time of the season,” Dulude said. “All the kids played extremely hard and today that effort was rewarded.”
Westfield Tech advanced to Wednesday’s finals (Roots Field, 3:30 p.m.), but before they can focus their efforts on that game, they must travel to McCann to close out their regular season schedule Tuesday afternoon.

Gators end on high note
Gateway 2, Smith Academy 0
Gateway (6-11-1) scored two first half goals – one each from Joel Sekarski and Ben Hyjek – in a shutout.
Ryan Morin and Evan Lee assisted.
Jon Foley and Preston Coffey each finished with three saves for Gateway.

GIRLS SOCCER
Saints squeak out ‘W’
St. Mary’s 3, Hampden Charter School of Science 2
St. Mary’s stopped Hampden Charter’s 14-game winning streak with a three-goal effort from Allie Goodreau. Emma Goodreau had two assists, and Maddie Donais had one.
Amelia Willenborg was excellent in net, making 12 saves for St. Mary’s. Saints’ Paighton Ramos, Caroline Leahy, Macy Woodger, and Erin Olearcek were stout on defense.
St. Mary’s finished the regular season 11-5-2.
“(I’m) so proud of the season we have had to date,” St. Mary’s coach Patrick Olearcek said. “This was just an incredible way to end the regular season it literally was one of the program’s biggest wins in a very long time. Let’s see if we can sneak up on some teams in the tourney.”

Chepurin nets goal
Putnam 3, Westfield Technical Academy 1
Captain Angelica Chepurin scored the lone Westfield Tech goal after a trip on the outside edge of the 18.
Westfield Tech goalies Aubrey Bryant (8 saves) and Caitlen Carter (5) combined for 13 saves.
“Our season record doesn’t reflect how these girls played or showed the amount of potential they have,” Westfield Tech coach Lyle Washington said. “I’m really looking forward to next season.”
Westfield Tech closed out the home portion of its schedule with a 3-0 shutout of Commerce Friday at Jachym Field.
Chepurin scored two unassisted goals and Commerce had an “own goal” trying to clear the ball from an onslaught of Tigers’ shots.
Jordyn Sanders, Kiki Serrano, Jess Goretskiy and captain Leillani Marsh anchored a strong defensive effort.

Gators secure title
Gateway 1, Easthampton 1
Easthampton scored three minutes into the game on 23 yards from Maila Sands to go up 1-0. Ava Auclair tied it for Gateway on a beautiful shot from the left outside of the box to the upper right corner.
Gateway goalie Becca Herman made three saves.
The victory sealed a Pioneer North League title for Gateway (12-2-2, 9-1-2).