WESTFIELD-For more than 140 years, the city has had photographers capturing indelible images for posterity, and one only has to look now at the Westfield Community Forum’s Facebook page to see that individuals like Danny Nason are continuing that tradition. 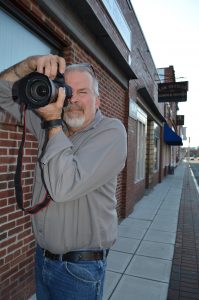 Danny Nason uses his Canon camera and iPhone to capture images of the city.

“Unless I have a specific subject in mind, I never really know what I’m going to photograph until I see it,” said Nason. “Time of day, lighting, and weather play a big part of what looks good at any particular time.”
On a recent late afternoon, Nason shared why photographing the city in his spare time is important to him.
“If I’m not helping I’m part of the problem,” said Nason, who started the Facebook page Whip Westfield Back Into Shape. “I try to make the photos endearing and bring out what the eyes can’t see.”
Nason’s subjects are varied, from obsolete signs including Valley Electric on School Street, to businesses and individuals who call Westfield home. 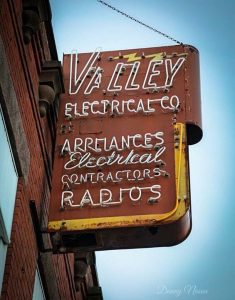 A sign from an earlier era on School Street in Westfield. Photo by Danny Nason, 2017.

“My main goal through photographs is to have people come downtown and look around,” said Nason, adding, “I find new businesses all the time. If I spot something I haven’t seen before I want to share it.”
Nason added that while he uses his Canon camera most of the time, his iPhone is also a valuable tool with its sophisticated apps.
“People think I use filters but the photos are enhanced during post-processing,” said Nason, adding that iPhone apps and tools including Light Room software are tricks of the trade. 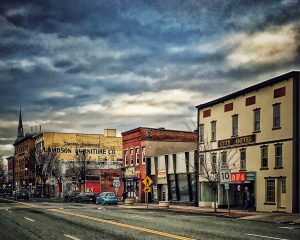 Individuals seeing the city in a new light through the eras and camera lens have also included lifetime resident David Mosher, 87, who now resides at the Governor’s House, and the late Ross Conner, according to historian Dr. Robert Brown.
For images from the 1870’s to the 1930’s, photos from the “Ross Conner Collection” are most notable by area residents, but one gentleman, Mosher, captured downtown vividly for more than 60 years. More than 4,000 of Mosher’s photos are now part of the city’s archives. He was recently honored by Mayor Brian P. Sullivan with the Westfield Historic Commission’s annual Westfield Preservation Award titled “Our Past Into the Future.” 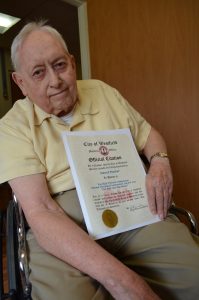 “I felt humbled,” said Mosher of the award, who noted he worked all his life at Columbia Manufacturing and when he wasn’t working, he enjoyed canvassing the streets of the downtown area seeking out his next photograph.
“I enjoyed walking around downtown and also taking photos on Sunday drives in the hill towns with my parents,” said Mosher.
Brown joined in the conversation at the Governor’s House and said Mosher never had a “grand plan” for his photographs but his contributions which are now a part of the Westfield Athenaeum’s archives is invaluable.
“David caught images that captured Westfield’s history,” said Brown. “Construction and demolition, fires and parades, storms and accidents – all were subjects of his camera if they were near to David’s location at the time. He just carried a camera and if something caught his eye, he photographed it.”
Before Mosher, many lifelong residents remember photos from the “Ross Conner Collection” which appeared in the Westfield News over the years. Conner was a businessman and a photographer for the Springfield Newspapers. His family owned Conner’s on Elm Street for more than 100 years. 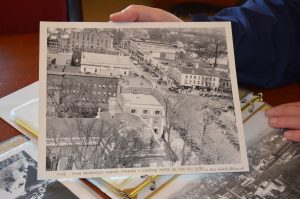 Dr. Robert Brown holds a photograph from the 1920’s that was taken from the old steeple of the Methodist Church on Court Street. The photographer is looking north on Elm Street which includes trolleys on the Green, Lambson’s Furniture, the Professional Building and the Courthouse. The photo is from the Ross Conner Collection.

“The Conner family rented space upstairs to photography studios and as each studio left – they left their stock behind,” said Brown during a tour of the climate controlled Westfield Archives Department at the Westfield Athenaeum.
“By the 1970’s Ross was retiring and selling Conner’s and asked if I was interested in purchasing all of the archival material he had acquired over the years,” said Brown, noting he was a book and ephemera dealer. “I contacted Joseph Carvalho at the Connecticut Valley Historical Museum in Springfield and we agreed the repository of materials were appropriate for the museum. We raised the money that Conner sought and moved the collection to the museum. I didn’t want the collection to be lost, I knew it had to be saved.”
Today, Nason and others carry on the tradition that individuals including Conner and Mosher once enjoyed. 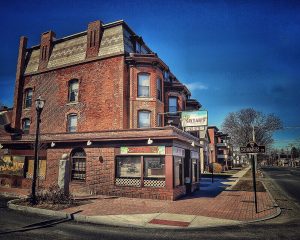 Brown noted that Kate Deviny, the Westfield Athenaeum’s archivist, is always seeking old photographs and documents to fill in the blanks of the city’s history.
“The Athenaeum can also make copies of old photos that are owned by city residents,” said Brown.
Whether one is experiencing the city from the perspective of the 1870’s or today – while some aspects of the city has changed – other institutions remain the same. 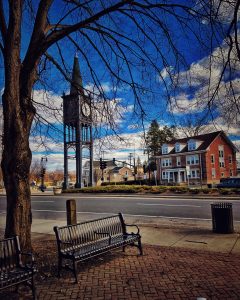 “Photographs hold our town’s memory,” said Brown. “The city welcomes photos, negatives, and glass plates for preservation purposes to ensure future generations understand what life was like in the city through time.”

On a related note, Nason will join other gallery artists selling their artwork at Articulture 2017, slated April 22 at the Westfield Woman’s Club on Court Street. Nason noted that 99 percent of his work that will be on display and for sale will feature Westfield backdrops. His 8 x 10 prints – metallic or plain – will also be matted. Articulture 2017, slated from 1 to 10 p.m., will also feature musicians and literary artists.