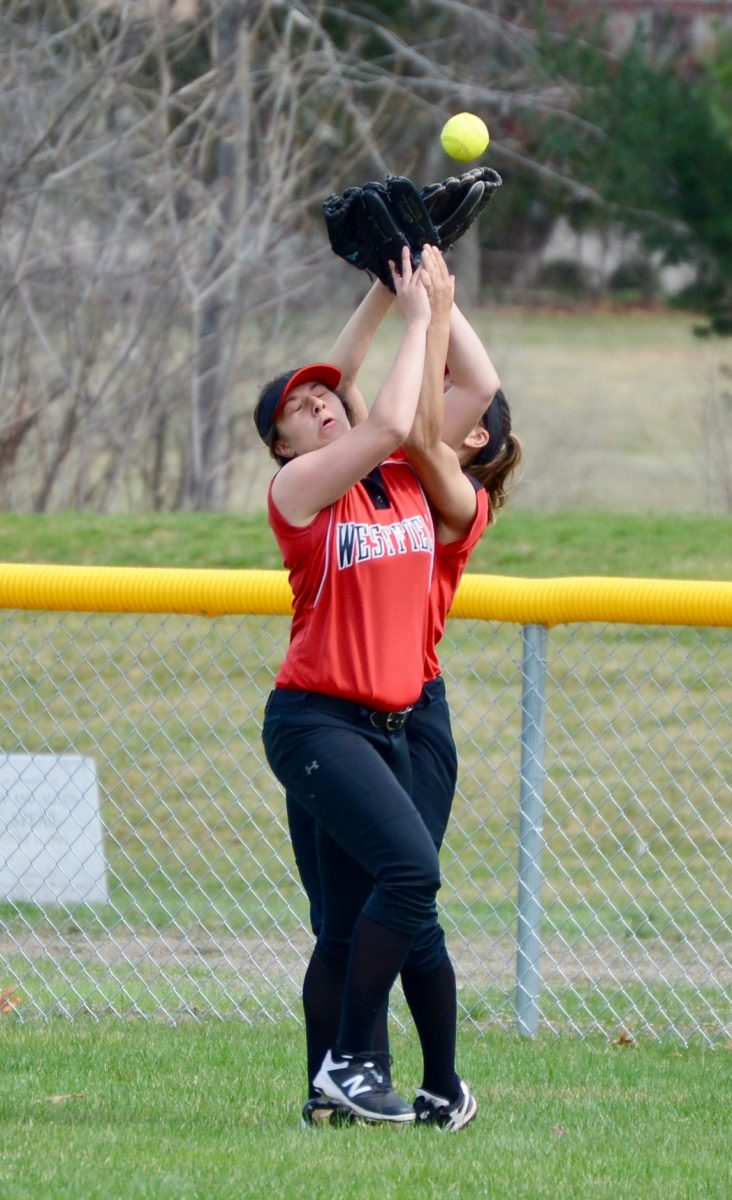 WILBRAHAM – The first day of school vacation week turned out to be no picnic for the Westfield High School softball team.
Minnechaug sophomore pitcher Katelyn Thompson tossed a no-hitter, striking out four batters, and the Falcons cruised by the Westfield Bombers 13-1 early Monday in Wilbraham.
Fueled by five Westfield errors, Minnechaug jumped out to an early lead and leaned on the strength of their young hurler. 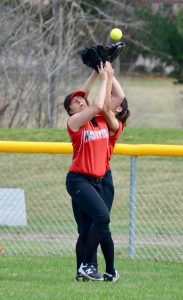 Outfielders collide for Westfield on a pop fly Monday morning at Minnechaug Regional High School. Neither player appeared to be hurt on the play. (Photo by Chris Putz)

“Thompson pitched a good game and never let us get any momentum,” first-year Westfield High head coach Tim Desmond said. “They are a very good hitting team with an excellent pitcher. She had our number today.”
Westfield (0-3) entered Monday’s contest having lost two straight heartbreakers.
“Our bats just haven’t come alive yet,” said coach Desmond, who served as an assistant coach with the team for several years. “When they do, we will be fine. Right now we are pressing and making too many errors. We have had some good pitching but haven’t given them defensive support.”

Lachtara, Rams victorious
Southwick 4, Monson 1
Emily Lachtara pitched a one-hitter, helping Southwick come away with a road win.
Caroline Wilcox hit the game-tying run with a base hit in the seventh inning. Emily Barnard followed with a well-placed bunt. Tori DellaGuistina plated the go-ahead in the seventh with a ground-rule double over the outfield fence.

Daley double
St. Mary 2, Hopkins 0
John Daley pulled double duty for the St. Mary baseball team.
St. Mary’s stormed out of the gates with two runs, and held off Hopkins thanks in large part to Daley’s RBI hit and his dominating presence on the mound.
Daley also tossed a two-hitter while striking out 12 batters.

GIRLS’ LACROSSE
Bombers comeback quelled
Northampton 14, Westfield 10
“It was a great game,” said Westfield coach Paul Fenwick, whose team rallied to within two goals with about 10 minutes remaining in the second half before running out of steam. “We definitely won the second half.
Olivia Chaoush (3 goals, 1 assist), Sydney Brady (2 goals), and Mackenzie Liptak (2 goals) contributed offensively for Westfield. Bombers’ goalies Yvonne Headley and Liz Clark were solid in net.