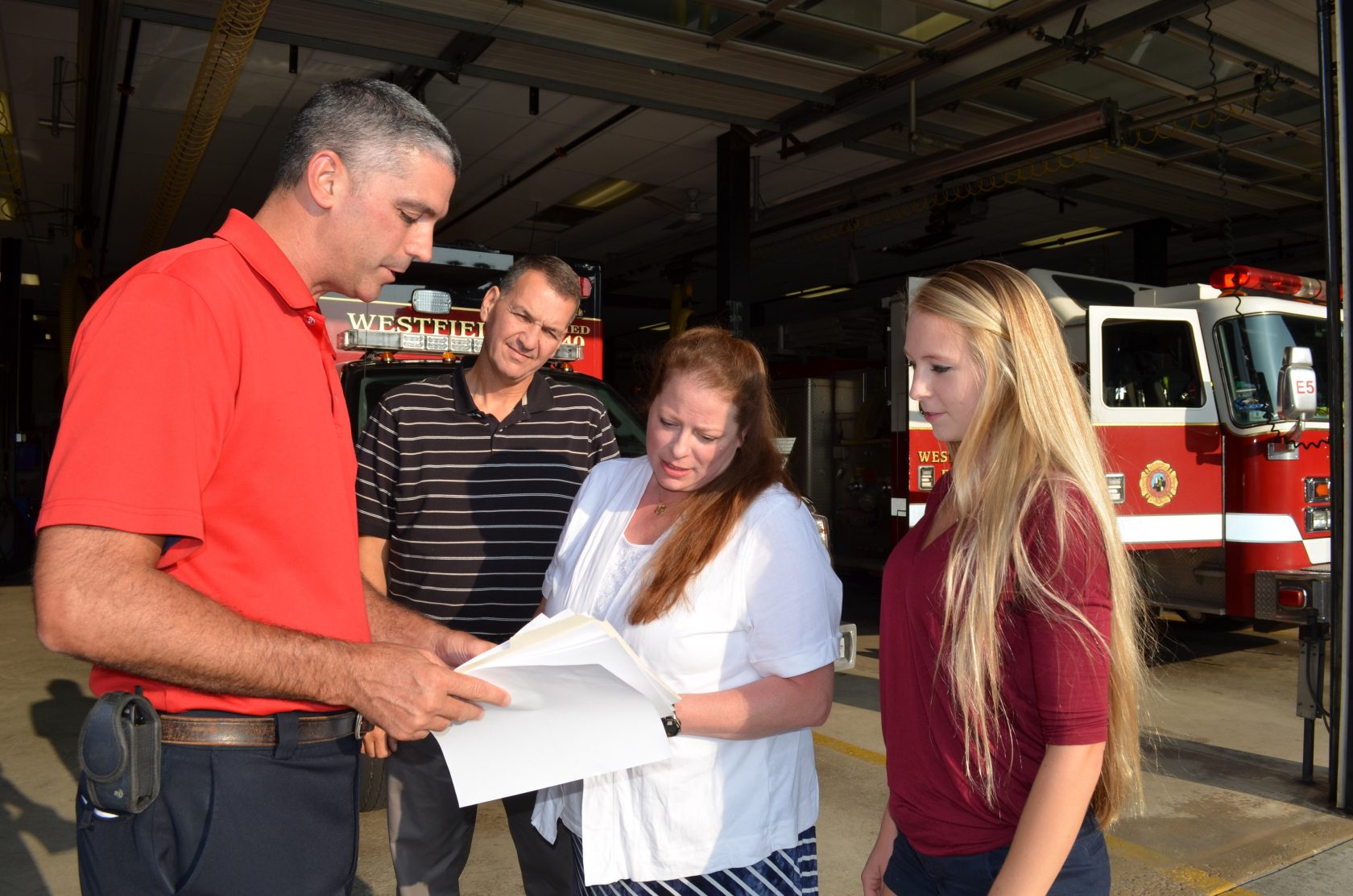 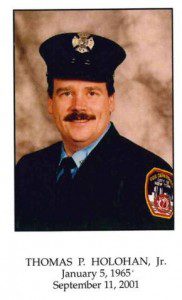 By LORI SZEPALAK
Correspondent
WESTFIELD – From a simple assignment in Jeff Piper’s world history class at the South Middle School, one boy’s loss became personal for his classmates.
“At the start of every school year I ask students to tell me about themselves,” said Piper. “When Liam Holohan said his father, a firefighter, died on 9/11, I didn’t make the connection until he wore a shirt from the New York Fire Department Engine 6 Company on Sept. 11.”
Thomas P. Holohan, Liam’s father, was one of the firefighters on the “riding list” who were first on the scene when the World Trade Center attacks occurred on the morning of Sept. 11, 2001. Holohan, part of Engine 6 Company, located in lower Manhattan, was a first responder because of the proximity to the World Trade Center, and the department’s specially built pump that could push water to the top of the 110 story towers. Engine 6 was hooked into a Trade Center standpipe on West Street when the collapse of the North Tower destroyed the pumper. Holohan died along with fellow Engine 6 firefighters Paul Beyer, William “Billy” Johnston, Thomas O’Hagan, Jack Butler and Billy Green. 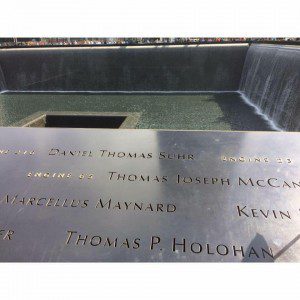 Thomas P. Holohan is remembered as one of the Engine 6 Company firefighters who lost their lives on Sept. 11, 2001 at the National September 11 Memorial in New York City. The Holohan family has resided in Westfield since 2008. (Caitlyn Holohan photo)

During Piper’s history classes, he especially spends time with his students on Sept. 11 and on Dec. 7, Pearl Harbor Day.
“I made sure with Liam that he was OK with discussing 9/11 and he said yes,” said Piper. “Once students realized that Liam had lost his dad, they were more compassionate. It was nice to see that interaction with students.”
Piper noted that once he realized that people in the community did not know about the Holohan family, he contacted Andy Hart, deputy chief for the Westfield Fire Department, who coordinates the yearly 9/11 remembrance program.
“I contacted Andy to see if the Holohan family could be recognized on Sept. 11 during the remembrance ceremony,” said Piper.
Since 9/11, the Westfield Fire Department has conducted a solemn ceremony at 10 a.m. on Sept. 11 at its headquarters at 34 Broad St.
This week, Hart will introduce the Holohan family who have lived in the city since 2008. Area residents are welcome and encouraged to attend the ceremony which includes a call to attention to present arms, lowering the flag to half mast, providing a moment of complete silence, reading prayers including the Firefighter Prayer, welcoming dignitaries and the Holohan family, providing a profile of Thomas P. Holohan, and concluding with bagpipers playing. Refreshments will follow in the department’s kitchen.
For Colleen Holohan, moving from Chester, N.Y., to Westfield was a decision that made sense to her.
“In New York, everyone knows you and they want to support and help you,” she said. “Even with all of the support, it got overwhelming. Our kids were young and I was trying to protect them.”
When her parents relocated to Westfield and a home became available next door, she knew the time was right to make the move with her children, Thomas III, Caitlyn, and Liam.
“My dad was my rock for me,” she said, adding that Westfield felt like a “country town and a good place to raise kids.”
Holohan explained that her husband’s family had a rich history with the New York Fire Department. His grandfather, a battalion chief, was working when a plane crashed into the Empire State Building in 1945; his uncle, a captain, was injured in the 1993 bombing of the World Trade Center, and two cousins are also firefighters.
“Tom was an internal auditor but wanted to be a firefighter,” said Holohan. “He was very patient, kind, and could calm people so I knew being a firefighter would be a perfect job even though it was dangerous.”
Holohan said she knew in her heart how much being a firefighter meant to her husband so “you make sacrifices for the ones you love,” she said.
On the morning of 9/11, her husband should have been on his way home from a shift.
“I thought he was on his way home but everyone was called and they all just went to the scene,” she said.
For Holohan over the years, being a single parent has been “challenging” but she has tried to make the best decisions based on conversations she had with her husband early in their marriage.
“We were just starting to live our dream,” she said.
At this week’s ceremony, Holohan said she knows this remembrance will be especially important to her daughter.
“This ceremony is especially important for Caitlyn,” said Holohan. “I’ve learned that she wants to see how her dad is memorialized.”
While Caitlyn Holohan has visited the National September 11 Memorial at the World Trade Center site, Colleen Holohan has been unable to make the trip.
“I’m afraid to go there because I don’t know how I’ll react,” she said. “I did go to Ground Zero when it was on full alert – you could hear a pin drop.”
While Holohan knows that 9/11 will be a “wound that will never heal,” she concentrates on her children and their studies. Thomas is majoring in digital forensics at Champlain College in Vermont, Caitlyn is majoring in graphic design at Holyoke Community College, and Liam is now a sophomore at the Westfield Technical Academy.
“9/11 is always a day of remembrance,” said Holohan, adding, “We also remember the camping trips, Tom’s playfulness, his love of cooking family dinners, and his good sense of humor.” Caitlyn Holohan echoed those sentiments.
“My dad taught me how to fish but my favorite memory is being on my dad’s fire truck and dressed up with his stuff,” she said.
“He wanted a job where he could make a difference,” said Colleen Halohan.