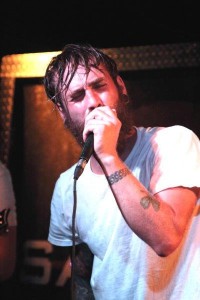 NORTHAMPTON – Idaho’s We As Human teamed up with local boys Sakara for an evening of Rawk at the Pearl Street Nightclub in Northampton last Thursday. Sponsored by Lazer 99.3, Pearl Street showcased two very good bands on the rise.
We As Human are riding the wave of a successful radio single, Take the Bullets Away and have been touring relentlessly for the past couple of years to gain a following. Although the show was located in the downstairs part of Pearl Street, We As Human’s local fans showed up to support the band.
The band is in the middle of a major tour opening up for Black Stone Cherry and this show gave them the opportunity to headline. Most songs played on this night came from their latest release, also titled We As Human, and included Sever, Zombie, I Stand and Dead Man.
A little three-song acoustic set changed things up a little midway through the set and showcased some great guitar and vocal work. The band ended the night with a ripping version of Strike Back. This is a great band to check out live if the opportunity presents itself and the release is extremely solid from start to finish.
Western Mass.’s very own Sakara opened the show with a 30-minute set of mostly originals. With a recent release Forgetting What Was under their belts, these guys have been very busy. First an opening slot for Staind at Mohegan Sun, then a month-long tour with Skid Row and they have also been trying to get in as many local shows as possible.
Sakara played a number of songs off their release, including Jonah, Headlines and From Ashes. Also thrown in the set was a great cover of an Alice in Chains tune, Them Bones.
Stayed tuned for a possible new tour announcement and while you are at it…go online and support this band by buying their record.
Weekly Buzz…
KISS and Def Leppard rawk the Xfinity Theater in Hartford, Conn on Sunday. It will be worth the effort to get their early and check out a relatively new band, The Dead Daisies, who are opening the show. The Daisies consist of rawk and roll veterans Jon Stevens(former INXS singer), Richard Fortus (Guns n Roses guitarist), David Lowy (Rhythm guitar), Dizzy Reed (Guns n Roses keyboardist), Marco Mendoza (fresh off his stint with Black Star Riders and formerly Whitesnake) and drummer Brian Tichy (Billy Idol, Ozzy, Whitesnake… to name a few).
Check out this line up of major bands coming to the Palladium in Worcester: August 16 Powerman 5000, September 6 Sonata Arctica, September 16 Crowbar, October 8 Butcher Babies, October 9 Alter Bridge, October 16 King Diamond, October 25 Arch Enemy, October 31 Happy Halloween with Killswitch Engage and All That Remains, November 22 Black Veil Brides, November 28 Slayer and November 29 Halestorm.
The Webster Theater in Hartford has the following bands lined up: Fit for a King on August 8, Skid Row August 16, Bless The Fall and Chiodos on Aug 21, Overkill and Prong on September 26, Amon Amarth on October 15.
Mohegan Sun, recently ranked among the top venues in the world today… yes I said world, has a number of great Rawk shows coming our way. Godsmack and Skillet will be there on August 20, Five Finger Death Punch and Volbeat September 28, Motley Crue and Alice Cooper on October 26. Mohegan Sun is definitely deserves the recognition it gets. Not only do they get the best of the best to perform there, but the way they handle shows is like clockwork. The Sun Arena is ranked eleventh in the country and 37th in the world. This place is in our backyard folks, if you want to go see some of the best music acts live… check out www.mohegansun.com for more information.
The legendary Toad’s Place has recently booked a couple of cool Rawk shows: Adrenaline Mob is there August 22 and New Found Glory October 17.
Mike Augusti’s Rawk Report provides live reviews of local concerts in Connecticut and Massachusetts. The Rawk Report also includes new music releases and upcoming concerts to the area. Contact Mike at [email protected] for any questions or comments.