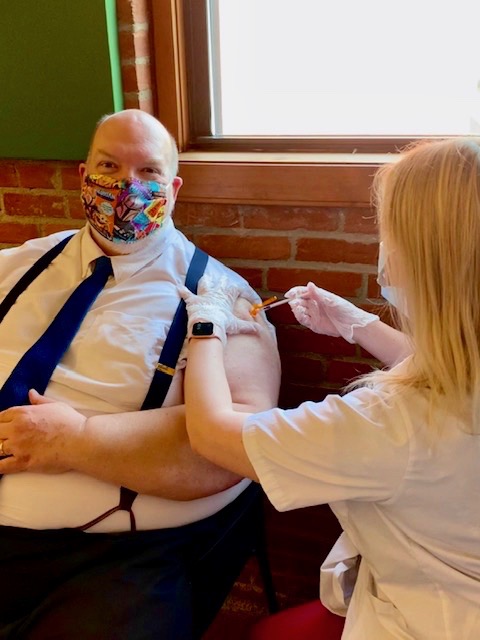 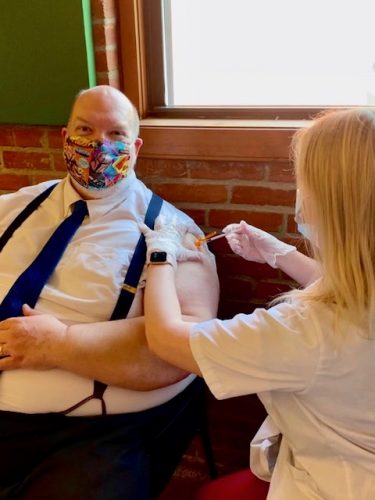 WESTFIELD – Mayor Donald F. Humason Jr. was among the three dozen or so people who received a vaccination at the pop-up Pfizer clinic at the MillWorks Co-Sharing Workspace June 19-21.

Humason said it was “in and out, no problem.” He said it was a smaller turnout than owner Rocky Allen expected, but still, people came. “Any one of these clinics, whether privately done like his or at CVS; little by little, anyone who wants a vaccine can get it.”

Humason said he wanted to go to Rocky’s clinic because he wanted to visit the shared workplace and support the Mill. “I’ve always liked old mills, especially overlooking the water. The brick and wood is really nice,” he said.

He said the woman administering the shot was from CVS and very professional. She had also just moved to Westfield, so he got to meet a new resident. He also enjoyed a sandwich from the Pottery Barn, and a coupon for the Great Awakening Brewing Co., both located in the Mill at Crane Pond, 77 Mill St., that were offered as incentives.

Humason said he hadn’t received a shot before now because he had tested positive for COVID-19 in March. He had a mild case, but after his 10 days in quarantine went to Baystate Noble, where he received  monoclonal antibodies. He then had to wait 90 days before he could be vaccinated. His next shot is scheduled in three weeks, and he said he will go to CVS for it.