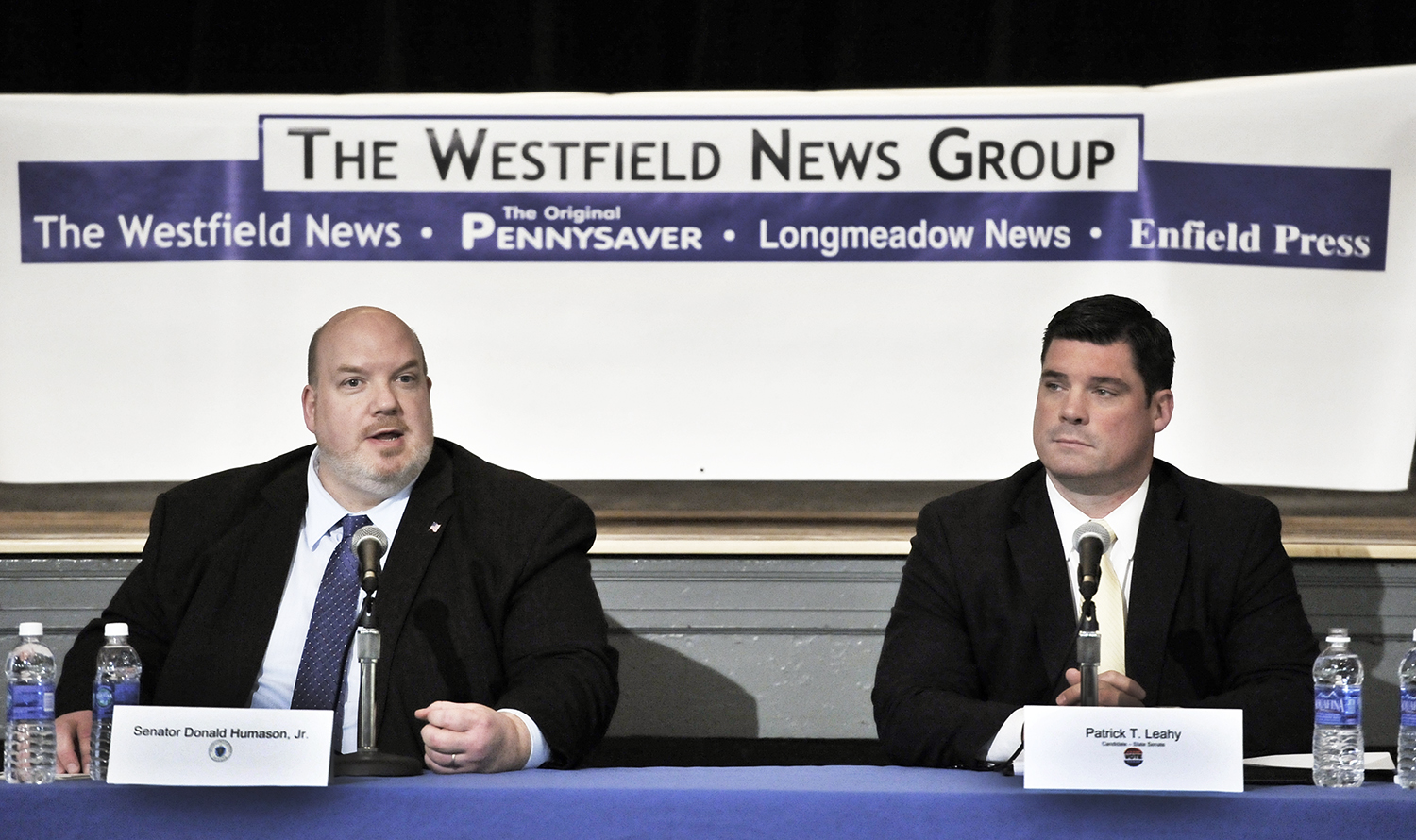 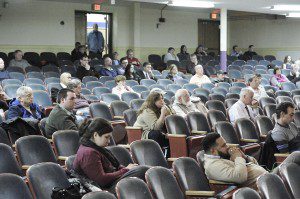 Residents gathered in the Westfield Vocational-Technical High School auditorium to participate in last night’s candidate forum sponsored by The Westfield News Group and the Greater Westfield Chamber of Commerce. (Photo by Frederick Gore)

WESTFIELD – In front of a crowd who took shelter on a damp dreary evening in the auditorium of Westfield Vocational-Technical High School’s upper campus, the two candidates for the 2nd Hampden-Hampshire District State Senate seat faced off in a forum sponsored by The Westfield News Group.
The candidates – incumbent Westfield Republican Don Humason, Jr. and Holyoke Democrat Patrick Leahy – sparred for an hour on issues ranging from gun crime to the four statewide referendum questions on the November 4 ballot that will also bear both their names. 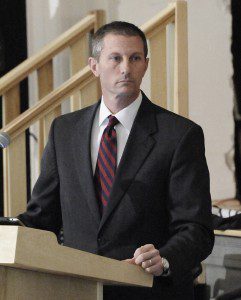 Moderated by Westfield News Group President Patrick Berry, the two candidates played to their strengths throughout the evening, with Humason touting his years as Westfield’s State Representative and his experience in Boston, which Leahy – a police officer and Realtor making his first run for public office – believes is the district’s problem.
“My opponent has said the experiences he has in the Statehouse makes him a better candidate for state office and I couldn’t disagree more,” said Leahy, who cited several times during the evening his prior work with former State Treasurer Shannon O’Brien rooting out government waste and corruption.
“We need people in Boston who have worked in the real world, who have seen the laws that are passed in Boston and how they’re actually applied on the streets, from the hilltowns to the downtowns,” he said. 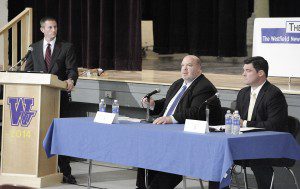 Despite Leahy’s attempts to paint him as an insider, Humason replied that he is still in touch with the people he represents.
“I only work in Boston – I live in the real world,” said Humason. “I grew up right here in the city of Westfield, working through high school and college.”
“I’ve held all sorts of jobs and it wasn’t until I got to college that I decided the direction I wanted to take was public service,” said Humason. “I think it’s a little disengenuous for a police officer to say that I can’t do the job because I’m in public service.”
When asked who the two candidates would support in the race for the 4th Hampden district seat in the House of Representatives, Humason refused to answer the question, citing the relationship he has developed with the current Rep., Democrat John Velis.
Velis will be facing off against Republican at-large City Councilor Dan Allie in a rematch of their April 1 special election to fill Humason’s old seat.
“Regardless of who takes that position – the incumbent or the challenger – I pledge to work side by side with them,” said Humason.
While a Holyoke resident, Leahy stated he would support Velis if he resided in Westfield before taking a tacit jab at Humason, who endorsed Allie prior to the spring special election.
The issue of housing homeless citizens was also raised, with Leahy saying that there should be a move away from housing them in hotels.
“We need to move to a voucher program so we can move people out of hotels,” he said. “There are programs in Holyoke that are taking over buildings and making them temporary shelters for families in transition. This has been languishing under the leadership of this man (Humason).”
Humason retorted that the plan to house the homeless in hotels was put forth by Governor Deval Patrick.
“This plan was sent down through the Division of Housing and Community Development and is not one widely supported by legislators, Democrat or Republican,” he said. “We’ve seen the damage it causes to the people it should be helping. Many of the people being housed in Chicopee or Holyoke come from eastern Mass.
“It’s wrong to move people away from their families and their schools.” Humason stated.
Regarding the aforementioned statwide ballot questions, Humason replied “yes, no, no, no”, meaning that he would be voting to repeal the automatic gas tax, but against expanding the state’s bottle bill, repealing the state’s casino gaming law and the earned sick time questions.
Leahy didn’t reply in favor or against the gas tax but stated that he would vote to repeal the casino law and that he was in favor of earned sick time – which would allow workers to earn up to 40 hours of sick time a year – and expanding the state’s bottle bill.
“There’s more plastic bottles thrown into the trash than ever before in the history of the world probably. There’s enough plastic bottles thrown into our landfills to fill Fenway Park five times,” said Leahy. “This is the expansion of a very successful piece of legislation that has proven time and time again that it makes our streets cleaner.”
Making the streets cleaner in regards to illegal guns and drug crime were also points of contention between the two candidates, with Leahy criticizing Humason for voting against a recent gun bill.
“When Don votes against a gun bill – because of one small thing he has yet to tell us why – that GOAL (Gun Owners Action League) said was one of the best pieces of legislation to go by… as a police officer, I could not believe he would try to play it like a typical politician,” said Leahy. “When Don throws out the baby with the bathwater on a good gun bill that was just finally passed, it doesn’t help anybody.”
Humason applauded Leahy for his work as a police officer and stated that the issue with guns and drugs have gotten worse.
“The legislature just this past session in the Senate has expanded treatment for people who have become addicted to opioids and we mandated that insurance treat them for longer periods of time,” said Humason. “I’ve been endorsed by the Gun Owners Action League and I support the law-abiding gun owners of this state while at the same time trying to crack down on criminal gun owners, as well.”
Humason reaffirmed his support for the second amendment, stating that he is a longtime member of the Westfield Sportsmans Club.
“I’m a shooter and gunowner and learned how to shoot from my Mom, Dad and grandparents,” he said. “I learned early on how to handle a firearm and I’d like to encourage everyone – whether you choose to become a gunowner or a shooter yourself – to know how to handle a firearm safely.”
Leahy did not answer directly whether or not he was a second amendment supporter, but continued to pick at Humason’s vote against An Act Relative to the Reduction of Gun Violence.
“The dangerousness hearing… that’s where we keep bad people off the streets if someone does something egregious. This bill that Don voted against would give DAs the ability to keep people with lengthy records off the street,” said Leahy.
At the debate’s conclusion, Humason and Leahy faced the voters for three minutes and made their cases.
“I believe we get the government that we deserve,” said Leahy. “All of the parts of our district need a strong advocate. I’m the only candidate that has gone down to Boston and prevented crime and that’s answered a 911 call.”
“It has been an honor to represent this community and all of the communities in this district these past 11 months and I’m hoping to get the opportunity to get back for my own full two-year term,” said Humason.