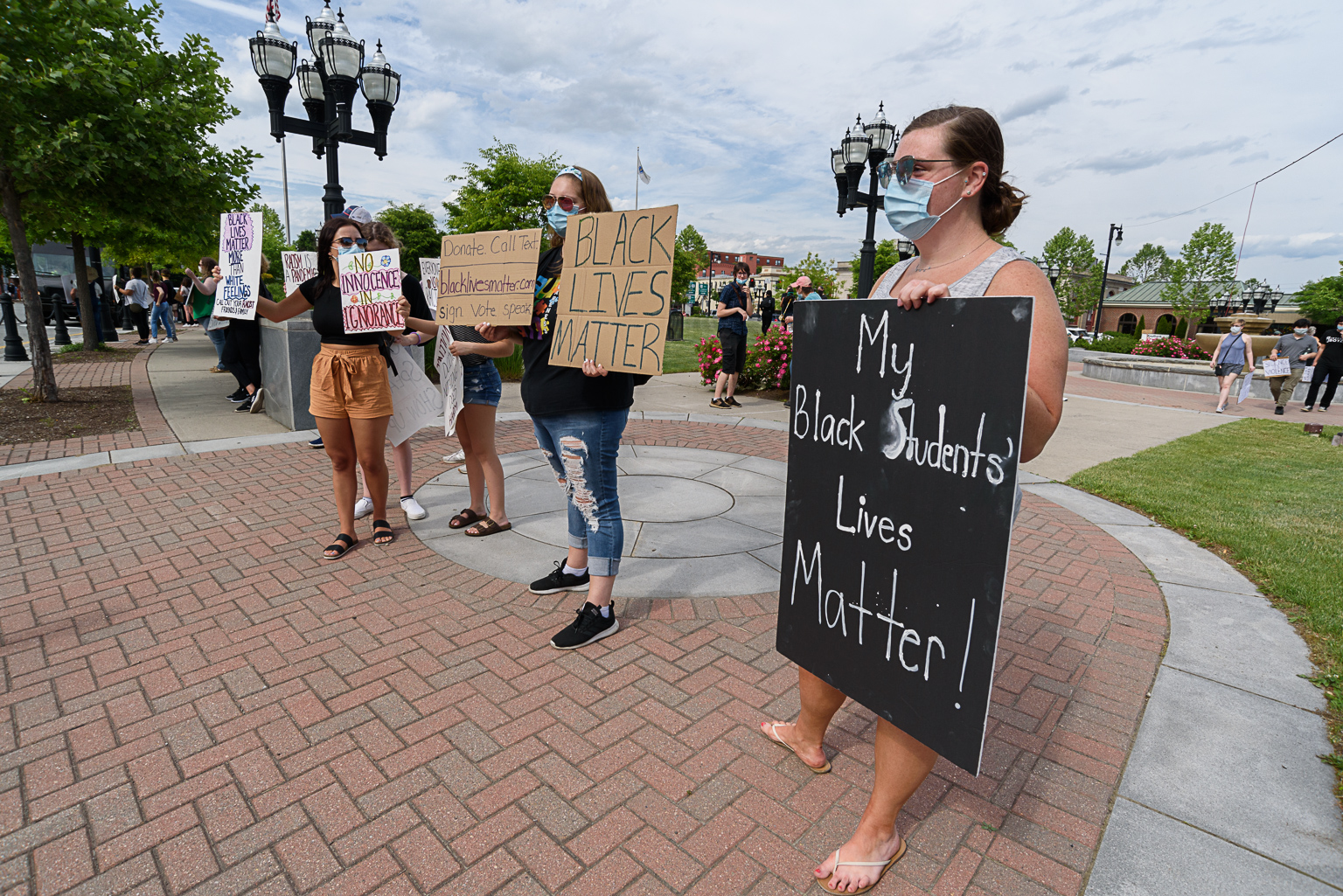 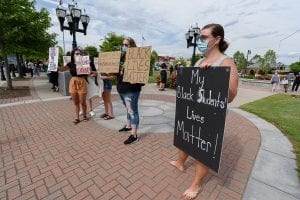 WESTFIELD- Hundreds of demonstrators gathered on the Park Square Green Thursday evening to protest the murder of George Floyd and to show solidarity with the growing Black Lives Matter movement.

“So we decided to get this set up to help get the conversation started,” said Barrien.

Berrian is a teacher at Westfield Technical Academy and Wheelock is a former student of hers.

While there were some instances of arguments and some tension between individual protesters, the event itself remained peaceful with no notable incidents reported by police.

Westfield police officers stood outside the perimeter of the protest around Park Square. Protesters chanted slogans such as “Black Lives Matter,” “No justice, no peace,” and “I can’t breathe,” which were some of the last words of George Floyd as he lost consciousness under the knee of now former Minneapolis Police Officer Derek Chauvin.

Some protesters were going around encouraging and helping people to register to vote ahead of the November elections. 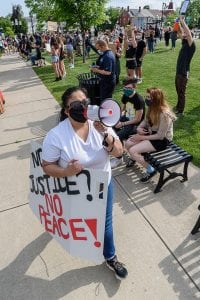 Police Chief Lawrence P. Valliere said he was pleased with how the protests went, and was happy that people could peacefully exercise their first amendment rights.

“I totally understand their frustration,” said Valliere, “I am personally tired, as many other officers are, of taking the hit for a few egregious acts from other law enforcement across the country.”

He said that he and his officers do their best to conduct themselves properly and that it is not in their mindsets to hurt anybody.

“We truly are out here to help people, to make a difference, and to do what the police officers are supposed to be doing and what they are designed to do,” said Valliere, “When i see these situations on the news, I am just as sick of this as the average person. I have no sympathy for the offending officers.”

He said that while he completely agrees with the message the protesters sent, he does not condone the destruction and violence that has accompanied some of the other protests across the country. He was pleased to have seen none of those things in Westfield on Thursday

“We appreciate their cooperation and the respect they gave to us and the community,” said Valliere.

Throughout the protest, individuals would stand up on the raised stage in the park and speak through a megaphone to the crowd. The speakers talked about what it meant to be there, how they have experienced racism, and what needs to be done going forward to end the issue of  systemic racism and police brutality.

After several people spoke, the crowd was urged to observe a moment of silence and take a knee. Taking a knee has become a symbol of the Black Lives Matter movement. It was popularized by former San Francisco 49ers quarterback Colin Kaepernick, who began taking a knee during the national anthem with the blessing of a Green Beret soldier.

While little to no social distancing was observed, as is the case with most large protests in the country right now, nearly every single protester was observed wearing a face mask as the COVID-19 pandemic continues.