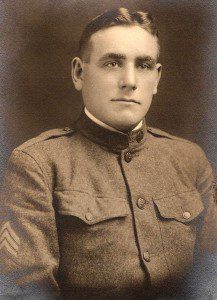 WESTFIELD – An effort to name a city park in memory of a war hero which began in 1929 came one step closer to success Monday evening when the city’s Parks and Recreation Commission gave it’s blessing to the endeavor.
The next step will be a public hearing, needed before the Council can take action, which is on the agenda for the City Council meeting Thursday evening.
An article in the March 28, 1929, issue of the Westfield Valley Herald reported that the munificent sum of $3,776, funds surplus to the needs of paying a $100 bonus to “the Massachusetts service men and women in the World war” and returned to the city, had been appropriated to build “the war memorial park at he Summit of Clay Hill.”
However, the Valley Herald reported in a Sept. 17, 1931 story that the naming process stalled when questions were raised about whether the authority to name city parks was vested in the City Council or in the Park Commission which had been established a few years earlier so a petition by the Apremont Post of the Veterans of Foreign Wars to name the park after one of Westfield’s favorite sons, Sgt. John Hussey, was not acted upon.
Hussey had been posthumously awarded the Distinguished Service Cross, the Army’s highest award for valor, for service with the 82nd Division of the American Expeditionary Forces, near St. Juvin, France during the World War.
The citation reports that, after his superior officers had become casualties, “Sergeant Hussey led his platoon forward with great bravery, under intense direct fire from a machine gun nest, being killed while in the attack.”
Recently, the city’s veteran’s agent, Bobby Callahan, brought the issue to the attention of the members of the VFW’s Apremont Post No. 1847 at the request of city residents Jack and Denise Quinn, descendents Hussey’s family.
Jack Quinn, Hussey’s great nephew, recalls that his mother, Mary Hussey Quinn of Hancock Street, mentioned her uncle when he was a child. He said she told him how, when she was a teen aged girl, there had been an effort to name a city park in honor of the Irish immigrant who moved to Westfield and lived with his brother on Kellogg Street before he went off to “The war to end war” and never came back.
Callahan said that, as a member of the VFW post, he brought the subject up at a meeting and the members at the meeting voted unanimously to ask the Veterans Council to request that the park be named in Hussey’s memory.
At the Veterans Council, comprised of representatives of the various veteran’s organizations in the city, the members voted unanimously at their May, 2012, meeting, “to endorse naming the park located at the intersection of Holyoke Road and North Elm Street, near the top of what is known as Clay Hill, Sergeant John Hussey Memorial Park.”
The chairman of the council, Lester Eldridge, then formally asked the City Council and the Westfield Parks and Recreation Commission to “take our endorsement, and Sergeant Hussesy’s service and sacrifice, into consideration when selecting a name for the referenced park.”
Kenneth Magarian, the chair of the Parks and Recreation Commission, said that he couldn’t understand why the issue has not been resolved sooner. “Why this wasn’t done when it first came up in the ‘20s or early ‘30s … is beyond me” he said.
Magarian said that a sub-committee of the commission met prior to the commission’s meeting Monday evening, and, after reviewing “some background and research information that (department staffers) Peg and Jim had dug up”, recommended unanimously that the full commission “name the park Sergeant John Hussey Memorial Park.”
And, when the commissioners acted on the question at the commission meeting later that evening, the commission voted, unanimously, to make that recommendation to the City Council.
City Councilor Christopher Crean of Ward Six, where the park is located, said that naming the park after Hussey was “a great idea” and said it was too bad the effort stalled when the question of jurisdiction was not resolved.
But, he said, “Now we’ve resolved it … and now we’ll get it done.”
He has called for Thursday’s public hearing which he said is required before the council can take action.
“We’ll do the public hearing and then we’ll go to committee” he said.
Once the council’s City Properties and Facilities sub-committee considers the question and reports back to the council, the City Council can take action to name the park, Crean said.