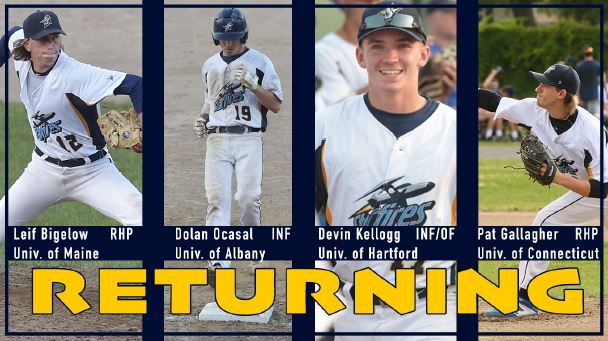 WESTFIELD – The Westfield Starfires continued to unveil the roster for the upcoming 2020 season earlier this week with the announcement of five players who will be returning to the team after being part of the organization’s inaugural season.
Infielders Devin Kellogg (University of Hartford) and Dolan Ocasal (University of Albany) will be reunited with pitchers Pat Gallagher (University of Connecticut), Leif Bigelow (University of Maine), and Zach Player (Eastern Connecticut State).
The group joins previously announced returners, Danny Crossen (Northeastern) and Chase Jeter (Sacred Heart).
Kellogg, a native of nearby Florence, comes back to Westfield after sharing the team lead in hits (51) with fellow returner, Danny Crossen, a season ago. Kellogg also was selected to the All-Star team in 2019.
Ocasal was a late addition last year and proved to be a useful asset around the diamond. He appeared in 27 games, logging innings at multiple positions while also posting a 0.00 ERA over three innings at the tail end of the season.
On the mound, Pat Gallagher and Leif Bigelow will look to replicate their contributions from last season. Gallagher, who won the Starfires Rookie of the Year Award, showcased flashes of dominance over 20 innings in 2019, posting a 2.70 ERA with 23 strikeouts.
Appearing primarily out of the bullpen, Leif Bigelow ranked third on the team in innings pitched with 39.2IP while posting a 4.54 ERA.
Zach Player made one start for the team last year before an injury shutdown his season. He will aim to build off his hot start in the shortened NCAA schedule this year where he began the season striking out nine batters over 7.3 innings pitched and not allowing an earned run against.
The Futures Collegiate Baseball League and the Westfield Starfires anticipate the release of their modified schedule in the coming days and are eager to provide the community with a safe, healthy, and enjoyable family experience in the weeks to come. – Courtesy of the Westfield Starfires