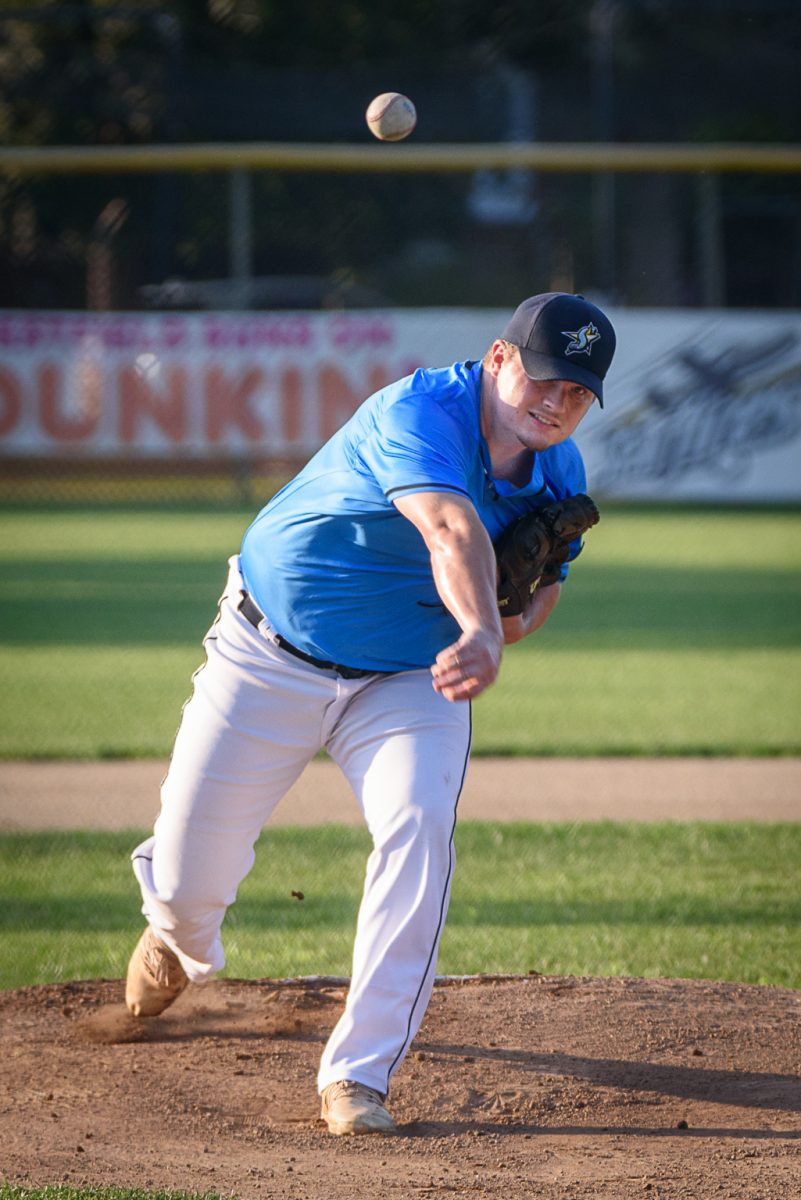 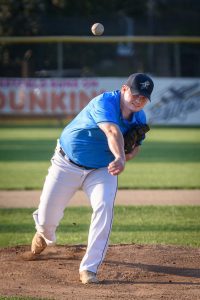 WESTFIELD – The Westfield Starfires season literally and figuratively ended with a bang – – thanks to an impressive fireworks display and an even more electrifying performance on the mound from a 6-foot, 1-inch righty from Mitchell College in New London, Conn.
Westfield Starfires pitcher Roland Thivierge, who hails from Portland, Conn., saved the best for last, tossing a no-hitter in a 10-0 shutout of the Norwich Sea Unicorns Friday night at Bullens Field to pull his team within a half-game of the Worcester Bravehearts for the final spot in the Futures Collegiate Baseball League playoffs. The Bravehearts shattered the Starfires playoff hopes though, destroying the Nashua Silver Knights 10-1 at Hanover Insurance Park at Fitton Field in Worcester.
“What an awesome way to go out,” Thivierge said. “(Westfield Starfires outfielder Cole) Bartels was the MVP, we got a couple of big names going, and it’s just an awesome team, an awesome place to play, an awesome league. …I couldn’t ask for a better team to do it with, a great way to end the summer.”
It was an awe-inspring outing for the Starfires pitcher.
Thivierge struck out 10 of the 22 batters he faced. Only one Norwich hitter reached base when Sea Unicorns’ Tyler Wells reached on a harmless one-out infield error in the second. The Starfires pitcher forced two straight ground outs to end the inning. That was the first and last batter to reach base for the Sea Unicorns.
“My fastball and curveball were great and I mixed in a couple of change-ups,” said Thivierge, admitting that nearly every pitch seemed to be working.
After the first pitch was thrown, scoreboard watching ensued.
6:35 p.m. – The night began on a positive note as Thiverge retired the first three batters of the game, the latter of which was a strikeout.
6:45 – The Starfires jumped out to the game’s first lead in the bottom of the first inning, knocking in two runs with Dougie Delacruz’s blistering run-scoring triple down the third base line and a RBI single from Sean Burychka.
6:58 – The Starfires triple their lead to 6-0 by jumping all over Norwich starting pitcher Luke Mathewson, hammering Mathewson for four runs in the second. The big hits in the inning included a Nolan Florence one-on, one-out double, a Hunter Pasqualini two-run double, and another RBI double (Burychka). A Norwich error on a double play attempt also resulted in a run. Things are looking up … although in Worcester the Bravehearts seize a quick 1-0 lead in the bottom of the first inning against the Nashua Silver Knights.
7:10 – Thiverge continues to dominate, retiring the side consecutively on strikeouts to maintain a 6-0 lead … meanwhile in Worcester the Bravehearts lead still remains at 1-0.
7:17 – It is seventh heaven for the hometown team in the Whip City in the third inning when the Starfires up their run total to seven with a sac-fly RBI from Pasqualini.
7:25 – The plot thickens as things take a turn in Worcester. Nashua ties up the ballgame, 1-1.
7:30 – Back at Bullens, Westfield continues to take care of business, taking an 8-0 lead on a RBI single from Trey Ciulla-Hall.
7:45 – In Worcester, Nashua loads the bases with one out but Bravehearts starting pitcher Alex Amalfi retires two straight batters to end the threat. The game is still tied 1-1. …In Westfield, Thivierge continues to dominate by striking out two batters, retiring his 12th, 13th, and 14th straight batters of the game in the sixth inning.
7:55 – Ten minutes later, Worcester jumps back out in front with one run in the fourth. …Westfield tacks on another run. Starfires lead 9-0.
8:15 – Westfield scores the clincher when Delacruz singles, moving Pasqualini around the bases. An error on the play allowed Pasqualini to score and end the game early. Celebration ensues with the ball players and fans all around the ballpark. Fireworks begin and end. The Starfires await the outcome of the Worcester game.
9:50 – Worcester defeats Nashua 10-1. The Starfires thrilling third season is officially over.
“We controlled our own destiny the whole week,” Westfield Starfires manager Tony Deshler said. “The fact that it did come down to the last day and we needed someone else to lose and for us to win to get in, we put ourselves in that spot. …I just told the guys it’s hard not to enjoy coming to the park. I just appreciated them pushing this all the way to the end.”
For the Westfield Starfires, it was another step in the right direction.
“It’s still an infant franchise but we’ve made some steps in the last few years,” Deshler said. “With the caliber of player we are bringing in, with just the day-to-day of how we are operating as a baseball program in general, I think has made a ton of strides. We just have a bunch of good dudes here who just enjoying coming. …I think that there’s just more to come.”