Dozens of students and their parents came to Westfield Intermediate School ahead of the new year to get to know the building better. (Photo by Peter Currier)

WESTFIELD- Incoming students to the Westfield Intermediate School received a tour of a building on Thursday and learned a little bit about how their day-to-day life in the school may look.

Greg Miller, assistant principal of WIS, introduced the kids and their parents to the school and some of the other staff. He noted that the school is still under maintenance, as is standard during the summer months.

Some of the school’s teachers were present on their own time to introduce themselves to their new students coming into the school. While students were touring the building and conducting a scavenger hunt, they were encouraged to search for their home rooms to possibly meet their teachers and get a sense of direction in the building.

Miller also gave information about buses and drop off locations for the different grades. Parents dropping off their students in the morning or picking them up later should follow the sign that reads, “parent drop off.”

Those students in fifth grade were broken up into eight teams labeled 51-58. Those numbers determine which part of the building the students should enter when they arrive in the morning. They also determine who each student’s teachers will be. 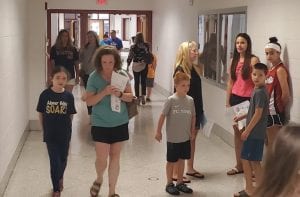 Each team consists of two teachers. One teacher focuses on STEM subjects such as math and science. The other teacher has a focus on humanities such as English and history. There is also one special education teacher with each team.

Miller noted that there will be staff and faculty standing at the entrances of the building on the first day to help anyone who is confused with the new building.

Students and parents were then released from the auditorium for the tour and scavenger hunt. The students were given a sheet of paper with the room numbers listed on them. The kids would have to correctly list all of the subjects that are going to be taught in each room to earn their first ‘polar points.’

The school uses a system called Positive Behavioral Integration System, through which they award students with “polar points” for good behavior. The points can be redeemed for various prizes.