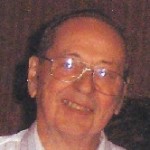 WESTFIELD – Joseph A. Hanechak, Sr., 71, passed away Saturday, March 1, 2014 in Noble Hospital, Westfield. Born and raised in Westfield, he was a lifelong resident and a graduate of Westfield Vocational High School.
He was a retired technician at the former Digital Corp. of Westfield. He served in the U.S. Air Force during the Cold War. Joseph was a jack-of-all-trades and enjoyed working with his hands. He built the home his family lived in and later a home for his daughter. He also enjoyed gardening, coin collecting, and loved traveling to Disney World.
He leaves his wife, Josephine (Kazimierczak); two daughters, Dianna T. Hanechak of Russell and Tina M. Muto and her husband Joseph of Westfield; four grandchildren, Christopher, Elizabeth, Natasha, and Antony. He was predeceased by his parents, John Sr. and Mary (Mirlovsik) and his brothers, John Jr. and Raymond Hanechak.
His funeral will be Thursday, March 6, 2014 at 9:30 a.m. from the Robert E Cusack Funeral Home, 94 Main Street (Route 20), followed by a Mass of Christian Burial at 10:30 a.m. in St. Peter and St. Casimir Church. Burial will follow in St. Mary’s Cemetery, all in Westfield. Visiting hours are Wednesday, March 5, 2014 from 5:00-7:00 p.m.