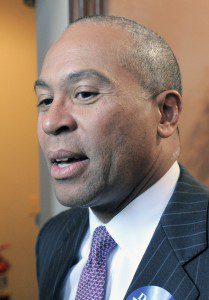 BOSTON (AP) — There was no need for the state to restart the selection process for medical marijuana dispensaries despite reports that some applicants may have provided false or misleading information, Gov. Deval Patrick said Monday.
None of the 20 applicants approved by the Department of Public Health so far has been granted an operating license, the governor told reporters, adding that applicants must verify all the information they have given to the state before any licenses are awarded.
“I don’t think we gain anything by starting over,” Patrick said. “We are in the middle of a process. Nobody has a license, no one is going to get a license until we meet the standards of the application process.”
House Speaker Robert DeLeo and Attorney General Martha Coakley are among those who have suggested the state should hit the reset button because it appears that applications were not properly vetted.
DeLeo said last month that he’d heard complaints from lawmakers and unsuccessful applicants about the process.
Media reports have pointed out various problems with some proposed dispensaries’ applications, including incomplete background checks, exaggerated resumes and misstatements about local support.
Patrick termed “frivolous” a lawsuit filed on behalf of one unsuccessful applicant.
A voter-approved state law allows for up to 35 facilities in Massachusetts to dispense marijuana to people with approved medical conditions, including cancer, AIDS and Parkinson’s disease.