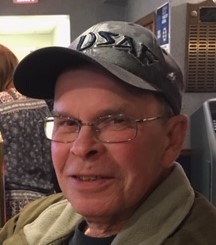 WESTFIELD – Joseph Hibert, 75, passed away on Tuesday February 19th surrounded by his family. He was born in Westfield, MA on March 20, 1943 to the late Joseph L. and Katherine F. Hibert.  Joe was a lifelong resident of Westfield and graduated from Westfield High in 1961. After graduating High School he joined the Air Force and spent six years in active duty and 27 years with the 104th Air National Guard retiring as Master Sergeant, Vehicle Operations NCO.  After serving active duty, in part, at Da Nang Air Base, Vietnam he was employed for 25 years with Sweet Life Foods. Joe then went on to work at Walmart in Westfield until recently. Joe was a past member of the Westfield Police Auxiliary, past member of the Junior Jaycees, Past President numerous times of the Fraternal Order of Eagles and an active member of the American Legion Post 124 in Westfield, where he had many friends.

Joe is survived by his wife Antoinette Hibert of 39 years; his brother Thomas Hibert and wife Laura of California; his son Steven Hibert and wife Shonda of Louisiana; his daughter Jodi (Hibert) Delgado and husband Aaron of California. He is predeceased by his son Joseph Hibert Jr. Joe also leaves behind his loving stepchildren Norman Robbins and wife Rene of Texas; Loretta Robbins and companion Glenn Mihalak of South Hadley, Patricia Wallinovich (Robbins) and fiancé Joseph Young of Florida; Dorothy (walker) Jones and husband Robert of California; Carrie (Walker) Egleston and husband Scott of Westfield and predeceased by Gary Allen Walker. He leaves grandsons Adam Hibert and Tyler Simoneau and many other grandchildren and great grandchildren who adored Grandpa. Calling hours will be held on Sunday, February 24th from 4-6 p.m. at the Firtion Adams Funeral Service, 76 Broad Street, Westfield, MA.  The Funeral will be held at the funeral home on Monday at 11 a.m. Burial will follow in St. Mary’s Cemetery. In lieu of flowers all donations to be made to the Renaissance Manor on Cabot, 279 Cabot Street, Holyoke, MA 01040. Firtionadams.com