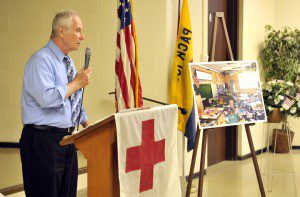 WESTFIELD – The Westfield Chapter of the American Red Cross conducted its annual meeting Monday night in St. John’s Lutheran Church as it has for the past 15 years.
However, this year that meeting location has a different feel, the feeling of home.
Rich Rubin, executive director of the Greater Westfield Red Cross Chapter, said the chapter is now a tenant of the church, a transition that began last month when the National Red Cross organization in Washington approved a four-year lease. The Red Cross is moving from the chapter house at 48 Broad Street, to the church located at 60 Broad Street.
“We’re mostly in St. John’s now,” Rubin said. “We’re not fully operational.  The office is not set up with telephones and computers, so we’re working out of both locations.”
Rubin said that the classes offered by the local chapter are ready to begin in the new classroom space at the church.
“The CPR class starts next week,” Rubin said.
Other programs, which require high technology, will be opened for enrollment later this month.
“It was a very emotional meeting,” Rubin said. “We have five members leaving and five new members of the Board of Directors. Doug Rossi will be our new chapter chairman.”
“It was also an eventful year with the tornado in June, the tropical in August and the freak snowstorm last October storm,” he said.  “It was a meeting with a lot of different facets, things that will strengthen the chapter here in Westfield.