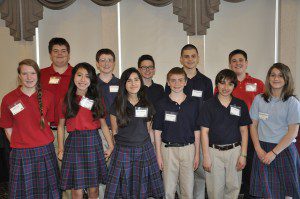 HOLYOKE – The smell of bacon, eggs and success permeated the air Friday morning at The Log Cabin Banquet and Meeting House in Holyoke, where around 150 people gathered to celebrate the legacy of Horace A. Moses, the founder of Junior Achievement, a national organization that has been working to prime America’s youth for economic success for almost a century.
Founded in 1919 in Springfield, Junior Achievement utilizes volunteers to increase the financial literacy and entrepreneurship wherewithal of it’s students, which number at 4.2 million in over 120 markets in the United States, and 6.5 million additional students in 119 countries around the globe.
Of these almost 11 million students, who range from kindergartners to high school seniors, many have gone on to achieve great success in a variety of fields. Such notable alumni include Millard Fuller, founder and president of Habitat for Humanity, Mark Cuban, founder of broadcast.com and owner of the Dallas Mavericks of the National Basketball Association, former CBS news anchor Dan Rather and former Pennsylvania Republican Senator Rick Santorum.
Al Kasper, President of Savage Arms on Springdale Road in Westfield, has been involved with the program since 1979 and has served on it’s board of directors for the past 15 years, chairing it twice. He says that the program is special in more ways than one. 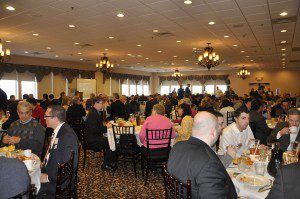 “It is one of the few charitable organizations that addresses the needs of students,” Kasper said, “It encourages  students to believe that if they do their work, they can achieve anything.”
Kasper also mentioned the work of veteran students who had been with the program long enough to become mentors for younger students, as well as the organization’s plethora of volunteers, many of whom are still students themselves, only now at local institutions of higher learning.
Jennifer Connolly, president of Junior Achievement’s western Massachusetts chapter, pointed out the organization’s impact.
“We serve over 9,000 students in 51 schools in 19 districts here (in western Massachusetts),” Connolly said, “Our volunteers gave over 55,000 hours last year, hours in which they would’ve earned about $1.5 million.”
As to the sorts of programs the volunteers are spearheading, Connolly brought up the “High School Heroes” program, in which Springfield high school students, trained by Junior Achievement, go into city elementary schools to work with students, planting the seeds for success. It is a program that Connolly believes is having a great impact on the young students (and their high school heroes) in the city which gave birth to this world-renowned organization.
“Springfield’s high school graduation rate is around 60 percent, but for students enrolled in our program, it is around 85 percent,” she said.
When asked of the percentages of volunteer ages, Connolly said 60 percent of volunteers are adults who are either retired or working in fields such as manufacturing and finance, while high school and college students make up about 20 percent each.
In the city of Westfield, the program is beginning to build strong ties in a similar manner to how it has aided Springfield, by working with students at Paper Mill and South Middle School. As Kasper points out, these programs only help to enhance the reputation of an organization that has flown under the radar over the years.
“We have the lowest overhead of any charity I know of,” Kasper said of the organization, which relies heavily on donations and support from local corporations, “and one of the few charities that hold complete accountability. We have the best teaching materials, the best volunteers. This area is full of students with lots of potential who don’t know how to get there yet. Junior Achievement is here to help them realize that potential.”
If you are interested in donating to and/or volunteering with Junior Achievement, visit their website at www.jawm.org