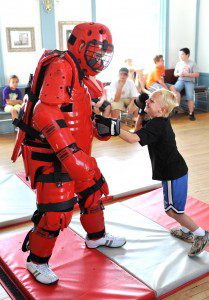 Granville Police Sgt. Patrick Winslow, left, dressed in a Redman training suit, battles Chad Hockenberry, of Granville, as part of the week-long Granville Junior Police Academy. Children learned how to use defensive tactics to ward off attackers, how to use police equipment, and  plenty of hands-on demonstrations. (Photo by chief photographer Frederick Gore)

GRANVILLE – The sixth annual Junior Police Academy began yesterday, with 21 young residents learning the ropes of police work.
The youth, in grades kindergarten through eight, are participating in the four-day academy at Town Hall, which culminates with the town-wide bike rodeo on the green Friday, Aug. 11 at 10 a.m. The public is welcome to join the rodeo, which is followed by a bike parade to the Gran Val Scoop.
Police Chief Jose Rivera led the class yesterday with Sgt. Patrick Winslow, who took a bit of a beating from the young cadets. Winslow donned the Redman suit during a lesson on tactical defense and the students kicked and punched him while learning how to defend themselves.
Rivera joked that it is the only time someone can beat up a police officer without repercussion.
“The academy is a lot of fun,” said Rivera. “It’s part of our community policing philosophy to reach out to the kids.”
Rivera and Winslow said a few of the students have already expressed an interest in becoming a police officer or another public servant. More than half of the participants are veterans of the academy.
Jodie Cahill, 12, and Mackenzie Sullivan, 11, both participated in the academy last year. Cahill said it was fun.
“It’s something different to do in the summer,” she said.
Sullivan said, that although she does not aspire to a life of police work, she wants to “use the Taser.”
Winslow laughed and said because Tasers are fairly new to Granville, there is a lot of interest in them.
“People want to know how to use them and what they can do,” said Winslow.
The department used to use community-policing grants to fund the free academy, but now it is a mostly volunteer effort.
“The grants stopped about three years ago,” said Rivera.
Even without the funding, Rivera said the department wants to keep the program free.
“Money is tight for a lot of people and we want to keep it at no cost,” he said.
Winslow said every day of the academy starts with the Pledge of Allegiance followed by physical fitness. Lessons throughout the week include defensive tactics, first aid, the Redman exercise, crime scene overview, dusting and sketching, and handcuffing, among others.
Winslow said every child receives a certificate of completion at the end of the week, which includes a small graduation ceremony.
Rivera said reaching out to residents while they are young helps foster a good relationship.
“They get to experience what police officers go through for training and it makes them more comfortable,” said Rivera.
“Some kids see police officers as unapproachable,” said Winslow. “This is a way to reach out.”
The academy is fun for both the participants, and the police.
“The officers enjoy it, and the kids like it,” Rivera said.