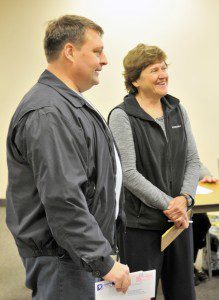 Westfield City Councilor Ward 1 Christopher Keefe, left, and former candidate for Ward 1 City Council Mary Ann Babinski prepare to witness a Ward 1 recount where Babinski lost to Keefe by 9 votes. The recount was staged under the supervision of Westfield City Clerk Karen Fanion and was open to the public. (Photo by Frederick Gore)

WESTFIELD – The Board of Registrars conducted a recount of the City Council Ward 1 ballots and declared incumbent Christopher Keefe as the elected ward councilor.
Mary Ann Babinski, who challenged Keefe for that Ward 1 council seat, requested the recount, performed by hand, after losing the Nov. 5 contest by just 11 votes.
That unofficial count, recorded by the polling computers, gave Keefe a total of 777 ballots to Babinski’s 766 votes. There were 146 blank ward ballots and three write-in votes.
The Board of Registrars conducted a hand-recount Friday morning. Keefe’s number remained the same, but Babinski gained two votes, bring her tally to 768, still short of the number needed to unseat Keefe.
City Clerk Karen Fanion said “everything went smoothly” during the recount which took an hour and 45 minutes to complete. The board then voted to declare Keefe the official Ward 1 city council seat winner.
Fanion said that during her tenure as City Clerk there was a recount in 2005 for the Ward 5 Council seat when Edward Ziskowski challenged incumbent Richard E. Onofrey Jr. That recount also did not change the outcome of the contested seat. 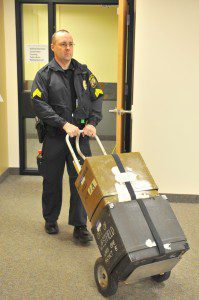 Westfield Police Sgt. Rob Saunders carries in the Westfield Ward 1 ballots that were sealed moments after the election. (Photo by Frederick Gore)

Prior to the recount Keefe said that Babinski was justified in requesting the recount because of the narrow gap separating the two candidates and the fact that nearly half of the ward voters had cast their ballots in support of each candidate who were separated by a margin of .0065 percent.
Keefe, speaking after being declared the winner said that the biggest winners are the residents of Ward 1 because of the democratic exercise to ensure the integrity of the voting process.

“The other big winners are the Board of Registrars and the City Clerk’s office because the recount validated the accuracy of the polling computers and there was such a small change in the voting tally,” Keefe said.
“People have been using those machines for more than a quarter of a century and know how to properly fill out a ballot,” Keefe said, adding that he had not anticipated a significant shift in the vote tally coming out of the hand recount because of the accuracy of the computers.
Babinski said that she was encouraged to seek the recount by supporters of her campaign.
“I know in some communities that (narrow) difference in the vote would have triggered an automatic recount,” Babinski said. “I got phone calls from people who wanted me to do a recount.”
“The raw vote was so close it justified seeking a recount,” she said, “And i did pick up two votes.
“My disappointment is only that I could not get into a position to give voice to the people of Ward 1,” Babinski said. “I have been working and fighting for them for the past five years. It was good to be part of the political process.”