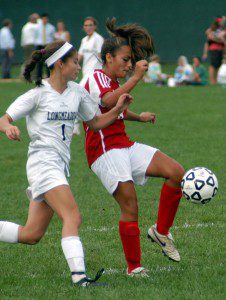 LONGMEADOW – Westfield High girls’ soccer junior forward Caroline Senecal said her younger sister used to have a hard time pronouncing Caroline’s name, thus, the moniker “Kiki” was born. After yesterday’s season opener, Longmeadow players will have a hard trying to forget.
Senecal scored two goals, including the game’s first, to lead visiting Westfield past Longmeadow 3-0.
Lindsay Stefano set up the first score in the 11th minute, delivering a cross pass. Senecal ran to the near post and drove the ball into the net past Longmeadow goalie Brittany Famiglietti for a 1-0 lead.
“It was really, really important,” Senecal said about striking first. “We had to come out hard to show them who we are. We had to find the through-holes and make those long balls.”
Senecal later scored on a pass from Julianne Sharon, collecting the ball in the top corner of the penalty box and floating a ball into the net.
Sandwiched in between Senecal’s two scores was a goal from Catherine Colapietro. Colapietro settled a pass from McKenzie Saltmarsh near the side of the penalty box and struck the upper reaches of the opposite corner of the net with 9:31 remaining in the first half.
“We’ve been working a lot on organization,” Westfield coach Keith Saltmarsh said. “The girls really put it together.”
Saltmarsh said the game plan nearly worked to perfection.
“We cut off their attack fairly early, we defended well – we kept the ball in front, and we changed the point of attack quickly, especially on the corner.”
Westfield clamped down on Longmeadow from the outset, bottling up towering Longmeadow midfielder Chandler Syocourka, keeping the strong ball-handler from launching a successful run.
The Lancers had a few more opportunities in the second half after both teams settled in, but Westfield goalie Celina Nunez stepped up to the task. Nunez made a key diving save in the 44th minute.
Westfield responded with a quick offensive drive less than two minutes later, only to be turned away. A half-minute later, Syocourka put a hard foot on the ball, but Nunez came up with another save.
Two minutes later, Senecal scored the team’s combined hat trick.
Nunez and Westfield first-half goalie Amelia Tooker combined for four saves. Famiglietti and Allison Mishol finished with nine totatl saves for Longmeadow.
Coach Saltmarsh said he was impressed by the contributions of some first-time varsity players as well.
“I’m really pleased with our effort,” he said.