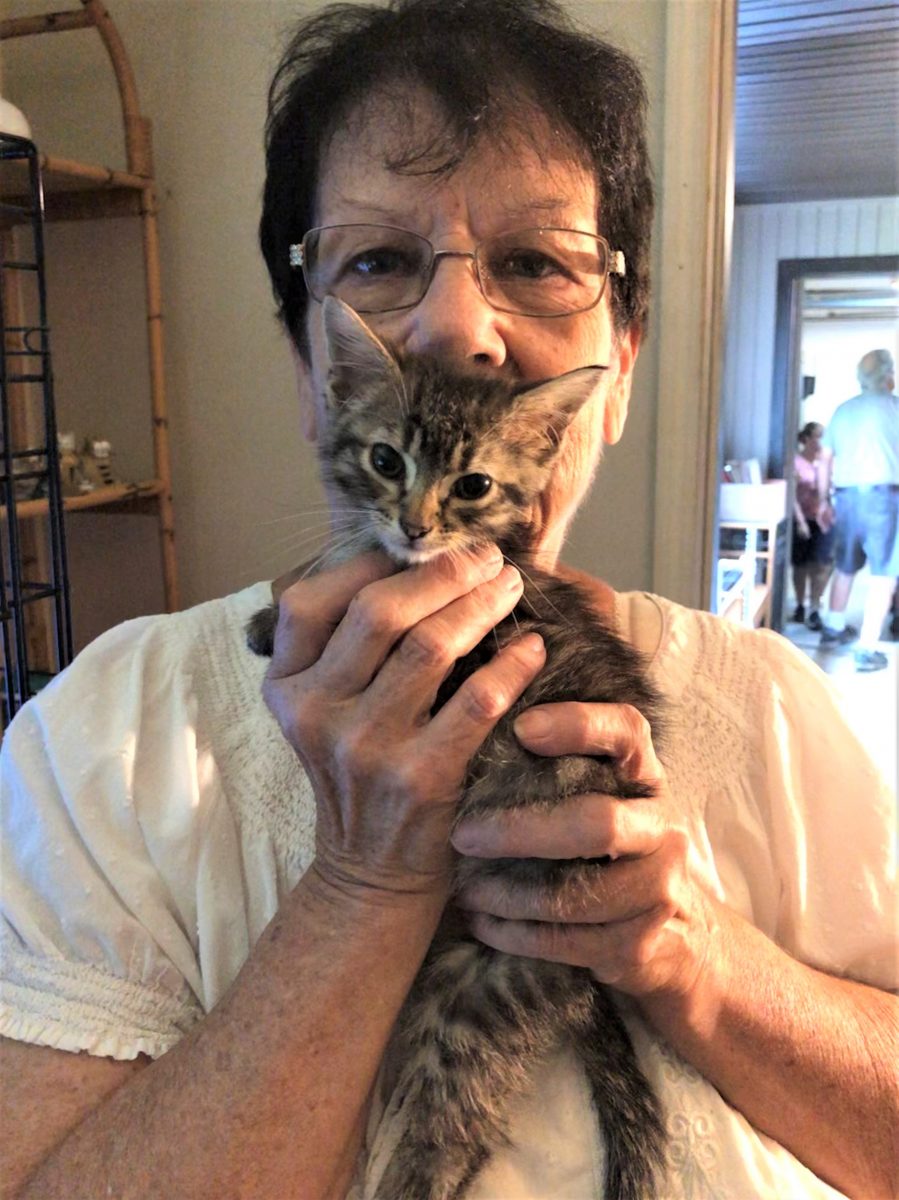 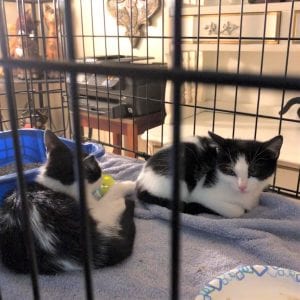 Bonded brothers “Prince Archie” and “Billy” who were up for adoption at Saturday’s clinic. Photos of cats up for adoption may be found on WHCP Facebook page at Westfield Homeless Cat Project. (Photo by Amy Porter)

WESTFIELD – Denise Sinico, founder and director of the Westfield Homeless Cat Project (WHCP) at 1125 East Mountain Road has announced that kitten season has arrived.
“While August might be considered the `dog days of summer,’ it is officially `kitten season’ here at WHCP. We are filled to the brim with adult cats and kittens,” Sinico said.
WHCP is a non-profit 501(c)(3) cat rescue based in Westfield, approved and registered with the Massachusetts Department of Agriculture. Sinico said all of their cats are rescues that have been abandoned, abused, surrendered, or just simply left to die. WHCP is a no-kill rescue and does not discriminate against age or illness.
The cats and kittens at the rescue are up for adoption. WHCP holds adoption clinic hours at the East Mountain Road facility on Thursdays from 5-7 p.m., Fridays from 1-3 p.m., Saturdays from 11 a.m. to 3 p.m. and Sundays from 1-3 p.m.
Adoption coordinators Rebecca Swords and Allen Hall were handling inquiries at Saturday’s adoption clinic. Swords said adult cats are kept on the premises, while kittens and pregnant cats are kept in foster care until they are ready to adopt. 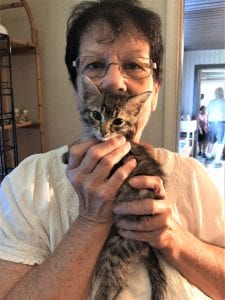 Frosty Robbins, who is currently fostering 14 pregnant cats and kittens, with “Riley,” who was just dropped off that morning by the Southampton Police Department. “Looks like I have one more,” she said. (Photo by Amy Porter)

Frosty Robbins, who is currently fostering 14 pregnant cats and kittens, was holding a kitten named ‘Riley,’ who the Southampton Police Department had dropped off earlier that day. The kitten had come in covered with fleas, and had just had a bath, before Robbins took her home. Kittens are fostered until they grow to be more than two pounds and can be spayed or neutered.
A bonded pair of black and white male kittens, “Prince Archie” and “Billy,” was ready for adoption at the shelter. Robbins said black and white kittens are the hardest to adopt out. Several of the adult cats in the shelter on Saturday waiting for adoption were also black and white; all of them friendly, and looking for homes.
Adoptive families must fill out an application and, if approved, can bring home a cat or kitten on that day. Questions on the application include what other pets are in the home, whether the cat will be indoors or outdoors, and whether there are plans for declawing.
Swords said a couple was turned away earlier in the day because they had plans to declaw the cat. Currently, there is legislation in the statehouse to ban the practice, which is considered inhumane (see related story).
All of the cats up for adoption are totally vetted, up to date on vaccinations, neutered or spayed, tested for common cat diseases, and treated for parasites. Veterinarians Sinico works with include Hazel Holman at the Blandford Animal Hospital, Robert Shurtliff at the Eastfield Hospital for Animals, and Penny Peck at the Hampden Veterinary Clinic. 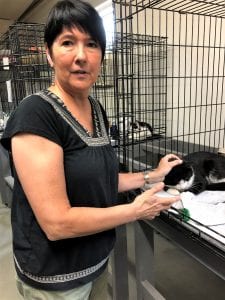 Adoption Coordinator Rebecca Swords, pictured with a yet unnamed male cat, has fostered 300 cats over the years. “I don’t have a problem parting with them now. There are always more waiting to come in. Sometimes I get Christmas cards from adoptions I did years ago,” she said. (Photo by Amy Porter)

While most of the cats were household pets that have been abandoned, occasionally, they do get in feral cats, and try to place them in a barn or warehouse situation. “We can’t adopt them to families, of course,” Swords said.
The adoption fee for cats and kittens ranges from $100 for an adult cat over one year old up to $350. Sinico said they do give discounts on young kittens if people want to adopt two. “Sometimes we have adoption marathons and adopt out for $50 to $175, depending on how many cats and or kittens we have, so prices can vary,” explained Sinico.
She said WHCP takes in and adopts out hundreds of cats and kittens per year. They get no funding from the city, but rely on adoption fees and donations to keep it going. She said they spend on average $2,000 a month for food.
Sinico said they are in desperate need of more foster homes, and have an urgent need for monetary donations and supplies of cat litter, KMR, Gerber chicken-flavored baby food, canned Friskies or Fancy Feast wet food, and dry kitten food, as well as paper towels, laundry detergent and disinfectant wipes. Donated items may be dropped off any time at 1124 East Mountain Road.
They are also seeking volunteers to launder cat beds, towels and blankets and assist at canned food drives and tag sales held throughout the summer months. Anyone with questions about the adoption process, kitten availability, or volunteer opportunities may contact her at [email protected] 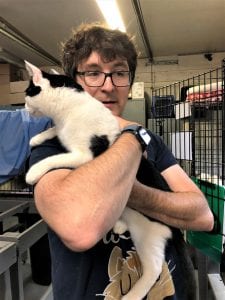 Adoption coordinator Allen Hall with “Louie.” Hall, who also does fundraising and photography for WHCP, has adopted eight cats himself. (Photo by Amy Porter)

Started in 2006, WHCP received non-profit status in 2007. Sinico, who said she did not consider herself a “cat person,” blames the city of Westfield for getting her started on the project.
She said a friend at the time told her that kittens were getting caught up in the tractors in the Department of Public Works yard. She went down to investigate, and discovered that there were 30 to 40 feral cats in the yard that the employees were feeding. She said while there she met Debra Labruzzo, who had a trap and release (TNR) clinic, where she would pick up the strays, get them fixed and checked out, and release them.
Sinico started helping Labruzzo, spent $500 on traps, and went every month. She finally started WHCP after she met a man dropping off his daughter’s cat and three kittens at the yard, because she couldn’t keep them anymore. The next day, Sinico checked in with the shelter who had taken them, and learned they had been euthanized. She was devastated.
Sinico quit her job and built a shelter in her back yard. “I still help people with ferals when it’s needed, but mostly take in homeless, surrendered cats and kittens,” she said.
Around that same time, plans for the Westfield Regional Animal Shelter were also started, thanks to the efforts of Westfield resident Ken Frazier and Police Capt. Michael McCabe. “Mike McCabe and Ken Frazier were the reasons we got the animal shelter up and running. We have those two men to thank,” Sinico said.
“Well let’s just put it this way; cats needed the help, there was no one doing what I was doing so I decided to make a difference in our town. If I didn’t come across that situation at the DPW yard, I probably wouldn’t have been doing this. I made a decision. I quit my job back then — 13 years ago–  and have since rescued several thousands of cats and found them homes. You could say the cats are in my blood. It costs a small fortune to do what we do, but I have great volunteers that are dedicated to the work, and it’s because of them I can do what we do here,” Sinico said.