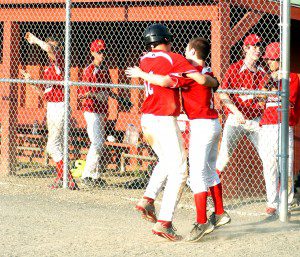 Jake Colapietro hit a bases-loaded sac-fly in the top of the seventh to score J.D. Huntley for the game-winner.

Huntley reached on a line drive to start the inning, Matt Hannoush reached on an error when two outfielders collided attempting to catch a booming fly ball, and Sam Brochetti loaded the bases on a single. Colapietro delivered in the clutch.

Cortina Tile’s John Murray reached to lead off the bottom half of the final inning, moved to second on a ground out, and advanced to third on a passed ball as the opposition attempted to mount a comeback. But Kiwanis reliever, Brochetti struck out the next two batters to end the game and leave Murray stranded at third.

Kiwanis, who entered the game with an 0-1 postseason record, took the early lead 2-0 before Cortina rallied. Still, they stuck with it and pulled it out at the end.

Ari Schwartz was the tough-luck pitcher for Cortina Tile, striking out six batters and scattering six hits in seven complete innings. He walked just one.

The heat sure didn’t drain ITI of its recent power surge.

ITI advanced to Saturday’s championship after scoring its 75th run through its last five games.

ITI, who entered the postseason with a record of 11-9, broke open the game with an 11-run fourth inning.