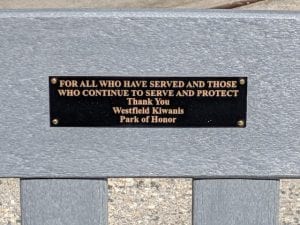 The Westfield Kiwanis Club donated a memorial bench that bears this plaque at the Veteran’s Memorial in Stanley Park. (KELLIE BROWN PHOTO)

WESTFIELD – The Kiwanis Club of Westfield is hosting a ceremony May 13 at Stanley Park to dedicate a Veteran’s Memorial bench.

Kiwanis members invite the public to attend the brief 5:30 p.m. ceremony near the Veteran’s Memorial in the park.

Funds raised from the Park of Honor were used to purchase the bench. Kiwanis annually hosts its Park of Honor – a sea of American flags displayed in front of Westfield Middle School – to raise funds for families.

“We sell flags in September to honor all who serve and protect,” said Kiwanis member Kellie Brown, director of operations for the Boys and Girls Club of Greater Westfield. “Traditionally we give the funds back to families for summer programming but due to the pandemic we were not able to do that this past summer. So, we decided we would honor all those who serve and protect both present and past with a bench in Stanley Park as a remembrance from the Club how much we appreciate all those who serve.”

Brown said she “also felt it would be a great way for those in the community that help by purchasing a flag to know they had a hand in making this happen.”

This bench honors all veterans, but Brown said a special intention is to remember the lives of those that passed of Covid-19 at the Soldiers’ Home at Holyoke. 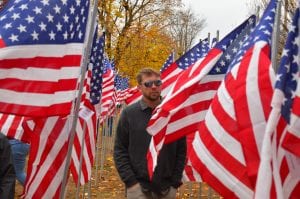 Chris Burke wanders through the rows of American flags in the Kiwanis Park of Honor in 2019. (PETER CURRIER/THE WESTFIELD NEWS)

Kiwanis Past President Frank Sposito contacted Stanley Park to arrange the bench donation and worked with Stanley Park Managing Director Robert McKean who said “Our sincere thank you to the Kiwanis Club for paying honor to the true heroes and real patriots of our country.”

This event is open to all and social distance guidelines will be followed. It is going to be a brief dedication with a 21-gun salute by the Westfield American Legion Post 124.  a

Brown thanked those who contributed.

“I just want to reiterate that this was made possible by everyone who helps by purchasing a flag for the Park of Honor,” said Brown. “Flags will go on sale in late September for $35 each and anyone can purchase one or more to honor someone who is military, police, fire, first responder, sheriff’s department, or any other law enforcement or service field.”