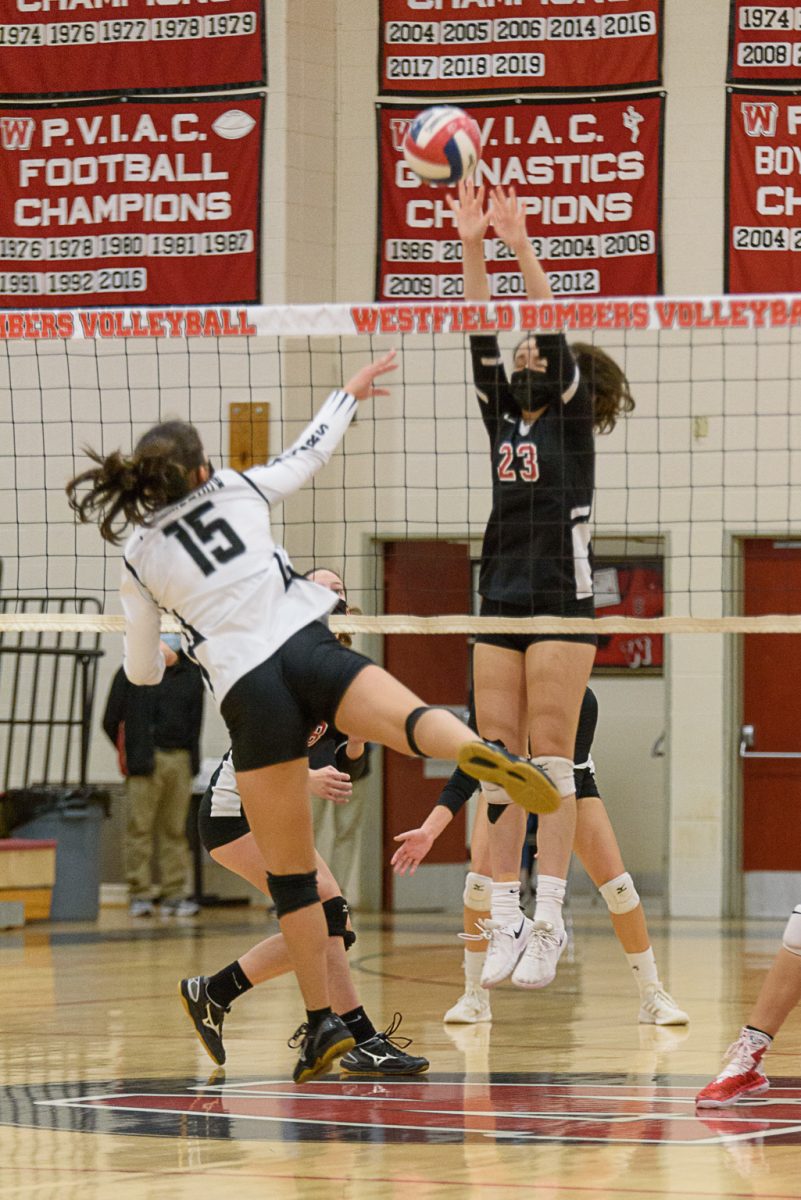 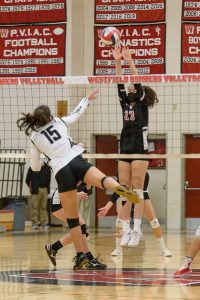 WESTFIELD – It was an amazing come-from-behind victory for one team and a heartbreaking loss for another.
Longmeadow senior outside hitter Laura Griffiths landed 21 kills and the No. 4 Lancers rallied from a two-sets-to-none deficit to stun the top-seeded Westfield Bombers in five sets in the PVIAC Class A Girls Volleyball semifinals Thursday night, 17-25, 20-25, 25-23, 25-14, 15-11.
“Volleyball you’ve got to win three sets,” Westfield boys volleyball coach Tyler Wingate said. “We were close to getting it done but that’s the harsh reality sometimes when you don’t close out an opponent. Give them a lot of credit – – they made it really tough for us. They played outstanding defense and they brought the offense today too. Their hitters were tough to stop.”
Longmeadow’s fiery sparkplug was nearly unstoppable when she got rolling.
Griffiths almost single-handedly willed Longmeadow to a victory, sparking an emotional 2-point victory in the third set; fueling a convincing win in the fourth set with eight over-the-top kills, including three straight to spur a 5-0 start; and, landing three kills in the decisive fifth set to cap off an inspirational showing.
“We knew they were going to be such a challenge. We’ve played them already; we’ve gotten our butts whipped by them before,” said Griffiths, referring to the regular season sweep by Westfield, a pair of 3-0 wins. “We just finally put all the pieces together.”
While the ending may have been bitter for Westfield, it sure was sweet early.
Westfield opened with a team effort in every sense of the word. The Bombers contributed from just about every angle of the court and every position.
Lauren Carnes (10 kills) and Emma Petzold (15 kills) delivered kills right out the gate for Westfield. The Bombers built an early seven-point advantage, 10-3, but Longmeadow rallied twice to within one point of tie.
Westfield regained a sizeable lead and with two kills from Livia Ciubotaru (15 kills) and one from Aylei Connolly, the Bombers managed to easily secure the first set.
Longmeadow enjoyed a lead for a good portion of the second set – – they led by as many as seven points – – but Westfield rallied. Kaitlin Price (7 aces) had two straight aces to cut the deficit to four, 16-12. Petzold delivered a kill to pull within one point of a tie, 17-16. A wicked spike from Petzold resulted in a tie. Then, Petzold struck again, extending her arms for a block and an 18-17 lead. The Bombers would not trail again in the frame.
Westfield took the first lead in the third set but never led by more than three. Midway through the set, Griffiths began her heroic climb to unforeseen heights inside the Bombers gymnasium. After 10 ties and five lead changes, Longmeadow landed the first of three crushing blows, a 25-23 victory.
The rest came in one fell swoop at the hands of Griffith.
Griffith recorded eight kills in the fourth set alone, bringing the visiting crowd to a roar. The momentum, having swung about 180 degrees in the other direction, carried over into the final set.
Westfield managed a 2-1 lead early but fell behind and could not reclaim any type of edge. Longmeadow senior captain Maria Mishol collected consecutive aces to go up 11-8. Anna Gorfinkel mustered two kills, one to make it 14-11 and another to clinch the shocking come-from-behind victory.
Westfield’s Abby Menzel finished with 41 assists.

GIRLS SOCCER
Saints end regular season on high note; await state fate
St. Mary’s 2, Central 1
Aiden Levesque blasted home the game-winner on a feed from Allie Goodreau with six minutes remaining in regulation, lifting St. Mary’s to a thrilling victory.
“This was a huge win for the program,” St. Mary’s girls soccer coach Patrick Olearcek said. “Obviously Central is a huge school with lots of athletic players but we hung in there and made the plays at the right time and really came away with a fantastic win.”
St. Mary’s Emma Goodreau opened the scoring with a beautiful direct kick from outside the box before Central tied it. Saints goalie Amelia Willenborg was perfect the rest of the way, finishing with 20 saves.
Macy Woodger, Lillian Nadler, Jess Armstrong, Tori Smith, Emma Bialas, and Kailyn Cabrini held Central at bay.
“(I am) just so proud of the girls for the 15 wins this year to finish the regular season on this note leaves us with a very positive feeling as we head into the state tournament next week,” coach Olearcek said.
St. Mary’s finishes the regular season 15-3.

BOYS SOCCER
Tigers cap off unbeaten season
Westfield Technical Academy 2, Monson 0
Adam Strycharz and Jon Vella each scored a goal to help Westfield Technical Academy complete an unbeaten regular season at 15-0-3. Tigers goalie Liviu Mocanu made an amazing save in the first five minutes and finished with a shutout in net at Granite Valley School’s Moriarty Field.
“We are still dazed and confused about not being able to play in the Western Mass tournament,” Westfield Technical Academy boys soccer coach Kyle Dulude said. “Our win today versus Monson just shows our love for the game and our ability to just play for ourselves and make the most of the time we spend together. Everyone played for each other today.”