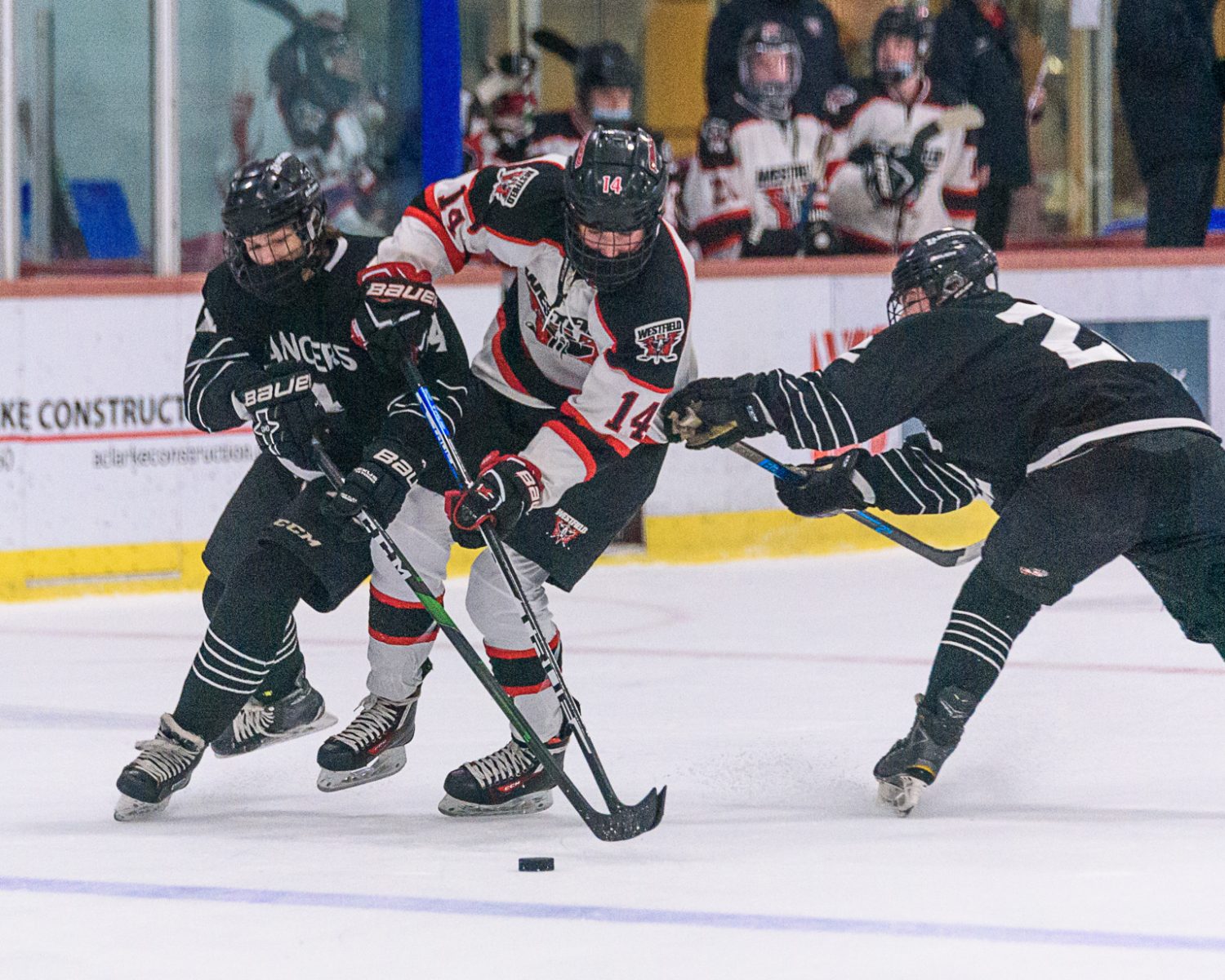 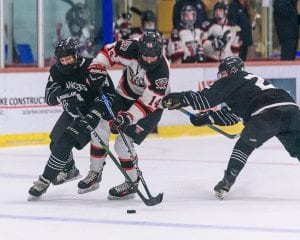 WESTFIELD – The ice skating rink inside Amelia Park Arena bears the logos of the Westfield Bombers, Southwick Rams, Westfield State Owls, and Westfield Youth Hockey League’s Junior Bombers and their banners hang high above on the rafters, but for one night of hockey Wednesday this house belonged to the Longmeadow Lancers.
Six different Longmeadow boys ice hockey players scored as the Lancers spoiled hockey night in the Whip City with a 7-2 win over the Westfield Bombers.
“I just think they wanted it more than we did,” Westfield first-year head coach David Pelletier said. “We had times where we worked hard and worked smart. We just didn’t do it consistently enough.”
It looked promising for Westfield (1-1-1) early in the contest. Less than two minutes into the first half, Bombers’ Nathan Sarabaez chipped in a short rebound deep in the crease for a 1-0 advantage. Connor FItzgerald and Dan Bennett each received credited for an assist.
Westfield’s lead quickly evaporated though. Longmeadow punched in three goals in a 5-minute span, scoring a game-tying goal with 17:26 remaining in the first half, slipping a go-ahead goal into the net three minutes later, and tallying another score two minutes after that.
“We came out, scored first and then kind of just fell back and let them gain momentum,” coach Pelletier said. “We had an opportunity to just keep the pedal down, and took the pedal off.
Under siege, Westfield’s defense fought back, successfully killing off a Longmeadow power play. Bombers goalie C.J. Czarnecki made a point blank save and deflected a shot as time expired on the Lancers power play opportunity.
Longmeadow kept up the pressure and made good on its next power play chance as time ticked closer to the half. The Lancers centered the puck near the blue line, passed it on to the right wing, crossed it to the left wing, before a slap shot sent the puck into the back of the net with 4:08 left in the half for a 4-1 lead.
Westfield came out with a renewed purpose in the second half. The Bombers went on a power play with 16:15 remaining in the game, peppering the Longmeadow net with four shots. The Lancers came up with four saves, and essentially salted the game away.
Longmeadow scored on a rebound with 9:20 remaining in regulation. Westfield’s Kevin Hosmer responded with a goal a minute later – – Fitzgerald and Joe Taupier assisted – – before the Lancers tallied two goals in the closing minutes.
“This is our biggest rival; we love to hate each other,” coach Pelletier said. “The coaches are friends. There’s players that are friends with each other but when the game starts, it’s a battle. …It wasn’t any one individual. They got a couple fluke calls – – I would call them. You got to be able to fight through that adversity. Bad things happen to good teams. You just can’t let those things beat you. You just can’t look at the scoreboard. You’ve got to go out every shift and earn it.”
Despite suffering a defeat to their longtime rival, the Bombers head coach remained upbeat.
“We got them again twice,” coach Pelletier said. “We’re going to get better. I’m comfortable knowing that these guys are capable of doing all the right things. …We’ll learn a lot from this one. They’ll get better.”
With several programs sidelined due the coronavirus, Pelletier said every moment has be savored, whether the end result is a win, loss, or tie.
“We’re counting our blessings,” coach Pelletier said. “For lack of a better term, we’re skating on thin ice because tomorrow, you just don’t know. Enjoy every shift because tomorrow it could end. Just bring it, bring it every shift like it’s your last shift because tomorrow you might not play.”