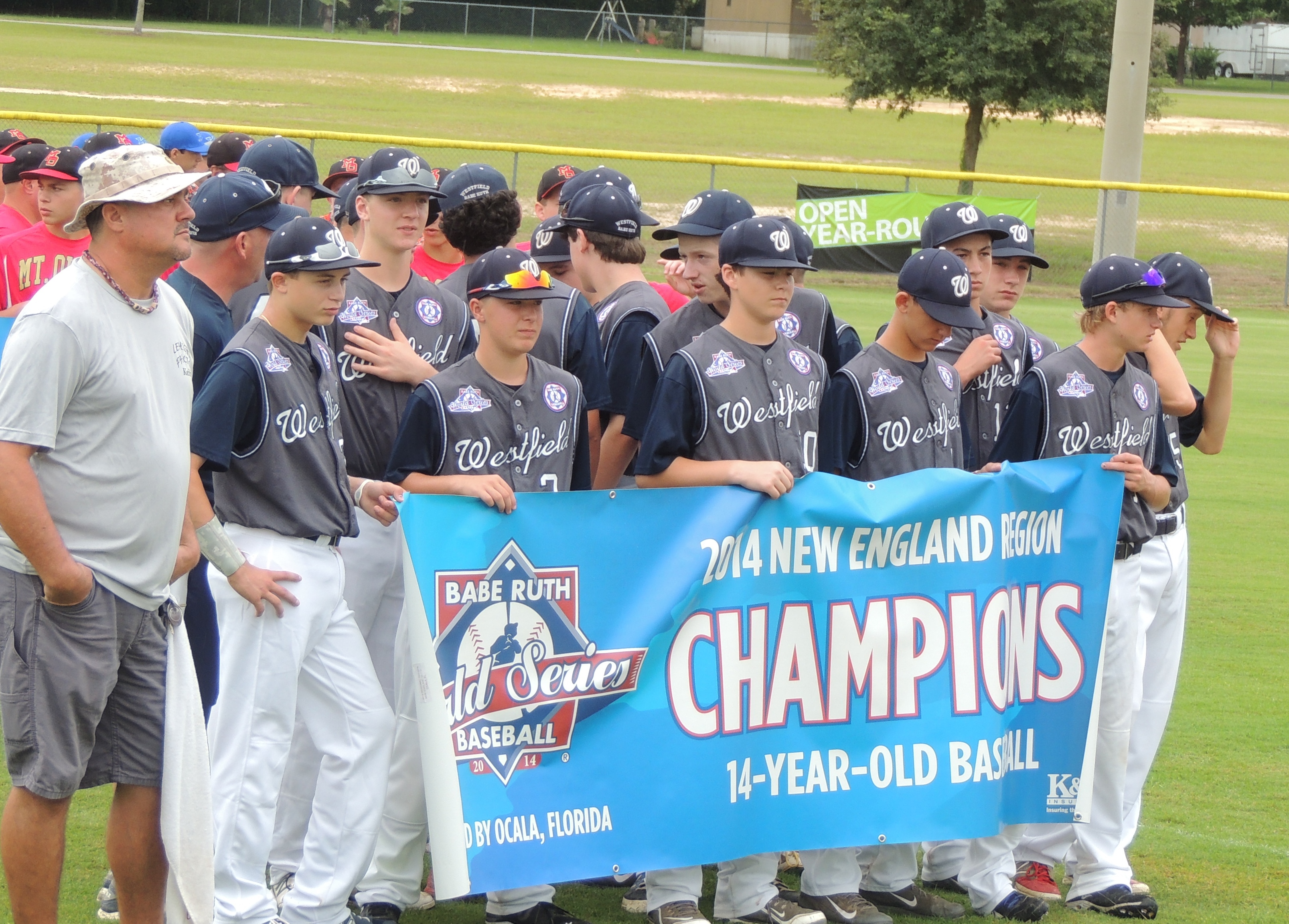 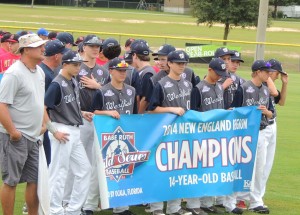 OCALA, FLA. – The lights went out at the Babe Ruth Baseball 14-Year-Old World Series Monday night. They also went out for Westfield’s team of All-Stars.
Sarasota (Fla.) put together some timely hits and held Westfield to just three hits in a 10-6 win over the Whip City in Game 3 of the World Series.
Westfield, which fell to 0-3, was officially eliminated from the championship round.
It was a long night for players and coaching staffs for both teams, as well as parents and fans. The start of Monday’s game was delayed nearly 90 minutes due to a longer-than-expected series of games played throughout the day. The game was also halted for about a 15-minute period in the second inning when some of the lights went out at the stadium.
“It was a long night in more ways than one,” Westfield manager John Bonini said.
Sarasota seized the game’s first lead. Robert Vassallo lofted a one-out double to left field in the top of the first inning. An infield error and a fielder’s choice resulted in a 1-0 advantage.
It was the third straight World Series game that the Whip City trailed from the outset, but true to form, Westfield rallied to tie the game 1-1. Matt Masciadrelli opened up by reaching on an error. Back-to-back walks from Aidan Dunn and Mitchell Longley loaded the bases. Tyler Delgado managed to put the ball in play with one out, resulting in a fielder’s choice and the team’s first run. A strikeout ended the inning.
The home state squad stormed back.
In the top of the third inning, Christian Diaz led off with a walk and Robert Vassallo singled. Three consecutive RBI singles – from Seth Shore, Shane Rexford, and Stephen Wilmer – put Sarasota out in front 4-1. Chase Doyle’s sac-fly made it 5-1.
Westfield responded.
Walks from Masciadrelli and Longley, sandwiched around a Dunn hit-by-pitch loaded the bases. Jack Yvon followed with a run-scoring walk. Delgado followed with a liner to center field for two runs. An infield error gave the Whip City new life at 5-all.
The tug-of-war continued.

Sarasota reached on two consecutive errors to start the fourth inning, the second of which resulted in another lead change, 6-5. A walk, a run-scoring single from Vassallo, and Shore’s two-run line drive to center field increased Florida’s lead to 9-5.
No. 10 batter Joshua Eslinger manufactured another run for Sarasota in the fifth, drawing a two-out walk, stealing second base, and scoring on a hard hit ball to center field from Diaz.
Sarasota threatened to widen the gap even further, but Westfield silenced the attack.
In the sixth, Shore walked and stole second, but was thrown out at third base. Tyler Delgado applied the tag. Rexford walked, and attempted to steal second but was thrown out. Bonini completed the play. A strikeout ended the inning.
Westfield scraped back a run in the bottom half of the sixth. Yvon singled, advanced to third on a double from Delgado, and scored on a fielder’s choice. Sarasota led 10-6.
Sarasota pitcher Evan Berman, who provided 4 2-3 innings of one-run ball, retired the side in the bottom of the seventh to end the game. Berman struck out four batters and walked three.
Florida’s starting pitcher Stephen Wilmer allowed five runs (3 earned) on no hits and three walks, lasting just 2 1-3 innings.
“We made some mistakes defensively,” manager Bonini said. “We gave them some runs. When you play at this level, you can’t make mistakes. You can’t give away outs. Here they’re magnified.”
Despite the loss, Westfield pitchers Kyle Roberts (2 inn., 0 hits, 2 walks, 0 runs, 1 K) and Aidan Dunn (1 2-3 inn., 2 hits, 3 walks, 1 run) were steady in relief.
Westfield will close out its World Series run with its final game in pool play against Southeast Lexington, Kentucky Tuesday at 5 p.m.