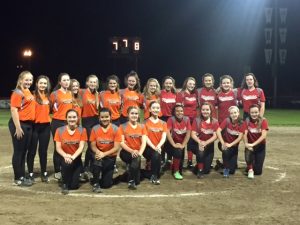 Richard’s Grinders and Carpet Wizard, both pictured above, played the first Little League softball game, a 14U contest, under the newly-installed lights at Sadie Knox Field. (Submitted photo)

10u softball
Game Date: 5/17/19
Moe’s Westfield 14, Easthampton 4
Sara LaCross got her first Little League hit while Mia Tavares, Grace Burke, and Allie Stucenski were on base all four at-bats to pace Moe’s Westfield to a 14-4 win in Easthampton at Nonotuck Park. Stucenski got her first-ever extra base hit when she led off the fourth inning with a triple. She also had two singles. Tavares had a double and two singles and Burke had a single as well as two excellent scoreless innings on the mound. Nathalie Senez had two singles and two runs batted in. Aliyana Lapoint also had two singles and Caitlyn Arooth had a single as well. Camille Bruno had two bases loaded walks and pitched a scoreless inning as well. Katelyn Connor and Nova Santiago Scott also reached base as well as Moe’s picked up a win on the road to go to 5-0 on the season.

Game Date: 5/19/17
Moe’s Westfield 17, Hadley 8
Grace Burke, Mia Tavares, Allie Stucenski, and Nathalie Senez led the offensive attack as Moe’s remained unbeaten with a 17-8 road win in Hadley at Hopkins Academy. Tavares had a double, 3 hits, 6 steals and 4 runs scored. Burke had a triple, 3 hits, 2 RBI and a steal of home. Stucenski pounded a double, 2 hits, 2 walks and 4 RBI while Senez had two hits and 4 RBI. Burke and Tavares also pitched easy scoreless innings for Moe’s as well. Camille Bruno also had a hit and two RBI and Sara LaCross walked four times and scored four runs including a steal of home. Caitlyn Arooth also had a bases loaded walk for Moe’s. Moe’s jumped ahead of Hadley quickly and never looked back in route to their sixth win of the year.

Game Date: 5/20/17
Kiwanis 12, Southampton 10
The Kiwanis won another close game over Southampton. The Kiwanis came from behind with 4 runs in the 4th to take the lead and held on from there. The trio of Hayley Krupienski, Rachel Bonfitto and Shea Hurley all went two innings handling the pitching duties for the Kiwanis with 12 total strikeouts between them.
The hitting was led by Sophie Svantesson who had 3 hits including a double as well as Hayley Krupienski and Rachel Bonfitto who reached base three times and scored 2 runs apiece. Leadoff hitter Grace David reached base twice and scored 2 runs for the well-balanced Kiwanis team. The win moved the Kiwanis record to 6-2 on the season.

Game Date: 5/21/17
Kiwanis 16, Hadley 3
The Kiwanis had a great all-around effort in their 16-3 win over Hadley. They continued their hot hitting as they scored 12 or more runs for the fourth consecutive game. Leadoff hitter Grace Trempe went 4 for 4 and scored 3 runs to lead the way. Ali Lakin had 3 hits for her best offensive output of the season while Sophia Smithies reached base 3 times and had two stolen bases.
The pitching was paced by Grace Leduc, who made her mound debut this year, Grace Tempe and Julia Bonfitto. The trio threw plenty of strikes only allowing 3 walks after the first inning. The win moved the Kiwanis record to 7-2 on the season.

Game Date: 5/21/17
Moe’s Westfield 7, Northampton 3
Moe’s got great pitching from Mia Tavares, Allie Stucenski, and Grace Burke to get by a very formidable Northampton team 7-3 to remain unbeaten. The pressure was on the Moe’s pitchers because they were going against an ace Northampton pitcher who struck out 9 of 10 Moe’s batters at one point. The trio of Moe’s pitchers had to hold the line and they did, limiting Northampton to only 3 runs. Burke closed out the game with two scoreless innings. Burke and Tavares also had the only two hits for Moe’s and both stole home as well. Caitlyn Arooth, Nathalie Senez and Nova Santiago-Scott also drove in runs with bases loaded walks. A key point in the game occurred in the top of the fifth inning with Moe’s clinging to a 4-3 lead. Grace Burke was called into the game to pitch. After walking the leadoff Northampton hitter the next batter hit a hard single to left where Camille Bruno made a great play to hold any further advancement. Northampton now had the tying run at third with no outs. From there Burke and catcher Allie Stucenski shut the door. Burke struck out the next two hitters with no passed balls to allow any steal of home. The next batter hit a grounder back to Burke who made a good throw to first.

Game date: 5/24/17
Moe’s Westfield 12, Gateway 1
Mia Tavares led the way with three hits including a triple, 2 RBIs, and a steal of home as Moe’s Westfield remained unbeaten with a 12-1 win at Gateway. Tavares also shined on the mound striking out three batters in a row to end the game. Grace Burke, Allie Stucenski, and Alaiyna Lapointe all had two hits for Moe’s while Camille Bruno added a double and pitched two scoreless innings. Caitlyn Arooth and Nova Santiago-Scott drove in runs with bases loaded walks while Katelyn Connor, Sara LaCross and Nathalie Senez each reached base multiple times. Another total team effort as Moe’s won for the eighth time in eight games.
Mia Tavares caught it and Moe’s escaped the jam. Moe’s added three runs in the bottom half of the 5th and Burke closed it out with no drama in the 6th to give Moe’s a very hard fought victory over a very tough opponent.

Game Day: 6/2/2017
Moe’s Westfield 12, Southampton 2
Grace Burke, Mia Tavares, and Camille Bruno each pitched two strong innings and shut down a good hitting Southampton team in a 12-2 win for Moe’s Westfield. The win kept Moe’s unbeaten on the season. Tavares also had two hits including a double. Allie Stucenski knocked in a run with a hit and also had a steal of home. Alaiyna Lapointe and Sara LaCross also had hits for Moe’s. Katelyn Connor and Caitlyn Arooth also drove in runs with a fielder’s choice while Connor, Burke, and Bruno drove in runs with bases loaded walks. Moe’s jumped out quick with four runs in the first two innings and never looked back in route to the win.

Game Date: 6/4/2017
Moe’s Westfield 12, Westfield Funeral Home 1
Allie Stucenski, Grace Burke and Camille Bruno led the way as Moe’s remained unbeaten with a 12-1 win over Westfield Funeral Home. Stucenski pitched two stellar shutout innings while also collecting two hits and five steals including one of home. Burke also had two shutout innings while crushing a double and triple and three runs batted in. Bruno had a single and double and two runs batted in. Alaiyna Lapointe and Katelyn Connor also had hits for Moe’s and Connor also had a steal of home. Nathalie Senez had two bases loaded walks to drive in runs while Sara LaCross and Caitlyn Arooth were each on base twice as well. Another great team effort by Moe’s.

12U Softball
Game Day 5/16/17
Easthampton One 4, Richards Jewelers 2
It was a defensive battle Tuesday night between Richards Jewelers and Easthampton One. Hits were hard to come by on both sides. Richards Moja Premney, Bella Delmonte, Amber Brown, and Izzy Lemelin all contributed with base hits. Paige Hutkoski pitched the first 2 innings striking out 2 and allowing only 1 run. Bella Delmonte pitched 3 strong innings striking out 8 batters and allowing only 3 runs. Izzy Lemelin made a great catch in left field and quick thinking by Charlotte Bouyea making a strong throw to Moja Premney at 3rd to put the tag down on an Easthampton player. Abby Menzel also made 2 outstanding catches of her own at first base.

Game Day 5/20/17
Richards Jewelers 14, MRAH 9
It was a perfect day for a ball game on Saturday afternoon when Richards Jewelers took on MRAH. Richards started out slow w/the bats in the 1st inning with MRAH retiring the first 3 batters in order. However, in the 2nd inning Bella Delmonte cranked a home run putting Richards on the board. They would score 13 more times in the game with hits by Charlotte Bouyea, Rhea Lynn Collingwood, Anita Bialas, Amber Brown, Kara Dougherty, Moja Premney, Abby Menzel, and a double by Paige Hutkoski. – Courtesy of Westfield Little League