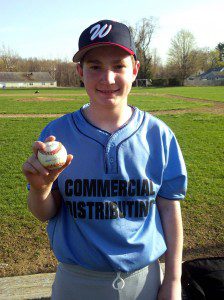 Commercial Distributing’s Ethan Dolan hit two home runs to lead his team to a 3-0 start on the season.

WHEELER DIVISION
April 28
Heritage Lawns 11, The Batter’s Box 10
Heritage Lawns edged The Batter’s Box in a very exciting game played at Cross Street. Heritage jumped out to a quick 4-0 lead, but The Batter’s Box came back and cut the lead in half with two runs of their own in the second inning. Ben Goyette and Nate Navarro each had sharp singles and scored in the inning, while Nate Pellegrini drove in a run with a line drive hit to left centerfield. After two more runs from Heritage in the third, the Boxers trimmed the lead to 6-5 with three runs in the bottom half of the inning. Dylan Shrimplin, Jackson Lambert and Garrett Barnachez all had consecutive hits and came around to score. After Heritage extended the lead to 11-5 in the fourth, the Boxmen chipped away with three runs in the bottom of the fourth and two more in the fifth but just fell short in the end. Tristan Rogers had a hit and scored a run in the fourth-inning rally while Pellegrini had a booming double to right, driving in Darin Towle (1 hit, 2 runs scored) in the fifth-inning uprising for the Batter’s Box. Goyette got the start on the mound for the Boxmen and pitched brilliantly over three innings. Towle came on to throw the final two innings and silenced the Heritage bats by striking out five and allowing no runs. Jackson Lambert turned in the defensive play of the game for the Boxers by snagging a line drive to third base and then throwing across the diamond to Luke Bonini at first to double off a Heritage runner. The loss dropped the Batter’s Box record to 1-2 on the young season.

April 28
Oasis Shower Doors 6, Fenway Westfield 4
Aaron Muldrew and Joey Masciadrelli both gave solid pitching performances for Fenway Westfield in the loss to Oasis Shower Doors. Zachary Edelson did an outstanding job as the closing pitcher. Noah Gardner did an excellent job as a first-time catcher. Derek O’Dea, Masciadrelli, Ryan LaPoint and Muldrew all made great defensive plays. Edelson, Jacob Kulas and Sean O’Keefe all contributed with base hits. Cooper Leclair had a bases-clearing double. O’Dea hit his second triple of this early season. The entire team did a great job scoring four runs in the last inning.

April 28
Anytime Fitness 8, Green Meadow Lumber 8
Anytime Fitness rallied from three runs down in the sixth to tie Green Meadow Lumber at Cross Street. Ethan Bauch capped a 2-for-3, 2-stolen base day with the game-tying run, scoring from second on a RBI ground out by Andrew Navarro. Anytime clean-up hitter Mike Durkee went 3-for-3 with three RBI, and Kareem Zaghloul went 1-for-1 with two walks, two stolen bases and three runs scored. Dakota Durkee went 1-for-1 with a walk and two steals. Pitchers Jeff Donahue and Will Brewster walked only one and struck out 12 over six innings.

April 21
Kitchens by Herzenberg 7, Fenway Westfield 3
Aaron Muldrew had an excellent start pitching performance for Fenway Westfield, giving up no runs in the first two innings. Ryan LaPoint had a great third inning with three strike outs and no runs. Joey Masciadrelli ended the game with a solid pitching performance. Cooper Leclair, Zachery Edelson, Anthony Garwacki and Derek O’Dea all made great defensive plays to keep the score close. LaPoint and Masciadrelli both had nice hits. Edelson, Sean O’Keefe and LaPoint all scored during the game.

MAJORS
April 27
Sons of Erin 2, Air Compressor 1
Brody Zabielski made his first-ever Majors start a memorable one, allowing only two hits and a single run over four innings to beat Air Compressor at Cross Street. Zabielski finished with six strikeouts, walking one. A two-out walk and double in the third accounted for Air Compressor’s only run. Sons of Erin (2-1) got all the runs it needed in the bottom of the first. Tanner Koziol led off with a single, scoring one out later when Jack Blake doubled off the fence in center. Blake moved around to score on a pair of passed balls. Sons threatened in the third when Jimmy Gaudreau singled hard to right field and Sean Leckie drew a walk, putting runners at first and second, but Air Compressor got out of the inning without giving up a run. In the fourth, Blake tripled to deep center with one out, but was stranded at third. Koziol relieved Zabielski in the fifth, retiring Air Compressor in order. Air Compressor stranded the tying run on second in the sixth.

April 27
Commercial Distributing 7, Camfour 4
Commercial Distributing moved to 3-0 with a dramatic 7-4 triumph over Camfour. The boys in blue exploded for five runs in the top of the sixth to take control of the game. After Matt Pelletier plated the tying run with a double to center, clean-up hitter Ethan Dolan smacked a grand slam to put the visitors in front. Parker Kelley had two extra-base hits for Commercial. He doubled in the third and fifth innings and singled in the sixth. David Reyes recorded the win for the Distributors, allowing one run over two innings. Reyes struck out four, walked two and gave up one hit. The sixth spelled defeat for Camfour, as Commercial grabbed the lead for good. Pelletier went 2-for-3. Krol’s bat was hot; he also went 2 for 3. Jake LaBombard was solid at the plate, he went 2 for 2, and drove in a run. Nicholas Cyr made positive contributions in the game, he scored a run.

April 25
Commercial Distributing 6, Westfield Police 4
Commercial Distributing (2-0) used a balanced attack to top Westfield Police 6-4 at Cross Street. David Reyes reached base two times, including a triple in the second inning. Logan Krol got it done on the mound on the way to the win. He allowed two runs over four innings, struck out six, walked three and surrendered three hits. The boys in blue didn’t relinquish the lead after scoring three runs in the fourth inning when they scored on a two-run double by David Tirrell and an RBI single by Ethan Dolan. Commercial sealed its lead with three runs in the fifth.
April 24
Kiwanis 12, Air Compressor 6
Kiwanis got in the win column with a victory over Air Compressor. Starting pitcher Jimmy Hagan struck out 13 and controlled the game from the mound. Matt Judd got the final two outs of the game to secure the win. Leading the offense for Kiwanis was Ryan Moorhouse, who had his second consecutive three-hit game while scoring three runs and driving in two. Hagan had two hits and a walk to reach base three times while driving in two runs. Ryan Rix continued his hot hitting, going 2-for-2 and driving in two runs. Tyler Cousineau had two hits and two runs batted in and Devin Dupuis had two walks and scored twice. In addition, Devan Nadeau had a walk and hit and Cameron Gourde added a single. Defensively, Brain Daly, Adam Masters and Rix had good games for the Kiwanis team.

April 22
Slovak 19, Kiwanis 11
Kiwanis faced a determined Slovak team and lost in a high-scoring game. Leading the Kiwanis offense was Ryan Rix, who went 3-for-3 with a double, two singles and two RBI. Ryan Moorhouse also went 3-for-3 with a run batted in. C.J. Skribiski had three hits, and Jimmy Hagan had two hits and a run batted in. Also chipping in with hits were Devan Nadeau and Brain Daly. Defensively, shortstop Hagan had a nice catch running over the middle to take away a Slovak hit and Ian Wilhoite had a nice running grab in center field. On the mound for Kiwanis was Rix, Moorhouse and Cameron Gourde, who combined for seven strikeouts.

SENIOR SOFTBALL
April 23
Kosinski Farms 14, Firtion Adams 0
The girls from Kosinski Farms made a strong season debut by blanking defending champion Firtion Adams in the first game of the 2013 season. Pitcher Taylor St. Jacques, being caught by rookie Diana Shia, frustrated the team all game, striking out 12 and for a no-hitter. On the flip side, Kosinski Farms jumped on the board early, starting the game with seven consecutive hits and plating eight runs. Combined with a strong defense, the team fought hard to ensure the victory. Jill McCormick paced the offense by getting on base four consecutive times, including two singles and two walks. Sara Mulligan reached base in each of her three at-bats, scoring twice. Overall, a very well played game by all.

April 23
Kosinski Farms 14, Firtion Adams 0
The girls from Kosinski Farms made a strong season debut by blanking defending champion Firtion Adams in the first game of the 2013 season. Pitcher Taylor St. Jacques, being caught by rookie Diana Shia, frustrated the team all game, striking out 12 and for a no-hitter. On the flip side, Kosinski Farms jumped on the board early, starting the game with seven consecutive hits and plating eight runs. Combined with a strong defense, the team fought hard to ensure the victory. Jill McCormick paced the offense by getting on base four consecutive times, including two singles and two walks. Sara Mulligan reached base in each of her three at-bats, scoring twice. Overall, a very well played game by all.

April 28
Kosinski Farms 14, Easthampton Taylor Agency 3
Kosinski Farms started a twin bill with a tough game against a gritty team from Easthampton. Before the game, the coach of Kosinski Farms surprised one of his starting pitchers by informing her that she would be playing for Easthampton — as their pitcher! Sam Schieppe did a terrific job holding her own team to minimal damage while plating a run herself. Meanwhile, Diana Shia started for the first time this season and limited Easthampton to two runs in two innings before yielding to Taylor St. Jacques to finish. Offense was the key factor to the win though. Alexis Shia had a great game at the plate with two runs and two RBI. Carlan Gideon pushed two across with her two hits, to go along with a strong defensive showing at third base. Just a great performance by players on both sides!
COURTESY OF WESTFIELD LITTLE LEAGUE