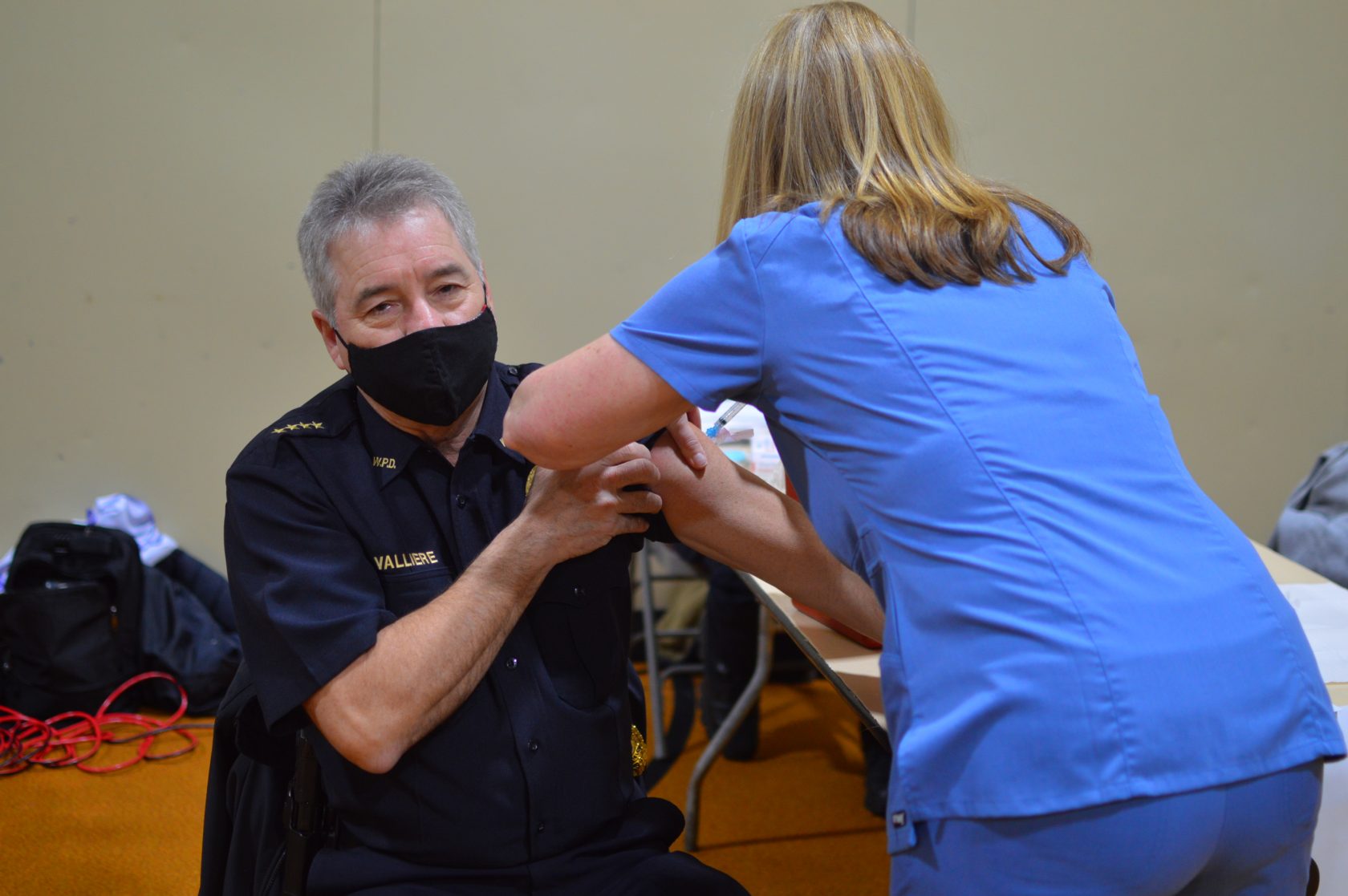 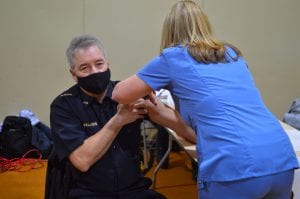 AGAWAM- First responders from Westfield and Southwick received their first doses of the COVID-19 vaccine Jan. 13.

Approximately 400 doses of the Moderna COVID-19 vaccine were administered at the Bethany Assembly of God church in Agawam Wednesday. First responders from Westfield, Southwick, Agawam, Blandford, Montgomery, Russell, Munson, the Westover Air Reserve Base and Westfield Barnes Regional Airport were able to participate.

The vaccine clinic was organized in part by Agawam Fire Chief Alan Sirois. Per the current vaccine guidelines, a department would not be able to receive their first vaccine doses unless they were able to order and administer at least 200 doses. None of the communities involved would have met the 200-person threshold by themselves with their first responders.

Sirois then reached out to other local departments to form a collaborative to meet that threshold. Between each community, 400 people received the vaccine Wednesday.

“It’s a major undertaking to get to this point,” said Sirois. 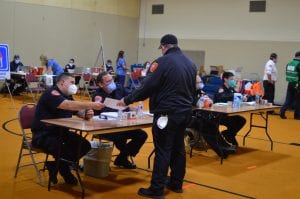 A Southwick firefighter does the final screening before he walks to the vaccination stations, seen in the background. (PETER CURRIER PHOTO)

Rather than having every first responder show up and wait in a line, each person was given a time slot. When they arrived they checked in before being pre-screened and asked if they have any possible allergies to the vaccine. They were then sent to one of the vaccine stations where they received their first dose. Each person then sat in another room for 15 minutes under observation to make sure that there were no immediate reactions to the vaccine.

Egloff said that there were a few people that displayed a reaction to the vaccine. From what he and others could tell those people tended to be those who had already had COVID-19 at some point. He said he is unsure if that is the case for everybody.

Because they received the Moderna vaccine, they will need to return 28 days later to receive the second dose, which will increase the effectiveness of the vaccine to 90 percent.

Sirois said that only about 50 to 60 percent of his first responders were initially interested in getting the vaccine. As the day of the clinic drew closer, that number increased. Much of the anxiety surrounding the existing COVID-19 vaccines stems from the speed at which they were developed.

Egloff said that a similar scenario played out among Westfield firefighters, though there was a higher initial interest in getting the vaccine. He said approximately 80 percent of the department received their shot. Approximately 70% of Southwick first responders received the vaccine.

It was only on Jan. 11 of 2020, just over one year ago, that the genome for the coronavirus was sequenced and published by Chinese researchers. The vaccine’s development was based on nearly two decades of research stemming from the SARS outbreak of 2003.

“The more people that get this vaccine, the faster we can get back to normal life,” said Egloff.