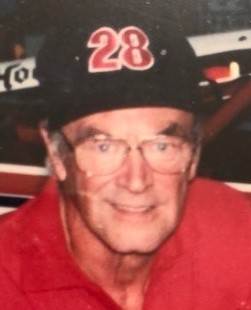 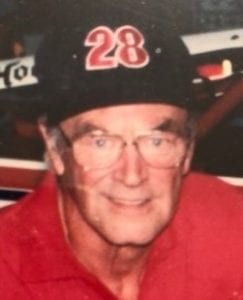 An avid NASCAR enthusiast, Luther’s favorite activity was auto racing. From an early age, he enjoyed tinkering with cars, especially his 1956 Ford. His tinkering evolved into being the proud owner of NASCAR Modified #28 that raced at Riverside Speedway for more than 40 years. In 1999, he was inducted into the Riverside Park Speedway Hall of Fame. Luther also loved all things country and western. At young age he started riding horses and developed into an accomplished horseback rider, competing in many competitions as a barrel racer. Always wearing cowboy boots, Luther amassed an envious collection of cowboy boots and cowboy hats that he proudly displayed in his home. Luther, who could often be seen driving his red truck “Big Ed” around town, also enjoyed hunting, fishing, gardening, and watching the Red Sox and Patriots. He looked forward to his annual hunting trip with Dickie and Bomber in the “Bucksnort” and getting together at Mrs. Murphy’s with his 3 o’clock coffee group to discuss current events and to solve all the world’s problems. Luther was active in 4-H and attended schools in Southwick and Agawam. Following in his uncle’s footsteps, who was the Southwick Fire Chief, Luther became a volunteer firefighter and EMT, retiring as Captain.

Luther served 2 years in the Army during the Vietnam conflict, and was recently re-elected as Water Commissioner for the Town of Southwick, a position he held for 34 years. Luther worked at many local auto dealerships as a mechanic, for the Town of Southwick Highway Department, and for Victor Coffee Co., delivering coffee throughout New England. In his retirement, Luther drove a school bus for the Southwick-Tolland Regional School District and was a maintenance worker for Edgewood Golf Course.

The visiting hours will be this Thursday, August 13, from 4-7 PM at Southwick Forastiere Funeral Home, 624 College Highway, Southwick. (masks and social distancing required). A graveside committal will take place at a later date. Donations in memory of Luther may be made to the Southwick Fireman’s Association. For more information or to leave an online condolence, please visit www.forastiere.com