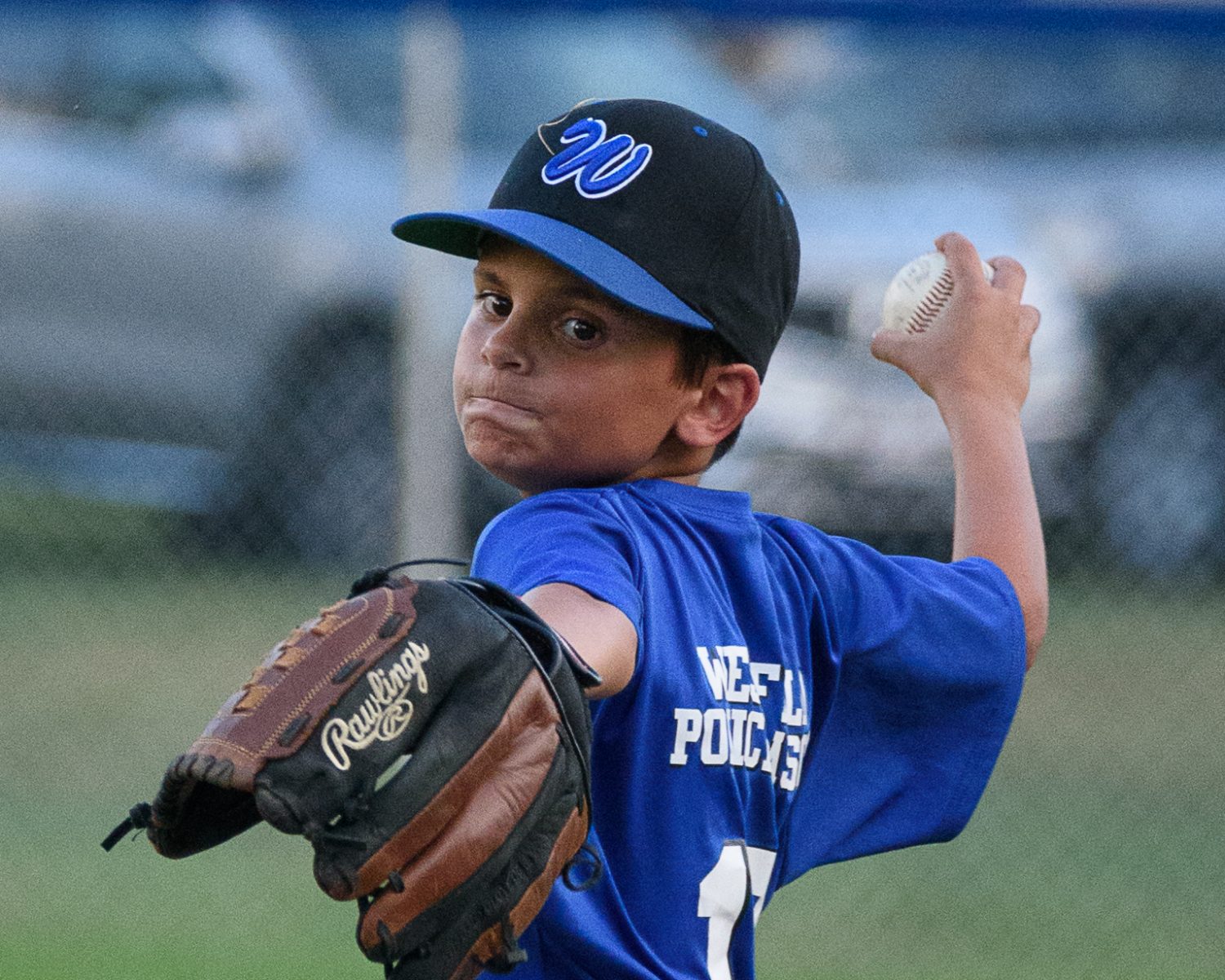 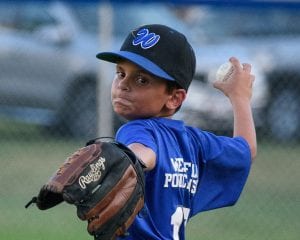 Oliver Cammisa is all determination on the mound.

WESTFIELD – The latest showdown on the Westfield Little League Baseball circuit was not all for naught, but rather all for knot.
Two of the Minors Division’s finest, Westfield Police and CSC Force fought and scrapped and battled to a 2-2 tie Monday night at Ralph E. Sanville Memorial Field.
Both teams were ready to compete from the get-go.
Westfield Police threatened with two outs, putting base runners on with a Dylan Rozell walk and Dustin Piper single through the left side of the infield. CSC starting pitcher Devin Clark got out of the jam with a strikeout.
CSC Force also jammed up the bases, filling them with a Sky Davis single to left-center field, a soft hit to the shortstop from Connor Slavin, and a walk from Ethan McArdle – all with two outs. Westfield Police starter Oliver Cammisa extinguished the threat though with a strikeout to end the inning.
With one out in the second, Westfield Police loaded the bases with walks from Brendan Jones and Riley Pease, sandwiched around a free pass to Lucas Mancino, courtesy of a hit-by-pitch. CSC reliever Alex Miller bounced back though with two straight Ks to end the inning.
Cammisa remained effective on the mound. In the bottom half of the second, with a couple of base runners on, the CSC Force pitcher recorded a strikeout to keep the game scoreless.
Meanwhile, Miller hit his groove on the mound, retiring the side 1-2-3 in the third inning. It was the CSC Force pitcher’s fifth consecutive K.
Then with the bat, Miller moved and grooved his way to home plate. The CSC Force speedster helped manufacture the game’s first run with an infield single, soon advancing to second and third bases on wild pitches, and scoring on a Devin Clark single to left field.
CSC Force must have eaten their Wheaties because they were dealing special Ks.
CSC Force continued to whiff the opposition as the game progressed with reliever Logan Bard retiring the side on strikeouts in the fourth, culminating in the team’s eighth straight strikeout.
With walks to Connor Slavin and Parker Stopa wrapped around another Miller single in the fourth, this time to center field, CSC loaded the bases in the bottom half of the fourth. Devin Clark drew a bases-loaded walk to make it 2-0.
Westfield Police continued to chase the lead and finally caught up to its opponent in the fifth inning with a sac-RBI from Cammisa and a run-scoring hit from Austin Sadowski. Brendan Jones and Riley Pease, who each reached on walks to begin the inning, crossed home plate.
Westfield Police had its fair share of solid pitching throughout the contest. Reliever Dustin Piper, who came on to strike out two batters in the fourth, struck out the next three batters he faced in the fifth to keep the game tied at 2-all.
The arms race continued in the final inning.
Stopa retired the side 1-2-3 in the sixth, two via the K to keep the opposition off the board. Piper retired all three batters he faced in the last half of the sixth, the final two via the strikeout.