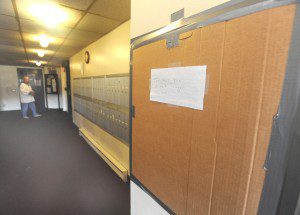 A mailbox in the lobby of the Washington House has been covered and a note stating “This mailbox is not (sic) longer in use” was posted after residents found that bill payments mailed from the box have not reached their creditors. (Photo by Carl E. Hartdegen)

WESTFIELD – Residents of the Washington House will have to walk outside to the curb to mail their letters in the future after a mailbox in their lobby was compromised.
Two residents, who asked to remain anonymous, said that they have found that bill payments posted from the lobby mailbox have not been received by their creditors.
One of the women said that she made a transaction at her bank and, when she checked her balance, said to herself “Why is all this money in my account?”
The woman said that she found that the reason her account was flush was because checks she had sent to pay bills had not been cashed.
The woman said that she questioned her neighbors at her apartment building and found that five or six residents said that about 15 checks which had been mailed in the lobby mailbox had not been cashed.
“None of us can afford to stop payment on these checks plus pay the late charges” generated by the missed payments, she said.
The second woman said that she filed an on-line complaint with postal inspectors and subsequently spoke with a worker at the post office who said that he would investigate the problem.
Jack Seaver, a customer service supervisor at the Westfield Post office said, in a brief telephone interview, that the mailbox was closed because “we’ve gotten too many complaints.”
Seaver said that the mailbox is not owned by the post office although postal workers had a key and collected outgoing mail from the box.
“We obviously did not have the only key” Seaver said “or somebody had a way of getting into it” so the box was closed permanently.
Seaver points out that there is a U.S.P.S., mailbox on the sidewalk directly outside the main entrance to the building so the residents will not be seriously inconvenienced by the closure.